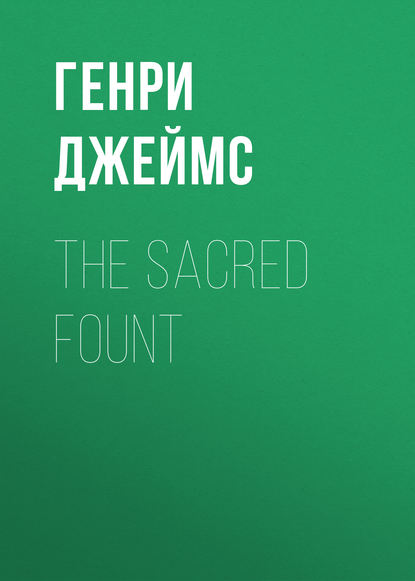 He looked at me on this as if I had brought him back to a mere detail, and after an instant the light went out of his face. "So it is. I leave it to you. I don't care." His drop had the usual suddenness of the drops of the artistic temperament. "Look for the last man," he nevertheless, but with more detachment, added. "I daresay it would be he."

"The last? In what sense the last?"

"Well, the last sort of creature who could be believed of her."

"Oh," I rejoined as we went on, "the great bar to that is that such a sort of creature as the last won't be here!"

He hesitated. "So much the better. I give him, at any rate, wherever he is, up to you."

"Thank you," I returned, "for the beauty of the present! You do see, then, that our psychologic glow doesn't, after all, prevent the thing–"

"Why, that's what I was telling you," I impatiently exclaimed, "that I feel!"

THE first thing that happened to me after parting with him was to find myself again engaged with Mrs. Brissenden, still full of the quick conviction with which I had left her. "It is she—quite unmistakably, you know. I don't see how I can have been so stupid as not to make it out. I haven't your cleverness, of course, till my nose is rubbed into a thing. But when it is—!" She celebrated her humility in a laugh that was proud. "The two are off together."

"I don't know where, but I saw them a few minutes ago most distinctly 'slope.' They've gone for a quiet, unwatched hour, poor dears, out into the park or the gardens. When one knows it, it's all there. But what's that vulgar song?—'You've got to know it first!' It strikes me, if you don't mind my telling you so, that the way you get hold of things is positively uncanny. I mean as regards what first marked her for you."

"But, my dear lady," I protested, "nothing at all first marked her for me. She isn't marked for me, first or last. It was only you who so jumped at her."

My interlocutress stared, and I had at this moment, I remember, an almost intolerable sense of her fatuity and cruelty. They were all unconscious, but they were, at that stage, none the less irritating. Her fine bosom heaved, her blue eyes expanded with her successful, her simplified egotism. I couldn't, in short, I found, bear her being so keen about Mrs. Server while she was so stupid about poor Briss. She seemed to recall to me nobly the fact that she hadn't a lover. No, she was only eating poor Briss up inch by inch, but she hadn't a lover. "I don't," I insisted, "see in Mrs. Server any of the right signs."

She looked almost indignant. "Even after your telling me that you see in Lady John only the wrong ones?"

"Ah, but there are other women here than Mrs. Server and Lady John."

"Certainly. But didn't we, a moment ago, think of them all and dismiss them? If Lady John's out of the question, how can Mrs. Server possibly not be in it? We want a fool–"

"Ah, do we?" I interruptingly wailed.

"Why, exactly by your own theory, in which you've so much interested me! It was you who struck off the idea."

"That we want a fool?" I felt myself turning gloomy enough. "Do we really want anyone at all?"

She gave me, in momentary silence, a strange smile. "Ah, you want to take it back now? You're sorry you spoke. My dear man, you may be–" but that didn't hinder the fact, in short, that I had kindled near me a fine, if modest and timid, intelligence. There did remain the truth of our friend's striking development, to which I had called her attention. Regretting my rashness didn't make the prodigy less. "You'll lead me to believe, if you back out, that there's suddenly someone you want to protect. Weak man," she exclaimed with an assurance from which, I confess, I was to take alarm, "something has happened to you since we separated! Weak man," she repeated with dreadful gaiety, "you've been squared!"

I literally blushed for her. "Squared?"

"Does it inconveniently happen that you find you're in love with her yourself?"

"Well," I replied on quick reflection, "do, if you like, call it that; for you see what a motive it gives me for being, in such a matter as this wonderful one that you and I happened to find ourselves for a moment making so free with, absolutely sure about her. I am absolutely sure. There! She won't do. And for your postulate that she's at the present moment in some sequestered spot in Long's company, suffer me without delay to correct it. It won't hold water. If you'll go into the library, through which I have just passed, you'll find her there in the company of the Comte de Dreuil."

Mrs. Briss stared again. "Already? She was, at any rate, with Mr. Long, and she told me on my meeting them that they had just come from the pastels."

"Exactly. They met there—she and I having gone together; and they retired together under my eyes. They must have parted, clearly, the moment after."

She took it all in, turned it all over. "Then what does that prove but that they're afraid to be seen?"

"Ah, they're not afraid, since both you and I saw them!"

"Oh, only just long enough for them to publish themselves as not avoiding each other. All the same, you know," she said, "they do."

"Do avoid each other? How is your belief in that," I asked, "consistent with your belief that they parade together in the park?"

"They ignore each other in public; they foregather in private."

"Ah, but they don't—since, as I tell you, she's even while we talk the centre of the mystic circle of the twaddle of M. de Dreuil; chained to a stake if you can be. Besides," I wound up, "it's not only that she's not the 'right fool'—it's simply that she's not a fool at all. We want the woman who has been rendered most inane. But this lady hasn't been rendered so in any degree. She's the reverse of inane. She's in full possession."

"In full possession of what?"

I had unfortunately to discriminate here. "No, not like Lady John."

She only looked at me a little, handsome and hard. "If you wished to satisfy me so easily you shouldn't have made such a point of working me up. I daresay I, after all, however," she added, "notice more things than you."

"Well, May Server last evening. I was not quite conscious at the time that I did, but when one has had the 'tip' one looks back and sees things in a new light."

It was doubtless because my friend irritated me more and more that I met this with a sharpness possibly excessive. "She's perfectly natural. What I saw was a test. And so is he."

But she gave me no heed. "If there hadn't been so many people I should have noticed of myself after dinner that there was something the matter with her. I should have seen what it was. She was all over the place."

She expressed it as the poor lady's other critic had done, but this didn't shut my mouth. "Ah, then, in spite of the people, you did notice. What do you mean by 'all over the place'?"

"She couldn't keep still. She was different from the woman one had last seen. She used to be so calm—as if she were always sitting for her portrait. Wasn't she in fact always being painted in a pink frock and one row of pearls, always staring out at you in exhibitions, as if she were saying 'Here they are again'? Last night she was on the rush."

"Yes, positively—from one man to another. She was on the pounce. She talked to ten in succession, making up to them in the most extraordinary way and leaving them still more crazily. She's as nervous as a cat. Put it to any man here, and see if he doesn't tell you."

"I should think it quite unpleasant to put it to any man here," I returned; "and I should have been sure you would have thought it the same. I spoke to you in the deepest confidence."

Mrs. Brissenden's look at me was for a moment of the least accommodating; then it changed to an intelligent smile. "How you are protecting her! But don't cry out," she added, "before you're hurt. Since your confidence has distinguished me—though I don't quite see why—you may be sure I haven't breathed. So I all the more resent your making me a scene on the extraordinary ground that I've observed as well as yourself. Perhaps what you don't like is that my observation may be turned on you. I confess it is."