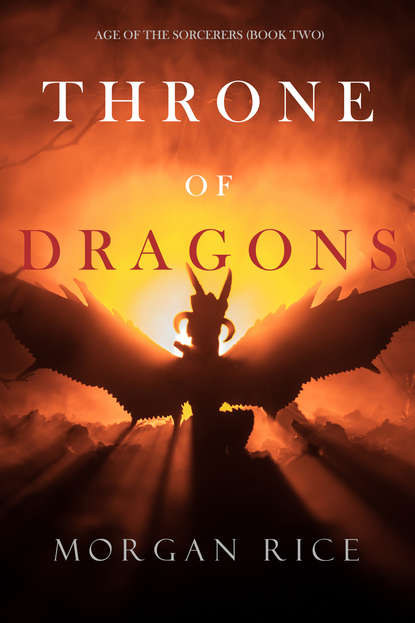 Age of the Sorcerers #2
“Has all the ingredients for an instant success: plots, counterplots, mystery, valiant knights, and blossoming relationships replete with broken hearts, deception and betrayal. It will keep you entertained for hours, and will satisfy all ages. Recommended for the permanent library of all fantasy readers.”

–-Books and Movie Reviews, Roberto Mattos (re The Sorcerer’s Ring)

“The beginnings of something remarkable are there.”

–-San Francisco Book Review (re A Quest of Heroes)

From #1 bestseller Morgan Rice, author of A Quest of Heroes (over 1,300 five star reviews) comes a startlingly new fantasy series.

In THRONE OF DRAGONS (Age of the Sorcerers—Book Two) King Godwin mobilizes his army to cross the great bridge and invade the South to rescue his 17 year old daughter, Lenore. But Lenore is imprisoned deep in the South, under the watchful and hateful eye of King Ravin, and she may have to learn to escape herself first if she has any chance of escape.

Her brother Rodry, though, is way ahead of the King’s men, deep in hostile territory, alone on a mission to save his sister—while her other brother, Vars, offers a lesson in cowardice and betrayal.

Devin follows Gray, eager to learn more about how to harness his powers and about who he is.

Greave travels to remote regions to find the house of scholars and to try to save his sister, Nerra.

But Nerra, sickened by the scale sickness, is dying on a remote isle once touched by dragons. And her only chance of survival may just compel her to risk it all.

And all of this will culminate in an epic battle that may just determine the fate of the two kingdoms.

AGE OF THE SORCERERS weaves an epic sage of love, of passion, of sibling rivalry; of rogues and hidden treasure; of monks and warriors; of honor and glory, and of betrayal, fate and destiny. It is a tale you will not put down until the early hours, one that will transport you to another world and have you fall in in love with characters you will never forget. It appeals to all ages and genders.

Book #3 (BORN OF DRAGONS) is now available for pre-order.

“A spirited fantasy ….Only the beginning of what promises to be an epic young adult series.”

–-Midwest Book Review (re A Quest of Heroes)

“Action-packed …. Rice's writing is solid and the premise intriguing.”

–-Publishers Weekly (re A Quest of Heroes)

Throne of Dragons (Age of the Sorcerers—Book Two)

“If you thought that there was no reason left for living after the end of THE SORCERER’S RING series, you were wrong. In RISE OF THE DRAGONS Morgan Rice has come up with what promises to be another brilliant series, immersing us in a fantasy of trolls and dragons, of valor, honor, courage, magic and faith in your destiny. Morgan has managed again to produce a strong set of characters that make us cheer for them on every page.…Recommended for the permanent library of all readers that love a well-written fantasy.”

“An action packed fantasy sure to please fans of Morgan Rice’s previous novels, along with fans of works such as THE INHERITANCE CYCLE by Christopher Paolini…. Fans of Young Adult Fiction will devour this latest work by Rice and beg for more.”

–-The Wanderer,A Literary Journal (regarding Rise of the Dragons)

“A spirited fantasy that weaves elements of mystery and intrigue into its story line. A Quest of Heroes is all about the making of courage and about realizing a life purpose that leads to growth, maturity, and excellence….For those seeking meaty fantasy adventures, the protagonists, devices, and action provide a vigorous set of encounters that focus well on Thor's evolution from a dreamy child to a young adult facing impossible odds for survival….Only the beginning of what promises to be an epic young adult series.”

“THE SORCERER’S RING has all the ingredients for an instant success: plots, counterplots, mystery, valiant knights, and blossoming relationships replete with broken hearts, deception and betrayal. It will keep you entertained for hours, and will satisfy all ages. Recommended for the permanent library of all fantasy readers.”

“In this action-packed first book in the epic fantasy Sorcerer's Ring series (which is currently 14 books strong), Rice introduces readers to 14-year-old Thorgrin "Thor" McLeod, whose dream is to join the Silver Legion, the elite knights who serve the king…. Rice's writing is solid and the premise intriguing.”

AGE OF THE SORCERERS

OLIVER BLUE AND THE SCHOOL FOR SEERS