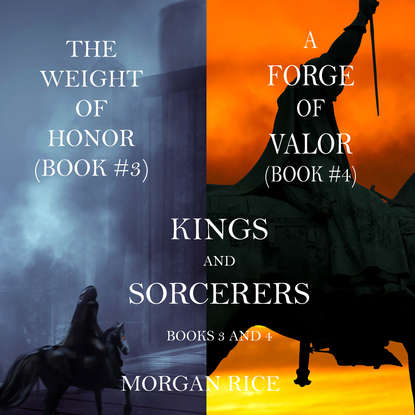 “An action packed fantasy sure to please fans of Morgan Rice’s previous novels, along with fans of works such as The Inheritance Cycle by Christopher Paolini…. Fans of Young Adult Fiction will devour this latest work by Rice and beg for more.”
–The Wanderer, A Literary Journal (regarding Rise of the Dragons)


A bundle of books 3 and 4 in Morgan Rice’s #1 Bestselling fantasy series KINGS AND SORCERERS (RISE OF THE VALIANT and THE WEIGHT OF HONOR). Here are two bestselling novels, all in one convenient file.


In THE WEIGHT OF HONOR, Kyra finally meets her cryptic uncle, and is shocked to discover he is not the man she expected. She embarks on a period of training which will test her stamina and her frustration, as she soon encounters the limits of her power. Duncan must descend the peaks of Kos with his new army and, vastly outnumbered, launch a risky invasion on the capital. If he wins, waiting behind its ancient walls, he knows, will be the old king and his nest of nobles and aristocrats, all with their own agendas, all of them as quick to betray as they are to embrace. Alec, in Ur, must tap his unique skills in the forge to aid the resistance if they have any chance of defending against the looming Pandesian invasion. Merk finally enters the tower of Ur, and is stunned by what he discovers. Vesuvius leads his Troll nation across a vulnerable Escalon, devastating the land, while Theos, enraged at what becomes of his son, is on a rampage himself, and will not stop until all of Escalon is aflame.


In A FORGE OF VALOR, Kyra slowly returns from the verge of death, healed by Kyle’s love and mysterious power. As he sacrifices for her, she regains her strength—yet not without a price. She presses Alva for the secret of her lineage, and he finally reveals all about her mother. Aidan, Motley at his side, strives to rescue his father, trapped in the perilous capital, while in the far corner of the kingdom, Merk, amazed by what he discovers in the Tower of Ur, braces himself against a massive troll invasion. Dierdre finds herself facing a full-fledged Pandesian invasion in her embattled city of Ur.


With its strong atmosphere and complex characters, KINGS AND SORCERERS is a sweeping saga of knights and warriors, of kings and lords, of honor and valor, of magic, destiny, monsters and dragons. It is fantasy at its finest, inviting us into a world that will live with us forever, one that appeals to all ages and genders.