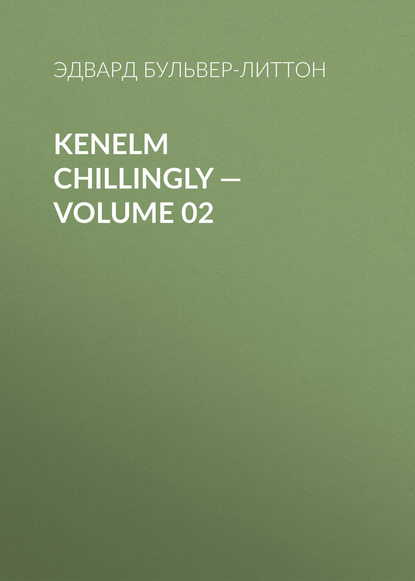 KENELM CHILLINGLY had quitted the paternal home at daybreak before any of the household was astir. "Unquestionably," said he, as he walked along the solitary lanes,—"unquestionably I begin the world as poets begin poetry, an imitator and a plagiarist. I am imitating an itinerant verse-maker, as, no doubt, he began by imitating some other maker of verse. But if there be anything in me, it will work itself out in original form. And, after all, the verse-maker is not the inventor of ideas. Adventure on foot is a notion that remounts to the age of fable. Hercules, for instance; that was the way in which he got to heaven, as a foot-traveller. How solitary the world is at this hour! Is it not for that reason that this is of all hours the most beautiful?"

Here he paused, and looked around and above. It was the very height of summer. The sun was just rising over gentle sloping uplands. All the dews on the hedgerows sparkled. There was not a cloud in the heavens. Up rose from the green blades of corn a solitary skylark. His voice woke up the other birds. A few minutes more and the joyous concert began. Kenelm reverently doffed his hat, and bowed his head in mute homage and thanksgiving.

ABOUT nine o'clock Kenelm entered a town some twelve miles distant from his father's house, and towards which he had designedly made his way, because in that town he was scarcely if at all known by sight, and he might there make the purchases he required without attracting any marked observation. He had selected for his travelling costume a shooting-dress, as the simplest and least likely to belong to his rank as a gentleman. But still in its very cut there was an air of distinction, and every labourer he had met on the way had touched his hat to him. Besides, who wears a shooting-dress in the middle of June, or a shooting-dress at all, unless he be either a game-keeper or a gentleman licensed to shoot?

Kenelm entered a large store-shop for ready-made clothes and purchased a suit such as might be worn on Sundays by a small country yeoman or tenant-farmer of a petty holding,—a stout coarse broadcloth upper garment, half coat, half jacket, with waistcoat to match, strong corduroy trousers, a smart Belcher neckcloth, with a small stock of linen and woollen socks in harmony with the other raiment. He bought also a leathern knapsack, just big enough to contain this wardrobe, and a couple of books, which with his combs and brushes he had brought away in his pockets; for among all his trunks at home there was no knapsack.

These purchases made and paid for, he passed quickly through the town, and stopped at a humble inn at the outskirt, to which he was attracted by the notice, "Refreshment for man and beast." He entered a little sanded parlour, which at that hour he had all to himself, called for breakfast, and devoured the best part of a fourpenny loaf with a couple of hard eggs.

Thus recruited, he again sallied forth, and deviating into a thick wood by the roadside, he exchanged the habiliments with which he had left home for those he had purchased, and by the help of one or two big stones sunk the relinquished garments into a small but deep pool which he was lucky enough to find in a bush-grown dell much haunted by snipes in the winter.

"Now," said Kenelm, "I really begin to think I have got out of myself. I am in another man's skin; for what, after all, is a skin but a soul's clothing, and what is clothing but a decenter skin? Of its own natural skin every civilized soul is ashamed. It is the height of impropriety for any one but the lowest kind of savage to show it. If the purest soul now existent upon earth, the Pope of Rome's or the Archbishop of Canterbury's, were to pass down the Strand with the skin which Nature gave to it bare to the eye, it would be brought up before a magistrate, prosecuted by the Society for the Suppression of Vice, and committed to jail as a public nuisance.

"Decidedly I am now in another man's skin. Kenelm Chillingly, I no longer

With light step and elated crest, the wanderer, thus transformed, sprang from the wood into the dusty thoroughfare. He had travelled on for about an hour, meeting but few other passengers, when he heard to the right a loud shrill young voice, "Help! help! I will not go; I tell you, I will not!" Just before him stood, by a high five-barred gate, a pensive gray cob attached to a neat-looking gig. The bridle was loose on the cob's neck. The animal was evidently accustomed to stand quietly when ordered to do so, and glad of the opportunity.

The cries, "Help, help!" were renewed, mingled with louder tones in a rougher voice, tones of wrath and menace. Evidently these sounds did not come from the cob. Kenelm looked over the gate, and saw a few yards distant in a grass field a well-dressed boy struggling violently against a stout middle-aged man who was rudely hauling him along by the arm.

The chivalry natural to a namesake of the valiant Sir Kenelm Digby was instantly aroused. He vaulted over the gate, seized the man by the collar, and exclaimed, "For shame! what are you doing to that poor boy? let him go!"

"Why the devil do you interfere?" cried the stout man, his eyes glaring and his lips foaming with rage. "Ah, are you the villain? yes, no doubt of it. I'll give it to you, jackanapes," and still grasping the boy with one hand, with the other the stout man darted a blow at Kenelm, from which nothing less than the practised pugilistic skill and natural alertness of the youth thus suddenly assaulted could have saved his eyes and nose. As it was, the stout man had the worst of it: the blow was parried, returned with a dexterous manoeuvre of Kenelm's right foot in Cornish fashion, and /procumbit humi bos/; the stout man lay sprawling on his back. The boy, thus released, seized hold of Kenelm by the arm, and hurrying him along up the field, cried, "Come, come before he gets up! save me! save me!" Ere he had recovered his own surprise, the boy had dragged Kenelm to the gate, and jumped into the gig, sobbing forth, "Get in, get in, I can't drive; get in, and drive—you. Quick! Quick!"

"Get in, or I shall go mad." Kenelm obeyed; the boy gave him the reins, and seizing the whip himself, applied it lustily to the cob. On sprang the cob. "Stop, stop, stop, thief! villain! Holloa! thieves! thieves! thieves! stop!" cried a voice behind. Kenelm involuntarily turned his head and beheld the stout man perched upon the gate and gesticulating furiously. It was but a glimpse; again the whip was plied, the cob frantically broke into a gallop, the gig jolted and bumped and swerved, and it was not till they had put a good mile between themselves and the stout man that Kenelm succeeded in obtaining possession of the whip and calming the cob into a rational trot.

"Young gentleman," then said Kenelm, "perhaps you will have the goodness to explain."

"By and by; get on, that's a good fellow; you shall be well paid for it, well and handsomely."

Quoth Kenelm, gravely, "I know that in real life payment and service naturally go together. But we will put aside the payment till you tell me what is to be the service. And first, whither am I to drive you? We are coming to a place where three roads meet; which of the three shall I take?"

"I don't swear except when I am in a passion, which, I am sorry to say, is very seldom; and I don't promise till I know what I promise; neither do I go on driving runaway boys in other men's gigs unless I know that I am taking them to a safe place, where their papas and mammas can get at them."

"I have no papa, no mamma," said the boy, dolefully and with quivering lips.

"Poor boy! I suppose that burly brute is your schoolmaster, and you are running away home for fear of a flogging."

The boy burst out laughing; a pretty, silvery, merry laugh: it thrilled through Kenelm Chillingly. "No, he would not flog me: he is not a schoolmaster; he is worse than that."

"Hum! uncles are proverbial for cruelty; were so in the classical days, and Richard III. was the only scholar in his family."

"Eh! classical and Richard III.!" said the boy, startled, and looking attentively at the pensive driver. "Who are you? you talk like a gentleman."

"I beg pardon. I'll not do so again if I can help it."—"Decidedly," thought Kenelm, "I am beginning to be amused. What a blessing it is to get into another man's skin, and another man's gig too!" Aloud, "Here we are at the fingerpost. If you are running away from your uncle, it is time to inform me where you are running to."

Here the boy leaned over the gig and examined the fingerpost. Then he clapped his hands joyfully.

"All right! I thought so, 'To Tor-Hadham, eighteen miles.' That's the road to 'Tor-Hadham."

"Do you mean to say I am to drive you all that way,—eighteen miles?"

"And to whom are you going?"

"I will tell you by and by. Do go on; do, pray. I can't drive—never drove in my life—or I would not ask you. Pray, pray, don't desert me! If you are a gentleman you will not; and if you are not a gentleman, I have got L10 in my purse, which you shall have when I am safe at Tor-Hadham. Don't hesitate: my whole life is at stake!" And the boy began once more to sob.

Kenelm directed the pony's head towards Tor-Hadham, and the boy ceased to sob.

"You are a good, dear fellow," said the boy, wiping his eyes. "I am afraid I am taking you very much out of your road."

"I have no road in particular, and would as soon go to Tor-Hadham, which I have never seen, as anywhere else. I am but a wanderer on the face of the earth."

"Have you lost your papa and mamma too? Why, you are not much older than I am."

"Little gentleman," said Kenelm, gravely, "I am just of age, and you, I suppose, are about fourteen."