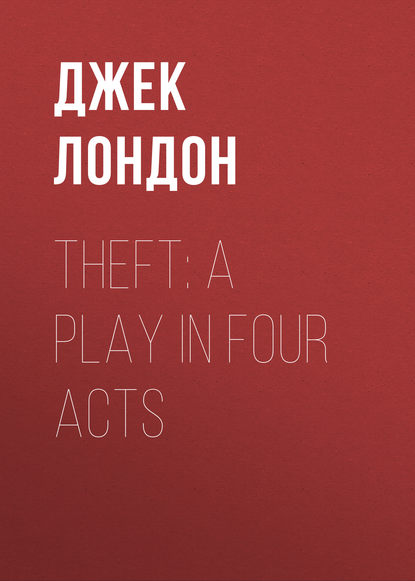 Theft: A Play In Four Acts

A Congressman from Oregon

Son of Margaret and Senator Chalmers

A great magnate, and father of Margaret Chalmers

Margaret Chalmers. Twenty-seven years of age; a strong, mature woman, but quite feminine where her heart or sense of beauty are concerned. Her eyes are wide apart. Has a dazzling smile, which she knows how to use on occasion. Also, on occasion, she can be firm and hard, even cynical An intellectual woman, and at the same time a very womanly woman, capable of sudden tendernesses, flashes of emotion, and abrupt actions. She is a finished product of high culture and refinement, and at the same time possesses robust vitality and instinctive right-promptings that augur well for the future of the race.

Howard Knox. He might have been a poet, but was turned politician. Inflamed with love for humanity. Thirty-five years of age. He has his vision, and must follow it. He has suffered ostracism because of it, and has followed his vision in spite of abuse and ridicule. Physically, a well-built, powerful man. Strong-featured rather than handsome. Very much in earnest, and, despite his university training, a trifle awkward in carriage and demeanor, lacking in social ease. He has been elected to Congress on a reform ticket, and is almost alone in fight he is making. He has no party to back him, though he has a following of a few independents and insurgents.

Thomas Chalmers. Forty-five to fifty years of age. Iron-gray mustache. Slightly stout. A good liver, much given to Scotch and soda, with a weak heart. Is liable to collapse any time. If anything, slightly lazy or lethargic in his emotional life. One of the "owned" senators representing a decadent New England state, himself master of the state political machine. Also, he is nobody's fool. He possesses the brain and strength of character to play his part. His most distinctive feature is his temperamental opportunism.

Master Thomas Chalmers. Six years of age. Sturdy and healthy despite his grandmother's belief to the contrary.

Ellery Jackson Hubbard. Thirty-eight to forty years of age. Smooth-shaven. A star journalist with a national reputation; a large, heavy-set man, with large head, large hands – everything about him is large. A man radiating prosperity, optimism and selfishness. Has no morality whatever. Is a conscious individualist, cold-blooded, pitiless, working only for himself, and believing in nothing but himself.

Anthony Starkweather. An elderly, well preserved gentleman, slenderly built, showing all the signs of a man who has lived clean and has been almost an ascetic. One to whom the joys of the flesh have had little meaning. A cold, controlled man whose one passion is for power. Distinctively a man of power. An eagle-like man, who, by keenness of brain and force of character, has carved out a fortune of hundreds of millions. In short, an industrial and financial magnate of the first water and of the finest type to be found in the United States. Essentially a moral man, his rigid New England morality has suffered a sea change and developed into the morality of the master-man of affairs, equally rigid, equally uncompromising, but essentially Jesuitical in that he believes in doing wrong that right may come of it. He is absolutely certain that civilization and progress rest on his shoulders and upon the shoulders of the small group of men like him.

Mrs. Starkweather. Of the helpless, comfortably stout, elderly type. She has not followed her husband in his moral evolution. She is the creature of old customs, old prejudices, old New England ethics. She is rather confused by the modern rush of life.

Connie Starkweather. Margaret's younger sister, twenty years old. She is nothing that Margaret is, and everything that Margaret is not. No essential evil in her, but has no mind of her own – hopelessly a creature of convention. Gay, laughing, healthy, buxom – a natural product of her care-free environment.

Linda Davis. Maid to Margaret. A young woman of twenty-five or so, blond, Scandinavian, though American-born. A cold woman, almost featureless because of her long years of training, but with a hot heart deep down, and characterized by an intense devotion to her mistress. Wild horses could drag nothing from her where her mistress is concerned.

Junus Rutland. Having no strong features about him, the type realizes itself.

John Gifford. A labor agitator. A man of the people, rough-hewn, narrow as a labor-leader may well be, earnest and sincere. He is a proper, better type of labor-leader.

Matsu Sakari. Secretary of Japanese Embassy. He is the perfection of politeness and talks classical book-English. He bows a great deal.

Dolores Ortega. Wife of Peruvian Minister; bright and vivacious, and uses her hands a great deal as she talks, in the Latin-American fashion.