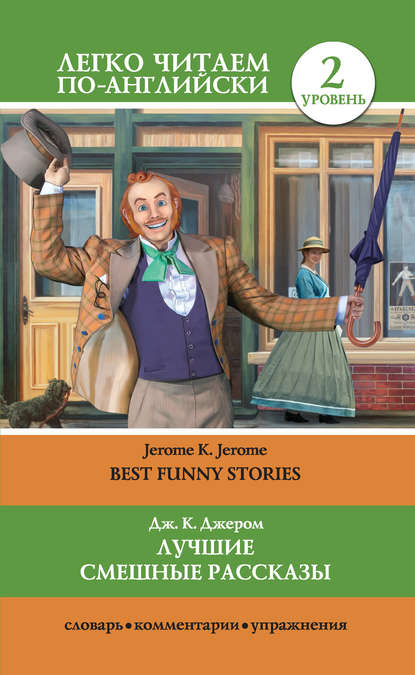 People know that we Englishmen attach too much importance to sport, it is well-known, indeed. One can wait: some day some English novelist[1 - some English novelist – некий английский романист] will write a book, showing the evil effects of over-indulgence in sport:[2 - over-indulgence in sport – чрезмерное увлечение спортом] the ruined business, the ruined home, the slow but sure[3 - slow but sure – медленный, но верный] destroying of the brain, which leads to foolishness.

I once heard of a young couple. They went for their honeymoon[4 - They went for their honeymoon – Они отправились на медовый месяц] to Scotland. The poor girl did not know he was a golfer (he won her heart when his shoulder was broken). They decided to make a tour. The second day the man went out for a walk. At dinner-time he noticed that it seemed a pretty place they had found, and suggested to stay there another day. The next morning after breakfast he borrowed a club from the hotel porter, and remarked that he would take a walk. He returned in time for lunch and seemed angry all the afternoon. He said the air was good for him, and urged that they should stay another day.

She was young and did not know much, and thought, maybe, he had a liver-ache. She had heard much about liver from her father. The next morning he borrowed more clubs, and went out, this time before breakfast, returning late and even more angry than before. That was the end of their honeymoon. He meant well,[5 - he meant well – у него были лучшие намерения] but the thing had gone too far.[6 - the thing had gone too far – дело зашло слишком далеко] The vice had entered into his blood.

Many people, I think, heard about the golfing priest, who was always swearing when he lost.

“You were right, Jamie,[8 - Jamie – Джейми]” cried the priest, “golf and the ministry are not friends, I have followed your advice: I have given it up.”

“Then what are you doing with that sack of clubs?” inquired Jamie.

“What am I doing with them?” repeated the puzzled Tammas. “I am going to play golf with them! Great Heavens,[9 - Great Heavens! – О Боже!] man!” he continued, “you don’t think it was the golf that I’d given up?”

The Englishman does not understand how to play. He makes a life-long labour of his sport, and to it sacrifices mind and body. The health resorts of Europe draw half their profits from the playing fields of Eton[10 - Eton – Итон] and everywhere. In Swiss and German resorts enormously fat men come to you and explain to you that once they were the champions or the best sportsmen of their university – men who now cannot go upstairs. Fat men, between paroxysms of coughing,[11 - between paroxysms of coughing – между приступами кашля] tell you of the goals they scored when they were extraordinary forwards. Unhappy sportsmen – you can meet them everywhere.

They are pitiable people. They can read only sport news, books are of no use to them. They never trained much their mind, and, apparently, have lost the ability to think. They don’t care for[12 - they don’t care for – они безразличны к] art, and Nature only suggests to them the things they can no longer do. The mountain reminds them that once they could sleigh; the field makes them sad because they can no longer handle a golf-club; by the riverside they sit down and tell you of the salmon they caught; birds only remind them about guns; music raises visions of the local cricket-match and the local band. We are sorry for them, but their stories are not interesting. The man who has other interests in life beyond sport is deaf to them; while they do not want to talk to one another. They do not believe one another.

The foreigner is taking our sports; we hope he will be warned by our example. Football is gaining favour more and more throughout Europe. But yet the Frenchman prefers to play with his head, not with his legs. He would rather catch the ball upon his head than score a goal. He does not seem to care what happens with the ball. Anybody can have the ball; he has had his game and is happy.

They talk of introducing cricket into Belgium;[13 - Belgium – Бельгия] I shall certainly try to be present at the opening game. I am afraid that the Belgian[14 - Belgian – бельгийский] player will stop cricket balls with his heads. That the head is the proper thing with which to play ball appears to be in his blood. My head is round, he thinks, and hard, just like the ball itself; what part of the human body is better to meet and stop a ball?

Tennis is firmly established from St. Petersburg[15 - St. Petersburg – Санкт-Петербург] to Bordeaux.[16 - Bordeaux – Бордо] University professors, rising early in the morning, hire boys and practise it. But to the Frenchman, as yet, it is a game. He plays it in a happy, merry fashion, that is shocking to English eyes.

Your partner’s game astonishes you. His ball runs outside the field constantly. The joyous laughter of the spectators explain everything. Your partner was trying to hit a man in the next court who was busy with his shoe-lace. With his last ball he has succeeded. He has hit the man in the small of the back,[17 - the small of the back – поясница] and has bowled him over.[18 - bowled him over – сбил его с ног] Doherty[19 - Doherty – Догерти] himself has never won greater applause from the crowd. Even the man who has been hit is pleased.

But the Frenchman forgets his shoe, he forgets his game. He gathers together all the balls that he can find; his balls, your balls, anybody’s balls. And then commences the return match. At this point it is better to quit. Most of the players follow this plan; they go to the club-house, and, finding themselves there, order coffee and light up cigarettes. After a while both players appear to be satisfied.

In about half-an-hour or so, when everybody is tired completely, the game – the original game – is resumed. You demand the score; your partner promptly says it is “forty-fifteen.” Both your opponents rush up to the net, and apparently there is going to be a duel. After a while they suggest a compromise. The discussion is concluded by calling it deuce.[20 - by calling it deuce – объявлением ничьи] As it is rare for a game to proceed without some such incident occurring in the middle of it, the score generally is deuce. Nobody wins and nobody loses.

To the earnest player,[21 - the earnest player – серьёзный игрок] it is also confusing to miss your partner occasionally – to turn round and find that he is talking to a man. Five minutes later he resumes the game. His friend comes with him, also the dog of his friend. The dog is welcomed with enthusiasm; all balls are returned to the dog. Until the dog is tired you cannot play.

But all this will no doubt soon be changed. There are some excellent French and Belgian players. The Frenchman is young in the game. He will also learn to keep the balls lower.

I suppose it is the continental sky.[22 - it is the continental sky – причина в континентальном небе] It is so blue, so beautiful; it naturally attracts one. So most tennis players on the Continent, whether English or foreign, try to aim the ball direct at Heaven. At an English club in Switzerland there was in my days a young Englishman who was really a wonderful player. He never passed the ball. But he was weak returning it. The ball went a hundred feet or so into the air and descended in his opponent’s court. The other man was standing and watching the ball, a little point in the Heavens, growing gradually bigger and bigger as it neared the earth. The ball fall at his feet, rise another twenty yards or so and again descend. When it was at the proper height he hit it back over the net, and the next moment it was mounting the sky again. I have seen that young man, with tears in his eyes, was pleading to be given an umpire. Every umpire had fled. They hid behind trees, pretended they were visitors, they wanted to avoid the task of umpiring for that young man. Such a game might last all day. Anyone could return his balls; but, as I have said, nobody could get a ball past him. He won; the other man, after an hour or so, was getting mad and trying to lose. It was his only chance of dinner.

Generally speaking, a tennis ground abroad is a pretty sight. The women pay more attention to their costumes than do our lady players. The men are usually in white. The ground is often in a wonderful place, the club-house is picturesque; there is always laughter and joy. The play may not be so good to watch, but the picture is delightful. I accompanied a man a little while ago to his club on the outskirts of Brussels.[23 - on the outskirts of Brussels – в предместье Брюсселя] The ground was bordered by a wood.

It was a glorious spring afternoon. The courts were crowded. The red earth and the green grass formed a background against which the women, in their new Parisian toilets,[24 - Parisian toilets – парижские туалеты] under their bright parasols, stood out like moving flowers. The whole atmosphere was delightful.

Just nearby a group of peasants were working in the field. An old woman and a young girl, with ropes about their shoulders, were drawing a harrow,[25 - were drawing a harrow – тащили за собой борону] an old man was guiding them. They paused for a moment at the wire fencing, and looked through. It was an odd contrast; the two worlds divided by the wire fencing – so slight, almost invisible. The girl swept the sweat from her face with her hand; the woman pushed back her grey locks underneath the handkerchief about her head; the old man stood himself with some difficulty. So they stood for a minute, gazing with quiet faces through that slight fencing.

Was there any thought, I wonder, passing through their brains? The young girl – she was very nice in spite of her ugly garments. The woman – she had a wonderfully fine face: clear, calm eyes under a square broad brow.

The old man bent again over the guiding ropes. They moved forward up the hill. It is Anatole France,[26 - Anatole France – Анатоль Франс, французский писатель и литературный критик (1844–1924).] I think, who says: Society is based[27 - is based – зиждется] upon the patience of the poor.

1. Baseball is gaining favour more and more throughout Europe.

2. Hockey is gaining favour more and more throughout Europe.

3. Football is gaining favour more and more throughout Europe.

4. Basketball is gaining favour more and more throughout Europe.

Football is gaining favour more and more throughout Europe.

2. Who won greater applause from the crowd?

3. Who does not understand how to play?