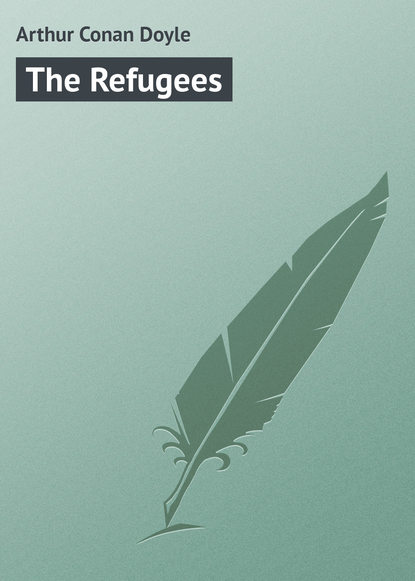 The Refugees is a historical novel, centring on the fate of the Huguenots during the reign of Louis XIV and the revoking of the Edict of Nantes.

Part I. In the old world

Chapter I. The man from America

It was the sort of window which was common in Paris about the end of the seventeenth century. It was high, mullioned, with a broad transom across the centre, and above the middle of the transom a tiny coat of arms – three caltrops gules upon a field argent – let into the diamond-paned glass. Outside there projected a stout iron rod, from which hung a gilded miniature of a bale of wool which swung and squeaked with every puff of wind. Beyond that again were the houses of the other side, high, narrow, and prim, slashed with diagonal wood-work in front, and topped with a bristle of sharp gables and corner turrets. Between were the cobble-stones of the Rue St. Martin and the clatter of innumerable feet.

Inside, the window was furnished with a broad bancal of brown stamped Spanish leather, where the family might recline and have an eye from behind the curtains on all that was going forward in the busy world beneath them. Two of them sat there now, a man and a woman, but their backs were turned to the spectacle, and their faces to the large and richly furnished room. From time to time they stole a glance at each other, and their eyes told that they needed no other sight to make them happy.

Nor was it to be wondered at, for they were a well-favoured pair. She was very young, twenty at the most, with a face which was pale, indeed, and yet of a brilliant pallor, which was so clear and fresh, and carried with it such a suggestion of purity and innocence, that one would not wish its maiden grace to be marred by an intrusion of colour. Her features were delicate and sweet, and her blue-black hair and long dark eyelashes formed a piquant contrast to her dreamy gray eyes and her ivory skin. In her whole expression there was something quiet and subdued, which was accentuated by her simple dress of black taffeta, and by the little jet brooch and bracelet which were her sole ornaments. Such was Adele Catinat, the only daughter of the famous Huguenot cloth-merchant.

But if her dress was sombre, it was atoned for by the magnificence of her companion. He was a man who might have been ten years her senior, with a keen soldier face, small well-marked features, a carefully trimmed black moustache, and a dark hazel eye which might harden to command a man, or soften to supplicate a woman, and be successful at either. His coat was of sky-blue, slashed across with silver braidings, and with broad silver shoulder-straps on either side. A vest of white calamanca peeped out from beneath it, and knee-breeches of the same disappeared into high polished boots with gilt spurs upon the heels. A silver-hilted rapier and a plumed cap lying upon a settle beside him completed a costume which was a badge of honour to the wearer, for any Frenchman would have recognised it as being that of an officer in the famous Blue Guard of Louis the Fourteenth. A trim, dashing soldier he looked, with his curling black hair and well-poised head. Such he had proved himself before now in the field, too, until the name of Amory de Catinat had become conspicuous among the thousands of the valiant lesser noblesse who had flocked into the service of the king.

They were first cousins, these two, and there was just sufficient resemblance in the clear-cut features to recall the relationship. De Catinat was sprung from a noble Huguenot family, but having lost his parents early he had joined the army, and had worked his way without influence and against all odds to his present position. His father's younger brother, however, finding every path to fortune barred to him through the persecution to which men of his faith were already subjected, had dropped the "de" which implied his noble descent, and he had taken to trade in the city of Paris, with such success that he was now one of the richest and most prominent citizens of the town. It was under his roof that the guardsman now sat, and it was his only daughter whose white hand he held in his own.

"I am not troubled, Amory,"

"Come, there is just one little line between those curving brows. Ah, I can read you, you see, as a shepherd reads the sky."

"You leave me this evening."

"But only to return to-morrow."

"And must you really, really go to-night?"

"It would be as much as my commission is worth to be absent. Why, I am on duty to-morrow morning outside the king's bedroom! After chapel-time Major de Brissac will take my place, and then I am free once more."

"Ah, Amory, when you talk of the king and the court and the grand ladies, you fill me with wonder."

"And why with wonder?"

"To think that you who live amid such splendour should stoop to the humble room of a mercer."

"Ah, but what does the room contain?"

"There is the greatest wonder of all. That you who pass your days amid such people, so beautiful, so witty, should think me worthy of your love, me, who am such a quiet little mouse, all alone in this great house, so shy and so backward! It is wonderful!"

"Every man has his own taste," said her cousin, stroking the tiny hand. "It is with women as with flowers. Some may prefer the great brilliant sunflower, or the rose, which is so bright and large that it must ever catch the eye. But give me the little violet which hides among the mosses, and yet is so sweet to look upon, and sheds its fragrance round it. But still that line upon your brow, dearest."

"I was wishing that father would return."

Her pale face lit up with a quick smile. "I shall not be lonely until to-night. But I am always uneasy when he is away. One hears so much now of the persecution of our poor brethren."

"Tut! my uncle can defy them."

"He has gone to the provost of the Mercer Guild about this notice of the quartering of the dragoons."

"Here it is." She rose and took up a slip of blue paper with a red seal dangling from it which lay upon the table. His strong, black brows knitted together as he glanced at it.

"Take notice," it ran, "that you, Theophile Catinat, cloth-mercer of the Rue St. Martin, are hereby required to give shelter and rations to twenty men of the Languedoc Blue Dragoons under Captain Dalbert, until such time as you receive a further notice. [Signed] De Beaupre (Commissioner of the King)."

De Catinat knew well how this method of annoying Huguenots had been practised all over France, but he had flattered himself that his own position at court would have insured his kinsman from such an outrage. He threw the paper down with an exclamation of anger.

"When do they come?"

"Then they shall not be here long. To-morrow I shall have an order to remove them. But the sun has sunk behind St. Martin's Church, and I should already be upon my way."

"I would that I could give you into your father's charge first, for I fear to leave you alone when these troopers may come. And yet no excuse will avail me if I am not at Versailles. But see, a horseman has stopped before the door. He is not in uniform. Perhaps he is a messenger from your father."

The girl ran eagerly to the window, and peered out, with her hand resting upon her cousin's silver-corded shoulder.

"Ah!" she cried, "I had forgotten. It is the man from America. Father said that he would come to-day."

"The man from America!" repeated the soldier, in a tone of surprise, and they both craned their necks from the window. The horseman, a sturdy, broad-shouldered young man, clean-shaven and crop-haired, turned his long, swarthy face and his bold features in their direction as he ran his eyes over the front of the house. He had a soft-brimmed gray hat of a shape which was strange to Parisian eyes, but his sombre clothes and high boots were such as any citizen might have worn. Yet his general appearance was so unusual that a group of townsfolk had already assembled round him, staring with open mouth at his horse and himself. A battered gun with an extremely long barrel was fastened by the stock to his stirrup, while the muzzle stuck up into the air behind him. At each holster was a large dangling black bag, and a gaily coloured red-slashed blanket was rolled up at the back of his saddle. His horse, a strong-limbed dapple-gray, all shiny with sweat above, and all caked with mud beneath, bent its fore knees as it stood, as though it were overspent. The rider, however, having satisfied himself as to the house, sprang lightly out of his saddle, and disengaging his gun, his blanket, and his bags, pushed his way unconcernedly through the gaping crowd and knocked loudly at the door.

"Who is he, then?" asked De Catinat. "A Canadian? I am almost one myself. I had as many friends on one side of the sea as on the other. Perchance I know him. There are not so many white faces yonder, and in two years there was scarce one from the Saguenay to Nipissing that I had not seen."

"Nay, he is from the English provinces, Amory. But he speaks our tongue. His mother was of our blood."

"Is Amos – Amos – ah, those names! Yes, Green, that was it – Amos Green. His father and mine have done much trade together, and now his son, who, as I understand, has lived ever in the woods, is sent here to see something of men and cities. Ah, my God! what can have happened now?"

A sudden chorus of screams and cries had broken out from the passage beneath, with the shouting of a man and the sound of rushing steps. In an instant De Catinat was half-way down the stairs, and was staring in amazement at the scene in the hall beneath.

Two maids stood, screaming at the pitch of their lungs, at either side. In the centre the aged man-servant Pierre, a stern old Calvinist, whose dignity had never before been shaken, was spinning round, waving his arms, and roaring so that he might have been heard at the Louvre. Attached to the gray worsted stocking which covered his fleshless calf was a fluffy black hairy ball, with one little red eye glancing up, and the gleam of two white teeth where it held its grip. At the shrieks, the young stranger, who had gone out to his horse, came rushing back, and plucking the creature off, he slapped it twice across the snout, and plunged it head-foremost back into the leather bag from which it had emerged.

"It is nothing," said he, speaking in excellent French; "it is only a bear."