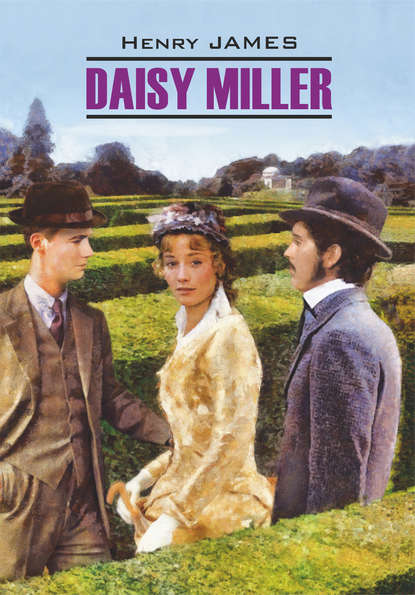 At the little town of Vevey, in Switzerland, there is a particularly comfortable hotel. There are, indeed, many hotels; for the entertainment of tourists is the business of the place, which, as many travellers will remember, is seated upon the edge of a remarkably blue lake – a lake that it behoves every tourist to visit. The shore of the lake presents an unbroken array of establishments of this order, of every category, from the “grand hotel” of the newest fashion, with a chalk-white front, a hundred balconies, and a dozen flags flying from its roof, to the little Swiss pension of an elder day, with its name inscribed in German-looking lettering upon a pink or yellow wall, and an awkward summerhouse in the angle of the garden. One of the hotels at Vevey, however, is famous, even classical, being distinguished from many of its upstart neighbours by an air both of luxury and of maturity. In this region, in the month of June, American travellers are extremely numerous; it may be said, indeed, that Vevey assumes at this period some of the characteristics of an American watering-place. There are sights and sounds which evoke a vision, an echo, of Newport and Saratoga. There is a flitting hither and thither[1 - hither and thither – (разг.) туда-сюда] of “stylish” young girls, a rustling of muslin flounces, a rattle of dance-music in the morning hours, a sound of high-pitched voices at all times. You receive an impression of these things at the excellent inn of the “Trois Couronnes,” and are transported in fancy[2 - are transported in fancy – (разг.) мысленно переноситесь] to the Ocean House or to Congress Hall. But at the “Trois Couronnes,” it must be added, there are other features that are much at variance with these suggestions: neat German waiters, who look like secretaries of legation; Russian princesses sitting in the garden; little Polish boys walking about, held by the hand, with their governors; a view of the snowy crest of the Dent du Midi and the picturesque towers of the Castle of Chillon.

I hardly know whether it was the analogies or the differences that were uppermost in the mind of a young American, who, two or three years ago, sat in the garden of the “Trois Couronnes,” looking about him, rather idly, at some of the graceful objects I have mentioned. It was a beautiful summer morning, and in whatever fashion the young American looked at things, they must have seemed to him charming. He had come from Geneva the day before, by the little steamer, to see his aunt, who was staying at the hotel – Geneva having been for a long time his place of residence. But his aunt had a headache – his aunt had almost always a headache – and now she was shut up in her room, smelling camphor, so that he was at liberty to wander about. He was some seven-and-twenty years of age; when his friends spoke of him, they usually said that he was at Geneva, “studying.” When his enemies spoke of him they said – but, after all, he had no enemies; he was an extremely amiable fellow, and universally liked. What I should say is, simply, that when certain persons spoke of him they affirmed that the reason of his spending so much time at Geneva was that he was extremely devoted to a lady who lived there – a foreign lady – a person older than himself. Very few Americans – indeed I think none – had ever seen this lady, about whom there were some singular stories. But Winterbourne had an old attachment for the little metropolis of Calvinism; he had been put to school there as a boy, and he had afterwards gone to college there – circumstances which had led to his forming a great many youthful friendships. Many of these he had kept, and they were a source of great satisfaction to him.

After knocking at his aunt’s door and learning that she was indisposed, he had taken a walk about the town, and then he had come in to his breakfast. He had now finished his breakfast; but he was drinking a small cup of coffee, which had been served to him on a little table in the garden by one of the waiters who looked like an attaché. At last he finished his coffee and lit a cigarette. Presently a small boy came walking along the path – an urchin of nine or ten. The child, who was diminutive for his years, had an aged expression of countenance, a pale complexion, and sharp little features. He was dressed in knickerbockers, with red stockings, which displayed his poor little spindleshanks; he also wore a brilliant red cravat. He carried in his hand a long alpenstock, the sharp point of which he thrust into everything that he approached – the flower-beds, the garden-benches, the trains of the ladies’ dresses. In front of Winterbourne he paused, looking at him with a pair of bright, penetrating little eyes.

“Will you give me a lump of sugar?” he asked, in a sharp, hard little voice – a voice immature, and yet, somehow, not young.

Winterbourne glanced at the small table near him, on which his coffee-service rested, and saw that several morsels of sugar remained. “Yes, you may take one,” he answered; “but I don’t think sugar is good for little boys.”

This little boy stepped forward and carefully selected three of the coveted fragments, two of which he buried in the pocket of his knickerbockers, depositing the other as promptly in another place. He poked his alpenstock, lance-fashion, into Winterbourne’s bench, and tried to crack the lump of sugar with his teeth.

“Oh, blazes; it’s har-r-d!” he exclaimed, pronouncing the adjective in a peculiar manner.

Winterbourne had immediately perceived that he might have the honour of claiming him as a fellow-countryman. “Take care you don’t hurt your teeth,” he said, paternally.

“I haven’t got any teeth to hurt. They have all come out. I have only got seven teeth. My mother counted them last night, and one came out right afterwards. She said she’d slap me if any more came out. I can’t help it. It’s this old Europe. It’s the climate that makes them come out. In America they didn’t come out. It’s these hotels.”

Winterbourne was much amused. “If you eat three lumps of sugar, your mother will certainly slap you,” he said.

“She’s got to give me some candy, then,” rejoined his young interlocutor. “I can’t get any candy here – any American candy. American candy’s the best candy.”

“I see you are one of the best!” laughed Winterbourne.

“Are you an American man?” pursued this vivacious infant. And then, on Winterbourne’s affirmative reply – “American men are the best,” he declared.

His companion thanked him for the compliment; and the child, who had now got astride of his alpenstock, stood looking about him, while he attacked a second lump of sugar. Winterbourne wondered if he himself had been like this in his infancy, for he had been brought to Europe at about this age.

“Here comes my sister!” cried the child, in a moment. “She’s an American girl.”

Winterbourne looked along the path and saw a beautiful young lady advancing. “American girls are the best girls,” he said, cheerfully, to his young companion.

“I imagine that is your fault, not hers,” said Winterbourne. The young lady meanwhile had drawn near. She was dressed in white muslin, with a hundred frills and flounces, and knots of pale-coloured ribbon. She was bare-headed; but she balanced in her hand a large parasol, with a deep border of embroidery; and she was strikingly, admirably pretty. “How pretty they are!” thought Winterbourne, straightening himself in his seat, as if he were prepared to rise.

The young lady paused in front of his bench, near the parapet of the garden, which overlooked the lake. The little boy had now converted his alpenstock into a vaulting-pole, by the aid of which he was springing about in the gravel, and kicking it up not a little.

“Randolph,” said the young lady, “what are you doing?”

“I’m going up the Alps,” replied Randolph. “This is the way!” And he gave another little jump, scattering the pebbles about Winterbourne’s ears.

“That’s the way they come down,” said Winterbourne.

The young lady gave no heed to this announcement, but looked straight at her brother. “Well, I guess you had better be quiet,” she simply observed.

It seemed to Winterbourne that he had been in a manner presented. He got up and stepped slowly towards the young girl, throwing away his cigarette. “This little boy and I have made acquaintance,” he said, with great civility. In Geneva, as he had been perfectly aware, a young man was not at liberty to speak to a young unmarried lady except under certain rarely-occurring conditions; but here at Vevey, what conditions could be better than these? – a pretty American girl coming and standing in front of you in a garden. This pretty American girl, however, on hearing Winterbourne’s observation, simply glanced at him; she then turned her head and looked over the parapet, at the lake and the opposite mountains. He wondered whether he had gone too far; but he decided that he must advance farther, rather than retreat. While he was thinking of something else to say, the young lady turned to the little boy again.

“I should like to know where you got that pole,” she said.

“I bought it!” responded Randolph.

“You don’t mean to say you’re going to take it to Italy.”

“Yes, I am going to take it to Italy!” the child declared.

The young girl glanced over the front of her dress, and smoothed out a knot or two of ribbon. Then she rested her eyes upon the prospect again. “Well, I guess you had better leave it somewhere,” she said, after a moment.

“Are you going to Italy?” Winterbourne inquired, in a tone of great respect.

The young lady glanced at him again. “Yes, sir,” she replied. And she said nothing more.

“Are you – a – going over the Simplon?” Winterbourne pursued, a little embarrassed.

“I don’t know,” she said. “I suppose it’s some mountain. Randolph, what mountain are we going over?”

“Going where?” the child demanded.

“Oh, Italy is a beautiful place!” rejoined the young man.