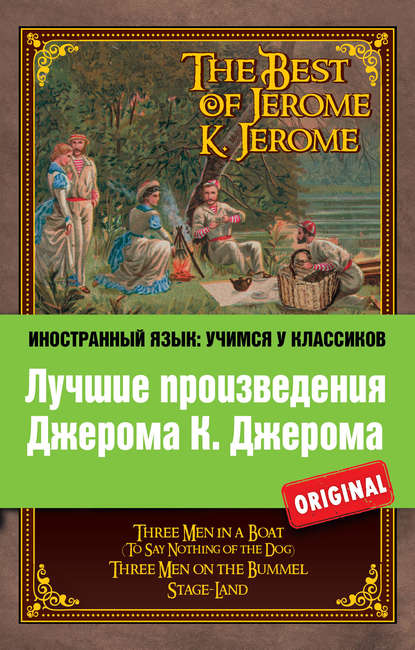 Three men in a boat (to Say Nothing of the Dog)

the chief beauty of this book lies not so much in its literary style, or in the extent and usefulness of the information it conveys, as in its simple truthfulness. Its pages form the record of events that really happened. All that has been done is to colour them; and, for this, no extra charge has been made. George and Harris and Montmorency are not poetic ideals, but things of flesh and blood – especially George, who weighs about twelve stone[1 - stone = 14 pounds = 6,35 kg]. Other works may excel this in dept of thought and knowledge of human nature: other books may rival it in originality and size; but, for hopeless and incurable veracity, nothing yet discovered can surpass it. This, more than all its other charms, will, it is felt, make the volume precious in the eye of the earnest reader; and will lend additional weight to the lesson that the story teaches.

three invalids. – Sufferings of George and Harris. – A victim to one hundred and seven fatal maladies. – Useful prescriptions. – Cure for liver complaint in children. – We agree that we are overworked, and need rest. – A week on the rolling deep? – George suggests the River. – Montmorency lodges an objection. – Original motion carried by majority of three to one.

There were four of us – George, and William Samuel Harris, and myself, and Montmorency. We were sitting in my room, smoking, and talking about how bad we were – bad from a medical point of view I mean, of course.

It is a most extraordinary thing, but I never read a patent medicine advertisement without being impelled to the conclusion that I am suffering from the particular disease therein dealt with in its most virulent form. The diagnosis seems in every case to correspond exactly with all the sensations that I have ever felt.

I remember going to the British Museum one day to read up the treatment for some slight ailment of which I had a touch – hay fever, I fancy it was. I got down the book, and read all I came to read; and then, in an unthinking moment, I idly turned the leaves, and began to indolently study diseases, generally. I forget which was the first distemper I plunged into – some fearful, devastating scourge, I know – and, before I had glanced half down the list of “premonitory symptoms,” it was borne in upon me that I had fairly got it.

I sat for awhile, frozen with horror; and then, in the listlessness of despair, I again turned over the pages. I came to typhoid fever – read the symptoms – discovered that I had typhoid fever, must have had it for months without knowing it – wondered what else I had got; turned up St. Vitus’s Dance[2 - St. Vitus’s Dance – a nervous disorder characterized by uncoordinated shaking movements] – found, as I expected, that I had that too, – began to get interested in my case, and determined to sift it to the bottom, and so started alphabetically – read up ague, and learnt that I was sickening for it, and that the acute stage would commence in about another fortnight. Bright’s disease[3 - Bright’s disease – kidney diseases (acute or chronic nephritis)], I was relieved to find, I had only in a modified form, and, so far as that was concerned, I might live for years. Cholera I had, with severe complications; and diphtheria I seemed to have been born with. I plodded conscientiously through the twenty-six letters, and the only malady I could conclude I had not got was housemaid’s knee[4 - housemaid’s knee – Bursitis, swelling and inflammation over the front of the knee. Commonly seen in patients who kneel for extended periods].

I felt rather hurt about this at first; it seemed somehow to be a sort of slight. Why hadn’t I got housemaid’s knee? Why this invidious reservation? After a while, however, less grasping feelings prevailed. I reflected that I had every other known malady in the pharmacology, and I grew less selfish, and determined to do without housemaid’s knee. Gout, in its most malignant stage, it would appear, had seized me without my being aware of it; and zymosis I had evidently been suffering with from boyhood. There were no more diseases after zymosis, so I concluded there was nothing else the matter with me.

I sat and pondered. I thought what an interesting case I must be from a medical point of view, what an acquisition I should be to a class! Students would have no need to “walk the hospitals,” if they had me. I was a hospital in myself. All they need do would be to walk round me, and, after that, take their diploma.

Then I wondered how long I had to live. I tried to examine myself. I felt my pulse. I could not at first feel any pulse at all. Then, all of a sudden, it seemed to start off. I pulled out my watch and timed it. I made it a hundred and forty-seven to the minute. I tried to feel my heart. I could not feel my heart. It had stopped beating. I have since been induced to come to the opinion that it must have been there all the time, and must have been beating, but I cannot account for it. I patted myself all over my front, from what I call my waist up to my head, and I went a bit round each side, and a little way up the back. But I could not feel or hear anything. I tried to look at my tongue. I stuck it out as far as ever it would go, and I shut one eye, and tried to examine it with the other. I could only see the tip, and the only thing that I could gain from that was to feel more certain than before that I had scarlet fever.

I had walked into that reading-room a happy, healthy man. I crawled out a decrepit wreck.

I went to my medical man. He is an old chum of mine, and feels my pulse, and looks at my tongue, and talks about the weather, all for nothing, when I fancy I’m ill; so I thought I would do him a good turn by going to him now. “What a doctor wants,” I said, “is practice. He shall have me. He will get more practice out of me than out of seventeen hundred of your ordinary, commonplace patients, with only one or two diseases each.” So I went straight up and saw him, and he said:

“Well, what’s the matter with you?”

And I told him how I came to discover it all.

Then he opened me and looked down me, and clutched hold of my wrist, and then he hit me over the chest when I wasn’t expecting it – a cowardly thing to do, I call it – and immediately afterwards butted me with the side of his head. After that, he sat down and wrote out a prescription, and folded it up and gave it me, and I put it in my pocket and went out.

I did not open it. I took it to the nearest chemist’s, and handed it in. The man read it, and then handed it back.

He said he didn’t keep it.

“You are a chemist?”

“I am a chemist. If I was a co-operative stores and family hotel combined, I might be able to oblige you. Being only a chemist hampers me.”

I read the prescription. It ran:

And don’t stuff up your head with things you don’t understand.”

I followed the directions, with the happy result – speaking for myself – that my life was preserved, and is still going on.

In the present instance, going back to the liver-pill circular, I had the symptoms, beyond all mistake, the chief among them being “a general disinclination to work of any kind.”

What I suffer in that way no tongue can tell. From my earliest infancy I have been a martyr to it. As a boy, the disease hardly ever left me for a day. They did not know, then, that it was my liver. Medical science was in a far less advanced state than now, and they used to put it down to laziness.

“Why, you skulking little devil, you,” they would say, “get up and do something for your living, can’t you?” – not knowing, of course, that I was ill.

And they didn’t give me pills; they gave me clumps on the side of the head. And, strange as it may appear, those clumps on the head often cured me – for the time being. I have known one clump on the head have more effect upon my liver, and make me feel more anxious to go straight away then and there, and do what was wanted to be done, without further loss of time, than a whole box of pills does now.

You know, it often is so – those simple, old-fashioned remedies are sometimes more efficacious than all the dispensary stuff.

George fancies he is ill; but there’s never anything really the matter with him, you know.

At this point, Mrs. Poppets knocked at the door to know if we were ready for supper. We smiled sadly at one another, and said we supposed we had better try to swallow a bit. Harris said a little something in one’s stomach often kept the disease in check; and Mrs. Poppets brought the tray in, and we drew up to the table, and toyed with a little steak and onions, and some rhubarb tart.

I must have been very weak at the time; because I know, after the first half-hour or so, I seemed to take no interest whatever in my food – an unusual thing for me – and I didn’t want any cheese.

This duty done, we refilled our glasses, lit our pipes, and resumed the discussion upon our state of health. What it was that was actually the matter with us, we none of us could be sure of; but the unanimous opinion was that it – whatever it was – had been brought on by overwork.