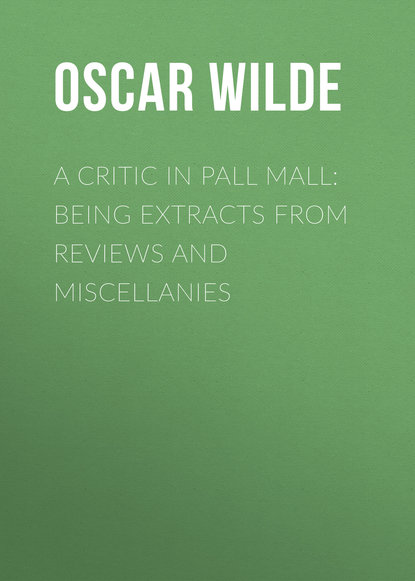 Оскар Уайльд
A Critic in Pall Mall: Being Extracts from Reviews and Miscellanies

She thought Flaubert too much preoccupied with the sense of form, and makes these excellent observations to him – perhaps her best piece of literary criticism. ‘You consider the form as the aim, whereas it is but the effect. Happy expressions are only the outcome of emotion and emotion itself proceeds from a conviction. We are only moved by that which we ardently believe in.’ Literary schools she distrusted. Individualism was to her the keystone of art as well as of life. ‘Do not belong to any school: do not imitate any model,’ is her advice. Yet she never encouraged eccentricity. ‘Be correct,’ she writes to Eugène Pelletan, ‘that is rarer than being eccentric, as the time goes. It is much more common to please by bad taste than to receive the cross of honour.’

On the whole, her literary advice is sound and healthy. She never shrieks and she never sneers. She is the incarnation of good sense. And the whole collection of her letters is a perfect treasure-house of suggestions both on art and on politics.

A philosophic politician once remarked that the best possible form of government is an absolute monarchy tempered by street ballads.

Without at all agreeing with this aphorism we still cannot but regret that the new democracy does not use poetry as a means for the expression of political opinion. The Socialists, it is true, have been heard singing the later poems of Mr. William Morris, but the street ballad is really dead in England. The fact is that most modern poetry is so artificial in its form, so individual in its essence and so literary in its style, that the people as a body are little moved by it, and when they have grievances against the capitalist or the aristocrat they prefer strikes to sonnets and rioting to rondels.

Possibly, Mr. William Toynbee’s pleasant little volume of translations from Béranger may be the herald of a new school. Béranger had all the qualifications for a popular poet. He wrote to be sung more than to be read; he preferred the Pont Neuf to Parnassus; he was patriotic as well as romantic, and humorous as well as humane. Translations of poetry as a rule are merely misrepresentations, but the muse of Béranger is so simple and naïve that she can wear our English dress with ease and grace, and Mr. Toynbee has kept much of the mirth and music of the original. Here and there, undoubtedly, the translation could be improved upon; ‘rapiers’ for instance is an abominable rhyme to ‘forefathers’; ‘the hated arms of Albion’ in the same poem is a very feeble rendering of ‘le léopard de l’Anglais,’ and such a verse as

reproduces very inadequately the charm of the original:

On the whole, however, Mr. Toynbee’s work is good; Les Champs, for example, is very well translated, and so are the two delightful poems Rosette and Ma République; and there is a good deal of spirit in Le Marquis de Carabas:

Whom have we here in conqueror’s rôle?
Our grand old marquis, bless his soul!
Whose grand old charger (mark his bone!)
Has borne him back to claim his own.
Note, if you please, the grand old style
In which he nears his grand old pile;
With what an air of grand old state
He waves that blade immaculate!
Hats off, hats off, for my lord to pass,
The grand old Marquis of Carabas! —

though ‘that blade immaculate’ has hardly got the sting of ‘un sabre innocent’; and in the fourth verse of the same poem, ‘Marquise, you’ll have the bed-chamber’ does not very clearly convey the sense of the line ‘La Marquise a le tabouret.’ Béranger is not nearly well enough known in England, and though it is always better to read a poet in the original, still translations have their value as echoes have their music.

A Selection from the Songs of De Béranger in English Verse. By William Toynbee. (Kegan Paul.)

THE POETRY OF THE PEOPLE

The Countess Martinengo deserves well of all poets, peasants and publishers. Folk-lore is so often treated nowadays merely from the point of view of the comparative mythologist, that it is really delightful to come across a book that deals with the subject simply as literature. For the Folk-tale is the father of all fiction as the Folk-song is the mother of all poetry; and in the games, the tales and the ballads of primitive people it is easy to see the germs of such perfected forms of art as the drama, the novel and the epic. It is, of course, true that the highest expression of life is to be found not in the popular songs, however poetical, of any nation, but in the great masterpieces of self-conscious Art; yet it is pleasant sometimes to leave the summit of Parnassus to look at the wildflowers in the valley, and to turn from the lyre of Apollo to listen to the reed of Pan. We can still listen to it. To this day, the vineyard dressers of Calabria will mock the passer-by with satirical verses as they used to do in the old pagan days, and the peasants of the olive woods of Provence answer each other in amœbæan strains. The Sicilian shepherd has not yet thrown his pipe aside, and the children of modern Greece sing the swallow-song through the villages in spring-time, though Theognis is more than two thousand years dead. Nor is this popular poetry merely the rhythmic expression of joy and sorrow; it is in the highest degree imaginative; and taking its inspiration directly from nature it abounds in realistic metaphor and in picturesque and fantastic imagery. It must, of course, be admitted that there is a conventionality of nature as there is a conventionality of art, and that certain forms of utterance are apt to become stereotyped by too constant use; yet, on the whole, it is impossible not to recognize in the Folk-songs that the Countess Martinengo has brought together one strong dominant note of fervent and flawless sincerity. Indeed, it is only in the more terrible dramas of the Elizabethan age that we can find any parallel to the Corsican voceri with their shrill intensity of passion, their awful frenzies of grief and hate. And yet, ardent as the feeling is, the form is nearly always beautiful. Now and then, in the poems of the extreme South one meets with a curious crudity of realism, but, as a rule, the sense of beauty prevails.

Some of the Folk-poems in this book have all the lightness and loveliness of lyrics, all of them have that sweet simplicity of pure song by which mirth finds its own melody and mourning its own music, and even where there are conceits of thought and expression they are conceits born of fancy not of affectation. Herrick himself might have envied that wonderful love-song of Provence:

How charming also is this lullaby by which the Corsican mother sings her babe to sleep!

Gold and pearls my vessel lade,
Silk and cloth the cargo be,
All the sails are of brocade
Coming from beyond the sea;
And the helm of finest gold,
Made a wonder to behold.
Fast awhile in slumber lie;
Sleep, my child, and hushaby.

After you were born full soon,
You were christened all aright;
Godmother she was the moon,
Godfather the sun so bright.
All the stars in heaven told
Wore their necklaces of gold.
Fast awhile in slumber lie;
Sleep, my child, and hushaby.

Or this from Roumania:

Sleep, my daughter, sleep an hour;
Mother’s darling gilliflower.
Mother rocks thee, standing near,
She will wash thee in the clear
Waters that from fountains run,
To protect thee from the sun.