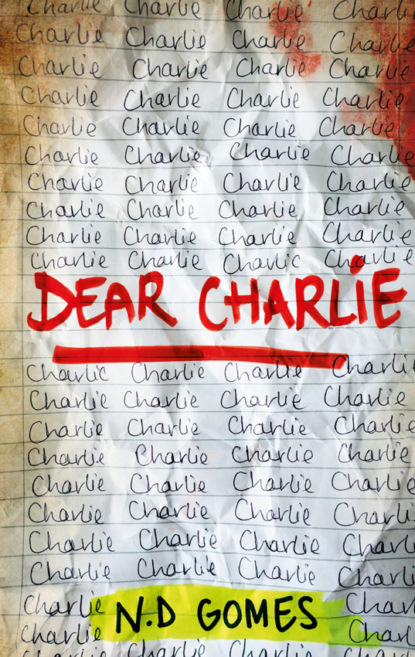 Death should never meet the young. But it did. Thanks to my brother, death made fourteen new friends that day. Maybe even fifteen, if you count Charlie.But I don’t think death came for him. I think something darker and more sinister took his soul.At sixteen, Sam Macmillan is supposed to be thinking about girls, homework and his upcoming application to music college, not picking up the pieces after the school shooting that his brother Charlie committed.Yet as Sam desperately tries to hang on to the memories he has of his brother, the media storm surrounding their family threatens to destroy everything. And Sam has to question all he thought he knew about life, death, right and wrong.

N.D. GOMES graduated from the University of Stirling with a BA in Media & Journalism Studies, and went on to receive her Master’s degree in Education in the US. She currently works in a public school system to increase educational opportunities for students with special needs. Previously, N.D. Gomes wrote for the London-based online student political magazine, deAlign and stage-managed student plays at the Lee Strasberg Theatre Institute in New York City where she attended for two years.

She currently divides her time between the US and Scotland, but hopes to spend more time at her cottage in Hay-on-Wye in Wales.

Dear Charlie is her debut novel.

To my family and Nick for their endless support

Chapter 21: ‘The End is the Beginning is the End’ (Smashing Pumpkins, Summer 1997) (#litres_trial_promo)

The strange thing is, I can’t stop thinking about the small things, like what I had for breakfast that morning, what music I listened to on the radio while I ate, why I chose blue jeans over black cords. But that’s just it. These thoughts fill my head all day, but when I open my mouth to share them, I can’t. I just can’t.

My therapist says if I can’t talk about it then maybe writing in a journal will help me. Like I’m the one who needs help in this family. Yes, I am seeing a therapist. That’s how bad things have got around here.

I don’t even know where to start. Everything’s changed. Mum flits between total denial and hysterics, almost on a daily basis. One minute she acts like she really believes you’re just upstairs doing your homework or listening to music, and the next minute it’s a complete emotional breakdown all over again. She relives your death every day. My therapist says this is normal, but I’m beginning to question whether there really is a criterion for measuring normality in this kind of a situation.

Dad remains a total enigma as usual, occasionally ranting and pointing fingers. But most of the time he doesn’t say anything, for days sometimes. I don’t know what is happening in his head, but then again we never did. We do seem to have one thing in common – we both haven’t cried, not one tear. I don’t see the point. Tears won’t reverse your actions, or bring you back. Tears won’t let me forget, even if that was possible.

You don’t have to look far for Dad now. He’s either sitting in front of the TV or has locked himself in the garage, but I don’t blame him. I don’t go outside much myself. We’re famous now, just like you always wanted. Our pictures are always in the newspapers, even our house. They keep using the same photo of you. It’s your yearbook picture from last year, the one where you let your hair grow out for it. Mum was so mad at you. She said you didn’t look like yourself, which is funny now because obviously we didn’t know you at all.

Your room is the same as you left it. Or at least, we think so. The police conducted a search of your bedroom not long after. Mum tried to put the pieces back together. She’s always trying. I wasn’t much help. I hadn’t been in your room in weeks, maybe even months. Either you stopped inviting me in, or I stopped asking to come in. Honestly, I don’t remember.

A pair of your shoes is still sitting by the door, next to mine. I see them every time I walk past the door, which I do more often now. I like to look out the window and see the photographers waiting for us beyond the garden. I hide behind the lace curtain, but they probably know I’m there. Occasionally I’ll see neighbours walk by, but they usually cross the street to avoid passing our house. Perhaps they think it’s a disease that they might catch – a contagious need for death and disorder. Maybe they think I have it too. Maybe I do.

I can’t fathom a bigger emotional mess for someone to have left behind. I wonder if you knew that this would happen. I wonder if you thought about anything at all before you walked into that assembly hall at 8.22am on the last day of school.

Pembrook Academy is still closed. I read in the newspaper on Tuesday that the assembly hall will be torn down and replaced with a memorial garden. The remainder of the school will re-open to students by Christmas. But I won’t be there to watch the thick yellow tape being cut by the new headteacher.

They hired a woman this time, and I bet she’s not as strict as Mr Healey. I still remember that time you pulled the fire alarms in the building and set off the sprinkler system. It went down as the best prank in history – in the 1994 yearbook anyway. You were suspended for five days around the time that I had the flu. I always thought that you did it only so you could spend those five days with me, playing Doom on Dad’s PC and prank-calling strangers from the phonebook – Mr Dungworth, Mrs Shufflebottom. My sides ache just thinking about that. I never laughed so hard. I never did thank you for that.