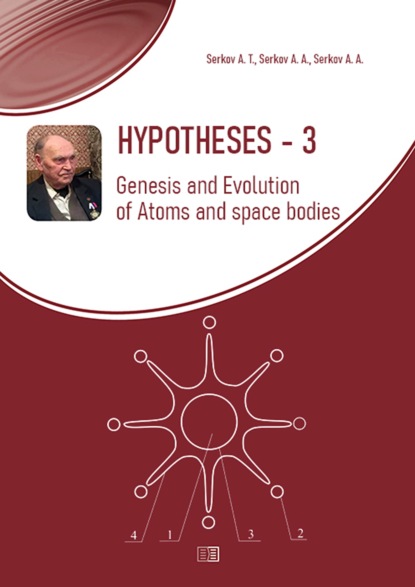 Hypotheses-3. Genesis and Evolution of Atoms and space bodies

Book “Hypotheses-3: Genesis and Evolution of Atoms and Cosmic Bodies”. is the final one in the series “Hypotheses. Serkov AT ". The first book in this series was published in 1998. This book examines the formation of chemical elements, their evolution and decay. The initial product is hydrogen (protons), which is formed by condensation of sub-elementary particles and during nuclear reactions by the mechanism of the formation of «secondary drops» when a «drop» of nuclear liquid hits the surface of the liquid nucleus of an atom (crown splash effect). An increase in the mass of atoms occurs as a result of the orbital capture of atoms of light elements, their subsequent deceleration and fall on the nucleus, as a result of which the frequency of rotation of nuclei increases, leading to periodic disruption of dynamic boundary layers and, accordingly, to a periodic change in the properties of chemical elements. An increase in the speed of rotation of stars with an increase in their mass indicates the occurrence of similar processes in space and the main sequence in the Hertzsprung-Russell diagram reflects the process of an increase in the mass of stars due to orbital captures of red and brown dwarfs. Periodic changes in the properties of exoplanetary systems are predicted depending on the mass of stars, in particular, their sizes.