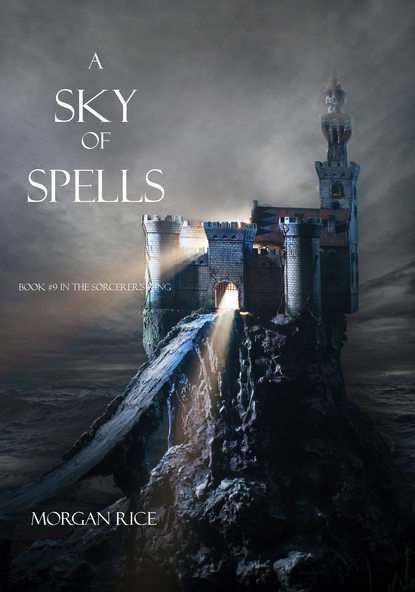 A Sky of Spells

In A SKY OF SPELLS (BOOK #9 IN THE SORCERER’S RING), Thorgrin finally returns to himself and must confront his father once and for all. An epic battle occurs, as two titans face each other, and as Rafi uses his power to summon an army of undead. With the Destiny Sword destroyed, and the fate of the Ring in the balance, Argon and Alistair will need to summon their magical powers to help Gwendolyn’s brave warriors. Yet even with their help, all could be lost if it were not for the return of Mycoples, and her new companion, Ralibar.
Luanda struggles to prevail against her captor, Romulus, as the fate of the Shield hangs in the balance. Reece, meanwhile, struggles to lead his men back up the Canyon walls, with Selese’s help. Their love deepens; but with the arrival of Reece’s old love, his cousin, a tragic love triangle and misunderstandings develop.
When the Empire is finally ousted from the Ring, and Gwendolyn has her chance for personal vengeance against McCloud, there is great cause to celebrate. As the new Queen of the Ring, Gwen uses her powers to unite both MacGils and McClouds for the first time in history, and to begin the epic rebuilding of the land, of her army, and of the Legion. King’s Court slowly comes back to life once again, as they all begin to pick up the pieces. It is destined to become a more glorious city than even her father ever dreamed of, and in the process, justice finally finds Gareth.
Tirus must be brought to justice, too, and Gwen will have to decide what sort of leader she will be. There is a great conflict amongst Tirus’ sons, not all of whom see things the same way, and a struggle for power erupts once again, as Gwen decides if she will accept an invitation to the Upper Isles, thus making the MacGil clan whole once again. Erec is summoned to return to his people in the Southern Isles and see his dying father, and Alistair joins him, as they prepare for their wedding. Thorgrin and Gwendolyn may have wedding preparations in their future, too.
Thor becomes closer to his sister, and as all settles down inside the Ring, he finds himself summoned to embark on his greatest quest of all: to seek out his mysterious mother in a faraway land and to find out who he really is. With multiple wedding preparations in the air, with Spring returning, King’s Court rebuilding, festivals afoot, peace seems to settle back onto the Ring. But danger lurks in the most unforeseen corners, and all of these characters greatest tribulations might be yet to come.
With its sophisticated world-building and characterization, A SKY OF SPELLS is an epic tale of friends and lovers, of rivals and suitors, of knights and dragons, of intrigues and political machinations, of coming of age, of broken hearts, of deception, ambition and betrayal. It is a tale of honor and courage, of fate and destiny, of sorcery. It is a fantasy that brings us into a world we will never forget, and which will appeal to all ages and genders.