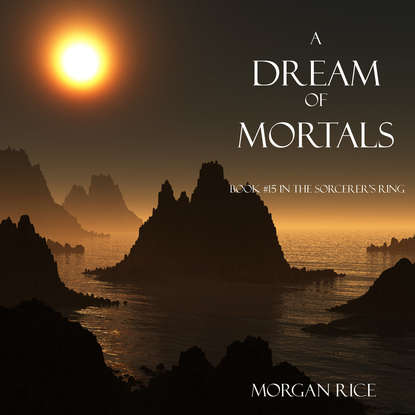 A Dream of Mortals

“THE SORCERER’S RING has all the ingredients for an instant success: plots, counterplots, mystery, valiant knights, and blossoming relationships replete with broken hearts, deception and betrayal. It will keep you entertained for hours, and will satisfy all ages. Recommended for the permanent library of all fantasy readers.”
—Books and Movie Reviews, Roberto Mattos (regarding A Quest of Heroes)

“[An] entertaining epic fantasy.”
—Kirkus Reviews (regarding A Quest of Heroes)

“The beginnings of something remarkable are there.”
—San Francisco Book Review (regarding A Quest of Heroes)

A DREAM OF MORTALS is Book #15 in the Bestselling series THE SORCERER'S RING, which begins with A QUEST OF HEROES (book #1)—a free download!


In A DREAM OF MORTALS, Thorgrin and his brothers struggle to break free from the grips of the pirates, and to continue their search for Guwayne at sea. As they encounter unexpected friends and foes, magic and weaponry, dragons and men, it will change the very course of their destiny. Will they finally find Guwayne?


Darius and his few friends survive the massacre of their people—but only to find that they are captives, thrown into the Empire Arena. Shackled together, facing unimaginable opponents, their only hope for survival is to stand and fight together, as brothers.


Gwendolyn wakes from her slumber to discover that she and the others have survived their trek across the Great Waste—and even more shocking, that they have come to a land beyond their wildest imagination. As they are brought into a new royal court, the secrets Gwendolyn learns about her ancestors and her own people will change her destiny forever.


Erec and Alistair, still captive at sea, struggle to break free from the grips of the Empire fleet in a bold and daring nighttime escape. When odds seem at their worst, they receive an unexpected surprise that might just give them a second chance for victory—and another chance to continue their attack on the heart of the Empire.


Godfrey and his crew, imprisoned once again, set to be executed, have one last chance to try to escape. After being betrayed, they want more than escape this time—they want vengeance.


Volusia is surrounded on all sides as she strives to take and hold the Empire capital—and she will have to summon a more powerful magic than she’s ever known if she is to prove herself a Goddess, and become Supreme Ruler of the Empire. Once again, the fate of the Empire hangs in the balance.


With its sophisticated world-building and characterization, A DREAM OF MORTALS is an epic tale of friends and lovers, of rivals and suitors, of knights and dragons, of intrigues and political machinations, of coming of age, of broken hearts, of deception, ambition and betrayal. It is a tale of honor and courage, of fate and destiny, of sorcery. It is a fantasy that brings us into a world we will never forget, and which will appeal to all ages and genders.


“A spirited fantasy ….Only the beginning of what promises to be an epic young adult series.”
—Midwest Book Review (regarding A Quest of Heroes)

“A quick and easy read…you have to read what happens next and you don’t want to put it down.”
—FantasyOnline.net (regarding A Quest of Heroes)

“Action-packed …. Rice's writing is solid and the premise intriguing.”
—Publishers Weekly (regarding A Quest of Heroes)