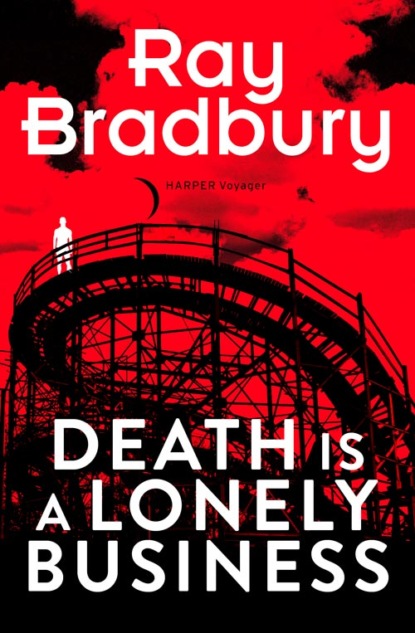 One of Ray Bradbury’s classic noir novels, available in ebook for the first time.Toiling away amid the looming palm trees and decaying bungalows, a struggling young writer (who bears a resemblance to the author) spins fantastic stories from his fertile imagination upon his clacking typewriter. Trying not to miss his girlfriend (away studying in Mexico), the nameless writer steadily crafts his literary effort – until strange things begin happening around him.Starting with a series of peculiar phone calls, the writer then finds clumps of seaweed on his doorstep. But as the incidents escalate, his friends fall victim to a series of mysterious ‘accidents’ – some of them fatal. Aided by Elmo Crumley, a savvy, street-smart detective, and a reclusive actress of yesteryear with an intense hunger for life, the wordsmith sets out to find the connection between the bizarre events, and in doing so, uncovers the truth about his own creative abilities.

Death is a Lonely Business

First published by Alfred A. Knopf 1985

All rights reserved under International and Pan-American Copyright Conventions. By payment of the required fees, you have been granted the nonexclusive, nontransferable right to access and read the text of this ebook on-screen. No part of this text may be reproduced, transmitted, downloaded, decompiled, reverse-engineered, or stored in or introduced into any information storage and retrieval system, in any form or by any means, whether electronic or mechanical, now known or hereinafter invented, without the express written permission of HarperCollins ebooks

who caused it to Happen.

And to the memory

And to my fiends and teachers

Venice, California, in the old days had much to recommend it to people who liked to be sad. It had fog almost every night and along the shore the moaning of the oil well machinery and the slap of dark water in the canals and the hiss of sand against the windows of your house when the wind came up and sang among the open places and along the empty walks.

Those were the days when the Venice pier was falling apart and dying in the sea and you could find there the bones of a vast dinosaur, the rollercoaster, being covered by the shifting tides.

At the end of one long canal you could find old circus wagons that had been rolled and dumped, and in the cages, at midnight, if you looked, things lived—fish and crayfish moving with the tide; and it was all the circuses of time somehow gone to doom and rusting away.

And there was a loud avalanche of big red trolley car that rushed toward the sea every half-hour and at midnight skirled the curve and threw sparks on the high wires and rolled away with a moan which was like the dead turning in their sleep, as if the trolleys and the lonely men who swayed steering them knew that in another year they would be gone, the tracks covered with concrete and tar and the high spider-wire collected on rolls and spirited away.

And it was in that time, in one of those lonely years when the fogs never ended and the winds never stopped their laments, that riding the old red trolley, the high-bucketing thunder, one night I met up with Death’s friend and didn’t know it.

It was a raining night, with me reading a book in the back of the old, whining, roaring railcar on its way from one empty confetti-tossed transfer station to the next. Just me and the Dig, aching wooden car and the conductor up front slamming the brass controls and easing the brakes and letting out the hell-steam when needed.

And the man down the aisle who somehow had got there without my noticing.

I became aware of him finally because of him swaying, swaying, standing there behind me for a long time, as if undecided because there were forty empty seats and late at night it is hard with so much emptiness to decide which one to take. But finally I heard him sit and I knew he was there because I could smell him like the tidelands coming in across the fields. On top of the smell of his clothes, there was the odor of too much drink taken in too little time.

I did not look back at him. I learned long ago, looking only encourages.

I shut my eyes and kept my head firmly turned away. It didn’t work.

I could feel him strain forward in his seat. I felt his hot breath on my neck. I held on to my knees and sank away.