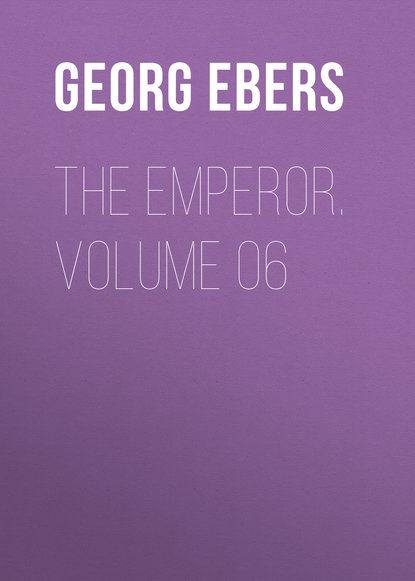 Dame Hannah had watched by Selene till sunrise and indefatigably cooled both her injured foot and the wound in her head. The old physician was not dissatisfied with the condition of his patient, but ordered the widow to lie down for a time and to leave the care of her for a few hours to her young friend. When Mary was alone with the sick girl and had laid the fresh cold handkerchief in its place, Selene turned her face towards her and said:

"Then you were at Lochias yesterday. Tell me how you found them all there. Who guided you to our lodgings and did you see my little brother and sisters?"

"You are not yet quite free of fever, and I do not know how much I ought to talk to you—but I would with all my heart."

The words were spoken kindly and there was a deep loving light in the eyes of the deformed girl as she said them. Selene excited not merely her sympathy and pity, but her admiration too, for she was so beautiful, so totally different from herself, and in every little service she rendered her, she felt like some despised beggar whom a prince might have permitted to wait upon him. Her hump had never seemed to her so bent, nor her brown skin so ugly at any other time as it did to-day, when side by side with this symmetrical and delicate girlish form, rounded to such tender contours.

But Mary felt not the smallest movement of envy. She only felt happy to help Selene, to serve her, to be allowed to gaze at her although she was a heathen. During the night too, she had prayed fervently that the Lord might graciously draw to himself this lovely, gentle creature, that He might permit her to recover, and fill her soul with the same love for the Saviour that gave joy to her own. More than once she had longed to kiss her, but she dared not, for it seemed to her as though the sick girl were made of finer stuff than she herself.

Selene felt tired, very tired, and as the pain diminished, a comfortable sense stole over her of peace and respite in the silent and loving homeliness of her surroundings; a feeling that was new and very soothing, though it was interrupted, now and again, by her anxiety for those at home. Dame Hannah's presence did her good, for she fancied she recognized in her voice something that had been peculiar to her mother's, when she had played with her and pressed her with special affection to her heart.

In the papyrus factory, at the gumming-table, the sight of the little hunchback had disgusted Selene, but here she observed what good eyes she had, and how kind a voice, and the care with which Mary lifted the compress from her foot—as softly, as if in her own hands she felt the pain that Selene was suffering—and then laid another on the broken ankle, aroused her gratitude. Her sister Arsinoe was a vain and thorough Alexandrian girl, and she had nicknamed the poor thing after the ugliest of the Hellenes who had besieged Troy. "Dame Thersites," and Selene herself had often repeated it. Now she forgot the insulting name altogether, and met the objections of her nurse by saying:

"The fever cannot be much now; if you tell me something I shall not think so constantly of this atrocious pain. I am longing to be at home. Did you see the children?"

"No, Selene. I went no farther than the entrance of your dwelling, and the kind gate-keeper's wife told me at once that I should find neither your father nor your sister, and that your slave-woman was gone out to buy cakes for the children."

"To buy them!" exclaimed Selene in astonishment. "The old woman told me too that the way to your apartments led through several rooms in which slaves were at work, and that her son, who happened to be with her, should accompany me, and so he did, but the door was locked, and he told me I might entrust his mother with my commission. I did so, for she looked as if she were both judicious and kind."

"And she is very fond of you, for when I told her of your sufferings the bright tears rolled down her cheeks, and she praised you as warmly, and was as much troubled as if you had been her own daughter."

"You said nothing about our working in the factory?" asked Selene anxiously.

"Certainly not, you had desired me not to mention it. I was to say everything that was kind to you from the old lady."

For several minutes the two girls were silent, then Selene asked:

"Did the gate-keeper's son who accompanied you also hear of the disaster that had befallen me?

"Yes, on the way to your rooms he was full of fun and jokes, but when I told him that you had gone out with your damaged foot and now could not get home again, and were being treated by the leech, he was very angry and used blasphemous language."

"Can you remember what he said?"

"Not perfectly, but one thing I still recollect. He accused his gods of having created a beautiful work only to spoil it, nay he abused them" Mary looked down as she spoke, as if she were repeating something ill to tell, but Selene colored slightly with pleasure, and exclaimed eagerly, as if to outdo the sculptor in abuse:

"He is quite right, the powers above act in such a way—"

"That is not right," said the deformed girl reprovingly.

"What?" asked the patient. "Here you live quietly to yourselves in perfect peace and love. Many a word that I heard dame Hannah say has stuck in my mind, and I can see for myself that you act as kindly as you speak. The gods no doubt are good to you!"

"What!" exclaimed Selene with flashing eyes. "For those whose every pleasure they destroy? For the home of eight children whom they rob of their mother? For the poor whom they daily threaten to deprive of their bread-winner?"

"For them too, there is a merciful God," interrupted dame Hannah who had just come into the room. "I will lead you to the loving Father in Heaven who cares for us all as if we were His children; but not now—you must rest and neither talk nor hear of anything that can excite your fevered blood. Now I will rearrange the pillow under your head. Mary will wet a fresh compress and then you must try to sleep."

"I cannot," replied Selene, while Hannah shook her pillows and arranged them carefully. "Tell me about your God who loves us."

"By-and-bye, dear child. Seek Him and you will find Him, for of all His children He loves them best who suffer."

"Be quiet, child," interrupted Hannah, patting the sick girl with a soothing hand, "you soon will learn how God takes care of you and that Another loves you."

"Another," muttered Selene, and her cheeks turned crimson.

She thought at once of Pollux, and asked herself why the story of her sufferings should have moved him so deeply if he were not in love with her. Then she began to seek some colorable ground for what she had heard as she went past the screen behind which he had been working. He had never told her plainly that he loved her. Why should he, an artist and a bright, high spirited young fellow, not be allowed to jest with a pretty girl, even if his heart belonged to another. No, she was not indifferent to him: that she had felt that night when she had stood as his model, and now—as she thought—I could guess, nay, feel sure of, from Mary's story.

The longer she thought of him, the more she began to long to see him whom she had loved so dearly even as a child. Her heart had never yet beat for any other man, but since she had met Pollux again in the hall of the Muses, his image had filled her whole soul, and what she now felt must be love—could be nothing else. Half awake, but half asleep, she pictured him to herself, entering this quiet room, sitting down by the head of her couch, and looking with his kind eyes into hers. Ah! and how could she help it—she sat up and opened her arms to him.

"Be still, my child, he still," said Hannah. "It is not good for you to move about so much."

Selene opened her eyes, but only to close them again and to dream for some time longer till she was startled from her rest by loud voices in the garden. Hannah left the room, and her voice presently mingled with those of the other persons outside, and when she returned her cheeks were flushed and she could not find fitting words in which to tell her patient what she had to say.

"A very big man, in the most outrageous dress," she said at last, "wanted to be let in; when the gatekeeper refused, he forced his way in. He asked for you."

"For me," said Selene, blushing.

"Yes, my child, he brought a large and beautiful nosegay of flowers, and said 'your friend at Lochias sends you his greeting.'"

"My friend at Lochias?" murmured thoughtfully Selene to herself. Then her eyes sparkled with gladness, and she asked quickly:

You said the man who brought the flowers was very tall."

"Have you a lover, child?" asked the widow.

"A lover?—no, but there is a young man with whom we always used to play when we were quite little—an artist, a kind, good man—and the nosegay must be from him."

Hannah looked with sympathy at the girl, and signing to Mary she said:

"The nosegay is a very large one. You may see it, but it must not remain in the room; the smell of so many flowers might do you harm."

Mary rose from her seat at the head of the bed, and whispered to the sick girl: