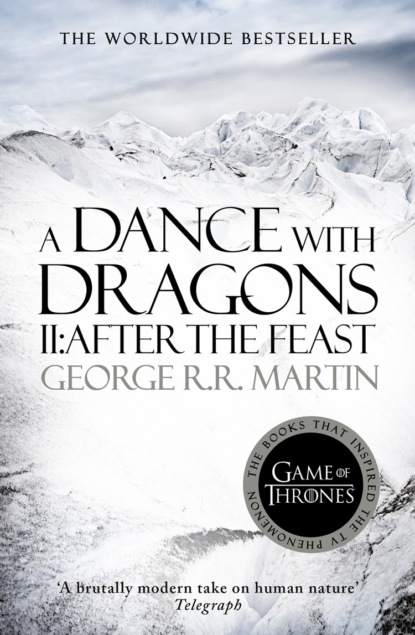 A Dance With Dragons. Part 2 After The Feast
George Raymond Richard Martin

HBO’s hit series A GAME OF THRONES is based on George R R Martin’s internationally bestselling series A SONG OF ICE AND FIRE, the greatest fantasy epic of the modern age.

A DANCE WITH DRAGONS: AFTER THE FEAST is the SECOND part of the fifth volume in the series.

The future of the Seven Kingdoms hangs in the balance.

In King’s Landing the Queen Regent, Cersei Lannister, awaits trial, abandoned by all those she trusted; while in the eastern city of Yunkai her brother Tyrion has been sold as a slave. From the Wall, having left his wife and the Red Priestess Melisandre under the protection of Jon Snow, Stannis Baratheon marches south to confront the Boltons at Winterfell. But beyond the Wall the wildling armies are massing for an assault…

On all sides bitter conflicts are reigniting, played out by a grand cast of outlaws and priests, soldiers and skinchangers, nobles and slaves. The tides of destiny will inevitably lead to the greatest dance of all.

A DANCE WITH DRAGONS

PART TWO: AFTER THE FEAST

A Song of Ice and Fire

Previously published in paperback by Voyager 2012

First published in Great Britain by Voyager in 2011

George R.R. Martin asserts the moral right to be identified as the author of this work

All rights reserved under International Copyright Conventions. By payment of the required fees, you have been granted the non-exclusive, non-transferable right to access and read the text of this e-book on-screen. No part of this text may be reproduced, transmitted, down-loaded, decompiled, reverse engineered, or stored in or introduced into any information storage and retrieval system, in any form or by any means, whether electronic or mechanical, now known or hereinafter invented, without the express written permission of HarperCollins e-books.

this one is for my fans

for my website wizards Elio and Linda, lords of Westeros, Winter and Fabio of WIC, and Gibbs of Dragonstone, who started it all

for men and women of Asshai in Spain who sang to us of a bear and a maiden fair and the fabulous fans of Italy who gave me so much wine for my readers in Finland, Germany, Brazil, Portugal, France, and the Netherlands and all the other distant lands where you’ve been waiting for this dance

thanks for your patience

The first flakes came drifting down as the sun was setting in the west. By nightfall snow was coming down so heavily that the moon rose behind a white curtain, unseen.

“The gods of the north have unleashed their wroth on Lord Stannis,” Roose Bolton announced come morning as men gathered in Winterfell’s Great Hall to break their fast. “He is a stranger here, and the old gods will not suffer him to live.”

His men roared their approval, banging their fists on the long plank tables. Winterfell might be ruined, but its granite walls would still keep the worst of the wind and weather at bay. They were well stocked with food and drink; they had fires to warm them when off duty, a place to dry their clothes, snug corners to lie down and sleep. Lord Bolton had laid by enough wood to keep the fires fed for half a year, so the Great Hall was always warm and cozy. Stannis had none of that.

Theon Greyjoy did not join the uproar. Neither did the men of House Frey, he did not fail to note. They are strangers here as well, he thought, watching Ser Aenys Frey and his half-brother Ser Hosteen. Born and bred in the riverlands, the Freys had never seen a snow like this. The north has already claimed three of their blood, Theon thought, recalling the men that Ramsay had searched for fruitlessly, lost between White Harbor and Barrowton.

On the dais, Lord Wyman Manderly sat between a pair of his White Harbor knights, spooning porridge into his fat face. He did not seem to be enjoying it near as much as he had the pork pies at the wedding. Elsewhere one-armed Harwood Stout talked quietly with the cadaverous Whoresbane Umber.

Theon queued up with the other men for porridge, ladled into wooden bowls from a row of copper kettles. The lords and knights had milk and honey and even a bit of butter to sweeten their portions, he saw, but none of that would be offered him. His reign as prince of Winterfell had been a brief one. He had played his part in the mummer’s show, giving the feigned Arya to be wed, and now he was of no further use to Roose Bolton.

“First winter I remember, the snows came over my head,” said a Hornwood man in the queue ahead of him.

“Aye, but you were only three foot tall at the time,” a rider from the Rills replied.