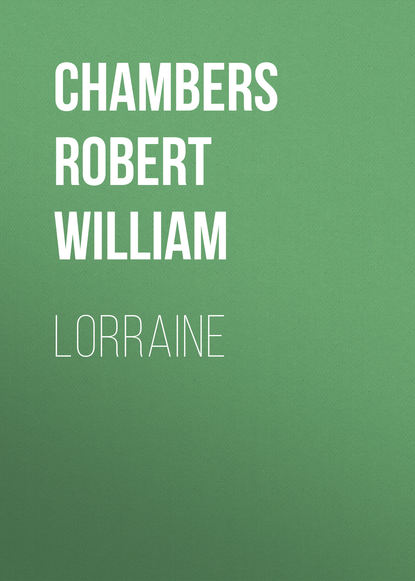 When Yesterday shall dawn again,
And the long line athwart the hill
Shall quicken with the bugle's thrill,
Thine own shall come to thee, Lorraine!

Then in each vineyard, vale, and plain,
The quiet dead shall stir the earth
And rise, reborn, in thy new birth—
Thou holy martyr-maid, Lorraine!

Is it in vain thy sweet tears stain
Thy mother's breast? Her castled crest
Is lifted now! God guide her quest!
She seeks thine own for thee, Lorraine!

So Yesterday shall live again,
And the steel line along the Rhine
Shall cuirass thee and all that's thine.
France lives—thy France—divine Lorraine!

Occasionally the author has deemed it best to change the names of villages, officers, and regiments or battalions.

The author believes that the romance separated from the facts should leave the historical basis virtually accurate.

A MAKER OF MAPS

There was a rustle in the bushes, the sound of twigs snapping, a soft foot-fall on the dead leaves.

Marche stopped, took his pipe out of his mouth, and listened.

Patter! patter! patter! over the crackling underbrush, now near, now far away in the depths of the forest; then sudden silence, the silence that startles.

He turned his head warily, right, left; he knelt noiselessly, striving to pierce the thicket with his restless eyes. After a moment he arose on tiptoe, unslung his gun, cocked both barrels, and listened again, pipe tightly clutched between his white teeth.

All around lay the beautiful Lorraine forests, dim and sweet, dusky as velvet in their leafy depths. A single sunbeam, striking obliquely through the brush tangle, powdered the forest mould with gold.

He heard the little river Lisse, flowing, flowing, where green branches swept its placid surface with a thousand new-born leaves; he heard a throstle singing in the summer wind.

Suddenly, far ahead, something gray shambled loosely across the path, leaped a brush heap, slunk under a fallen tree, and loped on again.

For a moment Marche refused to believe his own eyes. A wolf in Lorraine!—a big, gray timber-wolf, here, within a mile of the Château Morteyn! He could see it yet, passing like a shadow along the trees. Before he knew it he was following, running noiselessly over the soft, mossy path, holding his little shot-gun tightly. As he ran, his eyes fixed on the spot where the wolf had disappeared, he began to doubt his senses again, he began to believe that the thing he saw was some shaggy sheep-dog from the Moselle, astray in the Lorraine forests. But he held his pace, his pipe griped in his teeth, his gun swinging at his side. Presently, as he turned into a grass-grown carrefour, a mere waste of wild-flowers and tangled briers, he caught his ankle in a strand of ivy and fell headlong. Sprawling there on the moss and dead leaves, the sound of human voices struck his ear, and he sat up, scowling and rubbing his knees.

The voices came nearer; two people were approaching the carrefour. Jack Marche, angry and dirty, looked through the bushes, stanching a long scratch on his wrist with his pocket-handkerchief. The people were in sight now—a man, tall, square-shouldered, striding swiftly through the woods, followed by a young girl. Twice she sprang forward and seized him by the arm, but he shook her off roughly and hastened on. As they entered the carrefour, the girl ran in front of him and pushed him back with all her strength.

"Come, now," said the man, recovering his balance, "you had better stop this before I lose patience. Go back!"

The girl barred his way with slender arms out-stretched.

"What are you doing in my woods?" she demanded. "Answer me! I will know, this time!"

"Let me pass!" sneered the man. He held a roll of papers in one hand; in the other, steel compasses that glittered in the sun.

"Get out of my path," said the man, sullenly.

"Then give me that map you have made! I know what you are! You come from across the Rhine!"

The man scowled and stepped towards her.

"You are a German spy!" she cried, passionately.

"You little fool!" he snarled, seizing her arm. He shook her brutally; the scarlet skirts fluttered, a little rent came in the velvet bodice, the heavy, shining hair tumbled down over her eyes.

In a moment Marche had the man by the throat. He held him there, striking him again and again in the face. Twice the man tried to stab him with the steel compasses, but Marche dragged them out of his fist and hammered him until he choked and spluttered and collapsed on the ground, only to stagger to his feet again and lurch into the thicket of second growth. There he tripped and fell as Marche had fallen on the ivy, but, unlike Marche, he wriggled under the bushes and ran on, stooping low, never glancing back.

The impulse that comes to men to shoot when anything is running for safety came over Marche for an instant. Instinctively he raised his gun, hesitated, lowered it, still watching the running man with cold, bright eyes.

"Well," he said, turning to the girl behind him, "he's gone now. Ought I to have fired? Ma foi! I'm sorry I didn't! He has torn your bodice and your skirt!"

"We have the map," she said, with a little gasp.

Marche picked up a crumpled roll of paper from the ground and opened it. It contained a rough topographical sketch of the surrounding country, a detail of a dozen small forest paths, a map of the whole course of the river Lisse from its source to its junction with the Moselle, and a beautiful plan of the Château de Nesville.