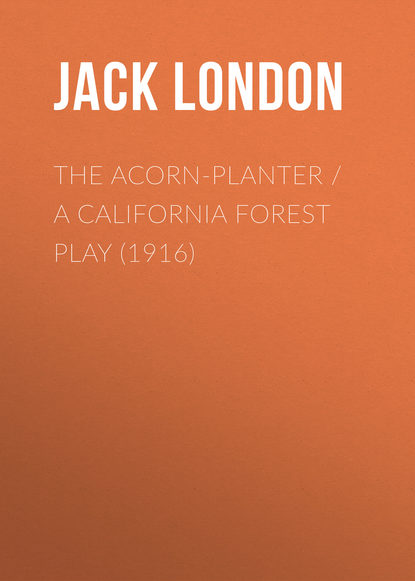 The Acorn-Planter / A California Forest Play (1916)

In the morning of the world, while his tribe
makes its camp for the night in a grove, Red
Cloud, the first man of men, and the first man
of the Nishinam, save in war, sings of the duty
of life, which duty is to make life more abundant.
The Shaman, or medicine man, sings of
foreboding and prophecy. The War Chief, who
commands in war, sings that war is the only
way to life. This Red Cloud denies, affirming
that the way of life is the way of the acorn-
planter, and that whoso slays one man slays
the planter of many acorns. Red Cloud wins
the Shaman and the people to his contention.

After the passage of thousands of years, again
in the grove appear the Nishinam. In Red
Cloud, the War Chief, the Shaman, and the
Dew-Woman are repeated the eternal figures
of the philosopher, the soldier, the priest, and
the woman—types ever realizing themselves
afresh in the social adventures of man. Red
Cloud recognizes the wrecked explorers as
planters and life-makers, and is for treating
them with kindness. But the War Chief and
the idea of war are dominant The Shaman
joins with the war party, and is privy to the
massacre of the explorers.

A hundred years pass, when, on their seasonal
migration, the Nishinam camp for the night in
the grove. They still live, and the war formula
for life seems vindicated, despite the imminence
of the superior life-makers, the whites, who are
flooding into California from north, south, east,
and west—the English, the Americans, the
Spaniards, and the Russians. The massacre by
the white men follows, and Red Cloud, dying,
recognizes the white men as brother acorn-planters,
the possessors of the superior life-formula
of which he had always been a protagonist.

In the Epilogue, or Apotheosis, occur the
celebration of the death of war and the triumph
of the acorn-planters.

Time. In the morning of the world.
Scene. A forest hillside where great trees stand with wide
spaces between. A stream flows from a spring that bursts
out of the hillside. It is a place of lush ferns and brakes,
also, of thickets of such shrubs as inhabit a redwood forest
floor. At the left, in the open level space at the foot of the
hillside, extending out of sight among the trees, is visible a
portion of a Nishinam Indian camp. It is a temporary
camp for the night. Small cooking fires smoulder. Standing
about are withe-woven baskets for the carrying of supplies
and dunnage. Spears and bows and quivers of arrows lie
about. Boys drag in dry branches for firewood. Young
women fill gourds with water from the stream and proceed
about their camp tasks. A number of older women are
pounding acorns in stone mortars with stone pestles. An
old man and a Shaman, or priest, look expectantly up the
hillside. All wear moccasins and are skin-clad, primitive,
in their garmenting. Neither iron nor woven cloth occurs
in the weapons and gear.

Old Man     (After inspection of hillside.)     He has chased the deer far. He is patient.
In the chase he is patient like an old man.

Shaman     His feet are as fleet as the deer's.

Shaman     (More assertively.)     He is his father. It is so spoken. He is
his father's father. He is the first man, the
first Red Cloud, ever born, and born again, to
chiefship of his people.

Shaman     His father was the Coyote. His mother was