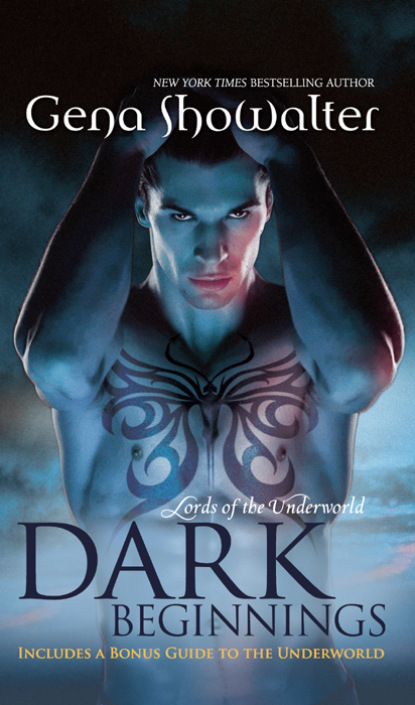 Three dark and sensual tales of the Lords of the Underworld – plus a bonus guide to their world!

The Darkest Fire Geryon is the guardian of hell. Kadence is a goddess, more angel than woman. Together they will enter the flames to battle a horde of demon lords and discover a passion unlike any other. The Darkest Prison Once Atlas was the Greek goddess Nike’s slave. Now he is her master.

But these sworn rivals destined to destroy each other will be forced to risk everything for a chance at love The Darkest Angel The angel Lysander has never known lust until he meets Bianka. The beautiful but deadly Harpy is determined to lead iron-willed Lysander into temptation.

In a remote fortress in Budapest, six immortal warriors – each more dangerously seductive than the last – are bound by an ancient curse none has been able to break. When a powerful enemy returns, they will travel the world in search of a sacred relic of the gods – one that threatens to destroy them all.

containing three stories and a bonus guide to the Underworld!

And don’t miss the next Lords of the Underworld book

Coming next month from MIRA®

New York Times and USA Today bestselling author Gena Showalter has been praised for her “sizzling page turners” and “utterly spellbinding stories”. She is the author of more than seventeen novels and anthologies, including breathtaking paranormal and contemporary romances, cutting-edge young adult novels, and stunning urban fantasy. Readers can’t get enough of her trademark wit and singular imagination.

EVERY DAY FOR HUNDREDS of years the goddess had visited Hell and every day Geryon had watched her from his station, desire heating his blood more than the flames of damnation beyond his post ever had. He should not have studied her that first time and should have kept his gaze downcast all the times since. He was a slave to the prince of darkness, spawned by evil; she was a goddess, created in light.

And yet, still he watched her this day as she floated through the barren cavern, coral-tipped fingers tracing the jagged stones that separated underground from underworld. Golden ringlets flowed down her elegant back and framed a face so perfect, so lovely, Aphrodite herself could not compare. Eyes of starlight narrowed, a rosy color blooming in those cheeks of smooth alabaster.

“The wall is cracked,” she said, her voice like a song amid the hiss of nearby flames—and the unnatural screams that always accompanied them.

He shook his head, positive he had merely imagined the words. In all their centuries together, they had never spoken, never deviated from their routine. As the Guardian of Hell, he ensured the gate remained closed until a spirit needed to be cast inside. That way, no one and nothing escaped—and if they tried, he rendered punishment. As the goddess of Oppression, she fortified the physical barrier with only a touch. Silence was never breeched.

Uncertainty darkened her features. “Have you nothing to say?”

She stood in front of him a moment later, though he never saw her move. The scent of honeysuckle suddenly overshadowed the stink of sulfur and melting flesh, and he inhaled deeply, closing his eyes in ecstasy. Oh, that she would remain just as she was…

“Goddess.” He forced his lids to open gradually, slowly revealing the glow of her beauty. Up close, she was not as perfect as he had thought. She was better. A smattering of freckles dotted her sweetly sloped nose, and dimples appeared with the curve of her half-smile. Exquisite.

What did she think of him? he wondered.

She probably thought him a monster, hideous and misshapen. Which he was. But if she thought so, she did not show it. Only curiosity rested in those starlight eyes. For the wall, he suspected, not for him. Even when he’d been human, women had wanted nothing to do with him. They’d run from him the moment he’d turned his attention to them. He’d been too tall, too brawny, too bumbling. And that was before he’d resembled an ogre.

Sometimes he wondered if he’d been tainted at birth.

“Those cracks were not there yesterday,” she said. “What has caused such damage? And so swiftly?”

“A horde of Demon Lords rise from the pit daily and fight to break out. They have grown tired of their confinement here and seek living humans to torment.”

She accepted the news without reaction. “Have you their names?”

He nodded. He did not need to see beyond the gate to know who visited on the other side; he sensed it. Always. “Violence, Death, Lies, Doubt, Misery. Shall I go on?”

“No,” she said softly. “I understand. The worst of the worst.”

“Yes. They bang and they claw from the other side, desperate to reach the mortal realm.”

“Well, stop them.” A command, laced with husky entreaty.

If only. He would have given up the last vestiges of his humanity to do as she wished. Anything to repay the daily gift of her presence. Anything to keep her just where she was, prolonging the sweetness of her scent. “I am forbidden to leave my post, just as I am forbidden to open the gates for any reason but allowing one of the damned inside. I’m afraid I cannot grant your request.”

Besides, the only way to stop a determined demon was to kill it, and killing a High Lord was another forbidden act.

A sigh slipped from her. “Do you always do as you’re told?”

“Always.” Once he had fought the invisible ties that bound him. Once, but no longer. To fight was to invite pain and suffering—not for him, but for others. Innocent humans who resembled his mother, his father and his brothers—because his true mother, father and brothers had already been slain—were brought here and tortured in front of him. The screams…oh, the screams. Far worse than the ones that seeped from Hell. And the sights…He shuddered.

Had the pain and suffering been heaped upon him, he would not have cared. Would have laughed and fought all the harder. What was a little more pain? But Lucifer, brother to Hades and prince of the demons, needed him healthy, whole, so had found other ways to gain his cooperation.