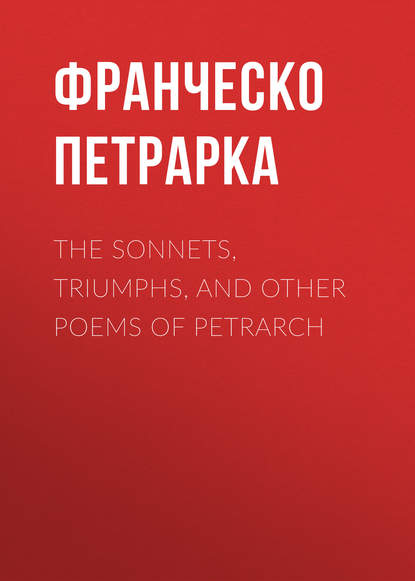 Франческо Петрарка
The Sonnets, Triumphs, and Other Poems of Petrarch

The Sonnets, Triumphs, and Other Poems of Petrarch
Франческо Петрарка

The Sonnets, Triumphs, and Other Poems of Petrarch

The present translation of Petrarch completes the Illustrated Library series of the Italian Poets emphatically distinguished as "I Quattro Poeti Italiani."

It is rather a singular fact that, while the other three Poets of this world-famed series—Dante, Ariosto, and Tasso—have each found several translators, no complete version of the fourth, and in Italy the most popular, has hitherto been presented to the English reader. This lacune becomes the more remarkable when we consider the great influence which Petrarch has undoubtedly exercised on our poetry from the time of Chaucer downwards.

The plan of the present volume has been to select from all the known versions those most distinguished for fidelity and rhythm. Of the more favourite poems, as many as three or four are occasionally given; while of others, and those by no means few, it has been difficult to find even one. Indeed, many must have remained entirely unrepresented but for the spirited efforts of Major Macgregor, who has recently translated nearly the whole, and that with great closeness both as to matter and form. To this gentleman we have to return our especial thanks for his liberal permission to make free use of his labours.

The order of arrangement is that adopted by Marsand and other recent editors; but to prevent any difficulty in identification, the Italian first lines have been given throughout, and repeated in an alphabetical index.

The Life of Petrarch prefixed is a condensation of the poet Campbell's two octavo volumes, and includes all the material part of that work.

1305. Is taken to Incisa at the age of seven months, where he remains seven years.

1312. Is removed to Pisa, where he remains seven months.

1313. Accompanies his parents to Avignon.

1326. Returns to Avignon—loses his parents—contracts a friendship with James Colonna.

1330. Goes to Lombes with James Colonna—forms acquaintance with Socrates and Lælius—and returns to Avignon to live in the house of Cardinal Colonna.

1331. Travels to Paris—travels through Flanders and Brabant, and visits a part of Germany.

1333. His first journey to Rome—his long navigation as far as the coast of England—his return to Avignon.

1337. Birth of his son John—he retires to Vaucluse.

1340. Receives an invitation from Rome to come and be crowned as Laureate—and another invitation, to the same effect, from Paris.

1341. Goes to Naples, and thence to Rome, where he is crowned in the Capitol—repairs to Parma—death of Tommaso da Messina and James Colonna.

1342. Goes as orator of the Roman people to Clement VI. at Avignon—Studies the Greek language under Barlaamo.

1343. Birth of his daughter Francesca—he writes his dialogues "De secreto conflictu curarum suarum"—is sent to Naples by Clement VI. and Cardinal Colonna—goes to Rome for a third and a fourth time—returns from Naples to Parma.

1345. Leaves Parma, goes to Bologna, and thence to Verona—returns to Avignon.

1346. Continues to live at Avignon—is elected canon of Parma.

1348. Goes to Verona—death of Laura—he returns again to Parma—his autograph memorandum in the Milan copy of Virgil—visits Manfredi, Lord of Carpi, and James Carrara at Padua.

1349. Goes from Parma to Mantua and Ferrara—returns to Padua, and receives, probably in this year, a canonicate in Padua.

1350. Is raised to the Archdeaconry of Parma—writes to the Emperor Charles IV.—goes to Rome, and, in going and returning, stops at Florence.

1351. Writes to Andrea Dandolo with a view to reconcile the Venetians and Florentines—the Florentines decree the restoration of his paternal property, and send John Boccaccio to recall him to his country—he returns, for the sixth time, to Avignon—is consulted by the four Cardinals, who had been deputed to reform the government of Rome.

1352. Writes to Clement VI. the letter which excites against him the enmity of the medical tribe—begins writing his treatise "De Vita Solitaria."

1353. Visits his brother in the Carthusian monastery of Monte Rivo—writes his treatise "De Otio Religiosorum"—returns to Italy—takes up his abode with the Visconti—is sent by the Archbishop Visconti to Venice, to negotiate a peace between the Venetians and Genoese.

1355. His embassy to the Emperor—publishes his "Invective against a Physician."

1361. Leaves Milan and settles at Venice—gives his library to the Venetians.

1366. Writes to Urban V. imploring him to remove the Papal residence to Rome—finishes his treatise "De Remediis utriusque Fortunæ."

1368. Quits Venice—four young Venetians, either in this year or the preceding, promulgate a critical judgment against Petrarch—repairs to Pavia to negotiate peace between the Pope's Legate and the Visconti.

1370. Sets out to visit the Pontiff—is taken ill at Ferrara—retires to Arquà among the Euganean hills.

1371. Writes his "Invectiva contra Gallum," and his "Epistle to Posterity."