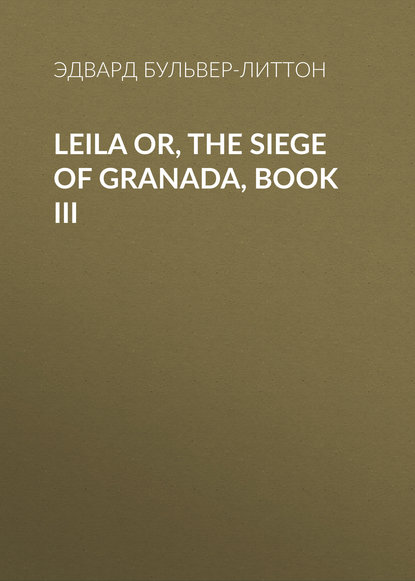 Leila or, the Siege of Granada, Book III

ISABEL AND THE JEWISH MAIDEN

While this scene took place before the tribunal of Torquemada, Leila had been summoned from the indulgence of fears, which her gentle nature and her luxurious nurturing had ill-fitted her to contend against, to the presence of the queen. That gifted and high-spirited princess, whose virtues were her own, whose faults were of her age, was not, it is true, without the superstition and something of the intolerant spirit of her royal spouse: but, even where her faith assented to persecution, her heart ever inclined to mercy; and it was her voice alone that ever counteracted the fiery zeal of Torquemada, and mitigated the sufferings of the unhappy ones who fell under the suspicion of heresy. She had, happily, too, within her a strong sense of justice, as well as the sentiment of compassion; and often, when she could not save the accused, she prevented the consequences of his imputed crime falling upon the innocent members of his house or tribe.

In the interval between his conversation with Ferdinand and the examination of Almamen, the Dominican had sought the queen; and had placed before her, in glowing colours, not only the treason of Almamen, but the consequences of the impious passion her son had conceived for Leila. In that day, any connection between a Christian knight and a Jewess was deemed a sin, scarce expiable; and Isabel conceived all that horror of her son's offence which was natural in a pious mother and a haughty queen. But, despite all the arguments of the friar, she could not be prevailed upon to render up Leila to the tribunal of the Inquisition; and that dread court, but newly established, did not dare, without her consent, to seize upon one under the immediate protection of the queen.

"Fear not, father," said Isabel, with quiet firmness, "I will take upon myself to examine the maiden; and, at least, I will see her removed from all chance of tempting or being tempted by this graceless boy. But she was placed under the charge of the king and myself as a hostage and a trust; we accepted the charge, and our royal honor is pledged to the safety of the maiden. Heaven forbid that I should deny the existence of sorcery, assured as we are of its emanation from the Evil One; but I fear, in this fancy of Juan's, that the maiden is more sinned against than sinning: and yet my son is, doubtless, not aware of the unhappy faith of the Jewess; the knowledge of which alone will suffice to cure him of his error. You shake your head, father; but, I repeat, I will act in this affair so as to merit the confidence I demand. Go, good Tomas. We have not reigned so long without belief in our power to control and deal with a simple maiden."

The queen extended her hand to the monk, with a smile so sweet in its dignity, that it softened even that rugged heart; and, with a reluctant sigh, and a murmured prayer that her counsels might be guided for the best, Torquemada left the royal presence.

"The poor child!" thought Isabel, "those tender limbs, and that fragile form, are ill fitted for yon monk's stern tutelage. She seems gentle: and her face has in it all the yielding softness of our sex; doubtless by mild means, she may be persuaded to abjure her wretched creed; and the shade of some holy convent may hide her alike from the licentious gaze of my son and the iron zeal of the Inquisitor. I will see her."

When Leila entered the queen's pavilion, Isabel, who was alone, marked her trembling step with a compassionate eye; and, as Leila, in obedience to the queen's request, threw up her veil, the paleness of her cheek and the traces of recent tears appealed to Isabel's heart with more success than had attended all the pious invectives of Torquemada.

"Maiden," said Isabel, encouragingly, "I fear thou hast been strangely harassed by the thoughtless caprice of the young prince. Think of it no more. But, if thou art what I have ventured to believe, and to assert thee to be, cheerfully subscribe to the means I will suggest for preventing the continuance of addresses which cannot but injure thy fair name."

"Ah, madam!" said Leila, as she fell on one knee beside the queen, "most joyfully, most gratefully, will I accept any asylum which proffers solitude and peace."

"The asylum to which I would fain lead thy steps," answered Isabel, gently, "is indeed one whose solitude is holy—whose peace is that of heaven. But of this hereafter. Thou wilt not hesitate, then, to quit the camp, unknown to the prince, and ere he can again seek thee?"

"Hesitate, madam? Ah rather, how shall I express my thanks?"

"I did not read that face misjudgingly," thought the queen, as she resumed. "Be it so; we will not lose another night. Withdraw yonder, through the inner tent; the litter shall be straight prepared for thee; and ere midnight thou shalt sleep in safety under the roof of one of the bravest knights and noblest ladies that our realm can boast. Thou shalt bear with thee a letter that shall commend thee specially to the care of thy hostess—thou wilt find her of a kindly and fostering nature. And, oh, maiden!" added the queen, with benevolent warmth, "steel not thy heart against her—listen with ductile senses to her gentle ministry; and may God and His Son prosper that pious lady's counsel, so that it may win a new strayling to the Immortal Fold!"

Leila listened and wondered, but made no answer; until, as she gained the entrance to the interior division of the tent, she stopped abruptly, and said, "Pardon me, gracious queen, but dare I ask thee one question?—it is not of myself."

"My father—hath aught been heard of him? He promised, that ere the fifth day were past, he would once more see his child; and, alas! that date is past, and I am still alone in the dwelling of the stranger."

"Unhappy child!" muttered Isabel to herself; "thou knowest not his treason nor his fate—yet why shouldst thou? Ignorant of what would render thee blest hereafter, continue ignorant of what would afflict thee here. Be cheered, maiden," answered the queen, aloud. "No doubt, there are reasons sufficient to forbid your meeting. But thou shalt not lack friends in the dwelling-house of the stranger."

"Ah, noble queen, pardon me, and one word more! There hath been with me, more than once, a stern old man, whose voice freezes the blood within my veins; he questions me of my father, and in the tone of a foe who would entrap from the child something to the peril of the sire. That man—thou knowest him, gracious queen—he cannot have the power to harm my father?"

"Peace, maiden! the man thou speakest of is the priest of God, and the innocent have nothing to dread from his reverend zeal. For thyself, I say again, be cheered; in the home to which I consign thee thou wilt see him no more. Take comfort, poor child—weep not: all have their cares; our duty is to bear in this life, reserving hope only for the next."

The queen, destined herself to those domestic afflictions which pomp cannot soothe, nor power allay, spoke with a prophetic sadness which yet more touched a heart that her kindness of look and tone had already softened; and, in the impulse of a nature never tutored in the rigid ceremonials of that stately court, Leila suddenly came forward, and falling on one knee, seized the hand of her protectress, and kissed it warmly through her tears.