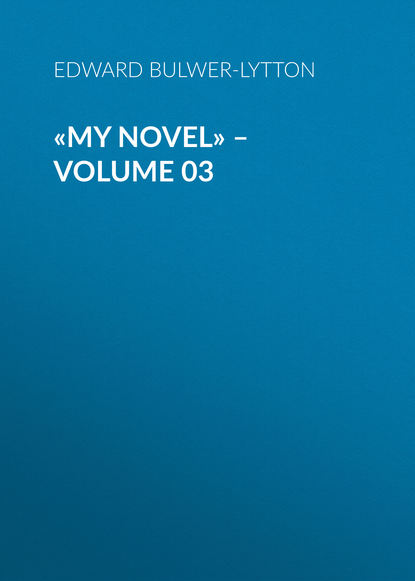 SHOWING HOW MY NOVEL CAME TO BE CALLED "MY NOVEL."

"I am not displeased with your novel, so far as it has gone," said my father, graciously; "though as for the Sermon—" Here I trembled; but the ladies, Heaven bless them! had taken Parson Dale under their special protection; and observing that my father was puckering up his brows critically, they rushed forward boldly in defence of The Sermon, and Mr. Caxton was forced to beat a retreat. However, like a skilful general, he renewed the assault upon outposts less gallantly guarded. But as it is not my business to betray my weak points, I leave it to the ingenuity of cavillers to discover the places at which the Author of "Human Error" directed his great guns.

"But," said the captain, "you are a lad of too much spirit, Pisistratus, to keep us always in the obscure country quarters of Hazeldean,—you will march us out into open service before you have done with us?"

PISISTRATUS (magisterially, for he has been somewhat nettled by Mr. Caxton's remarks, and he puts on an air of dignity in order to awe away minor assailants).—"Yes, Captain Roland; not yet a while, but all in good time. I have not stinted myself in canvas, and behind my foreground of the Hall and the Parsonage I propose hereafter to open some lengthened perspective of the varieties of English life—"

BLANCHE (putting her hand on my father's lip).—"We shall know better the design, perhaps, when we know the title. Pray, Mr. Author, what is the title?"

MY MOTHER (with more animation than usual).—"Ay, Sisty, the title!"

PISISTRATUS (startled).—"The title! By the soul of Cervantes! I have never yet thought of a title!"

CAPTAIN ROLAND (solemnly).—"There is a great deal in a good title. As a novel reader, I know that by experience."

MR. SQUILLS.—"Certainly; there is not a catchpenny in the world but what goes down, if the title be apt and seductive. Witness 'Old Parr's Life Pills.' Sell by the thousand, Sir, when my 'Pills for Weak Stomachs,' which I believe to be just the same compound, never paid for the advertising."

MR. CAXTON.—"Parr's Life Pills! a fine stroke of genius. It is not every one who has a weak stomach, or time to attend to it if he have. But who would not swallow a pill to live to a hundred and fifty-two?"

PISISTRATUS (stirring the fire in great excitement).—"My title! my title!—what shall be my title?"

MR. CAXTON (thrusting his hand into his waistcoat, and in his most didactic of tones).—"From a remote period, the choice of a title has perplexed the scribbling portion of mankind. We may guess how their invention has been racked by the strange contortions it has produced. To begin with the Hebrews. 'The Lips of the Sleeping' (Labia Dormientium)– what book did you suppose that title to designate?—A Catalogue of Rabbinical Writers! Again, imagine some young lady of old captivated by the sentimental title of 'The Pomegranate with its Flower,' and opening on a Treatise on the Jewish Ceremonials! Let us turn to the Romans. Aulus Gellius commences his pleasant gossipping 'Noctes' with a list of the titles in fashion in his day. For instance, 'The Muses' and 'The Veil,' 'The Cornucopia,' 'The Beehive,' and 'The Meadow.' Some titles, indeed, were more truculent, and promised food to those who love to sup upon horrors,—such as 'The Torch,' 'The Poniard,' 'The Stiletto'—"

PISISTRATUS (impatiently).—"Yes, sir, but to come to My Novel."

MR. CAXTON (unheeding the interruption).—"You see you have a fine choice here, and of a nature pleasing, and not unfamiliar, to a classical reader; or you may borrow a hint from the early dramatic writers."

PISISTRATUS (more hopefully).—"Ay, there is something in the Drama akin to the Novel. Now, perhaps, I may catch an idea."

MR. CAXTON.—"For instance, the author of the 'Curiosities of Literature' (from whom, by the way, I am plagiarizing much of the information I bestow upon you) tells us of a Spanish gentleman who wrote a Comedy, by which he intended to serve what he took for Moral Philosophy."

MR. CAXTON.–"And called it 'The Pain of the Sleep of the World.'"

MR. CAXTON.—"Grave things were then called Comedies, as old things are now called Novels. Then there are all the titles of early Romance itself at your disposal,—'Theagenes and Chariclea' or 'The Ass' of Longus, or 'The Golden Ass' of Apuleius, or the titles of Gothic Romance, such as 'The most elegant, delicious, mellifluous, and delightful History of Perceforest, King of Great Britain.'" And therewith my father ran over a list of names as long as the Directory, and about as amusing.

"Well, to my taste," said my mother, "the novels I used to read when a girl (for I have not read many since, I am ashamed to say)—"

MY MOTHER (proceeding).—"Were much more inviting than any you mention, Austin."

MY MOTHER.—"'Says she to her Neighbour, What?'"

THE CAPTAIN.—"'The Unknown, or the Northern Gallery'—"

PISISTRATUS (pushed to the verge of human endurance, and upsetting tongs, poker, and fire-shovel).—" What nonsense you are talking, all of you! For Heaven's sake consider what an important matter we are called upon to decide. It is not now the titles of those very respectable works which issued from the Minerva Press that I ask you to remember,—it is to invent a title for mine,—My Novel!"

PISISTRATUS.—"What is it, sir, what is it? Have you really thought of a title to My Novel?"

MR. CAXTON.—"You have hit it yourself,—'My Novel.' It is your Novel; people will know it is your Novel. Turn and twist the English language as you will, be as allegorical as Hebrew, Greek, Roman, Fabulist, or Puritan, still, after all, it is your Novel, and nothing more nor less than your Novel."

MR. CAXTON.—"Add what you say you intend it to depict,—Varieties in English Life."

MY MOTHER.—"'My Novel; or, Varieties in English Life'—I don't think it sounds amiss. What say you, Roland? Would it attract you in a catalogue?"

SQUILLS.—"If it be not too great a liberty, pray who or what is Camarina?"

MR. CAXTON.—"Camarina, Mr. Squills, was a lake, apt to be low, and then liable to be muddy; and 'Don't disturb Camarina' was a Greek proverb derived from an oracle of Apollo; and from that Greek proverb, no doubt, comes the origin of the injunction, 'Quieta non movere,' which became the favourite maxim of Sir Robert Walpole and Parson Dale. The Greek line, Mr. Squills" (here my father's memory began to warm), "is preserved by Stephanus Byzantinus, 'De Urbibus,'

Zenobius explains it in his proverbs; Suidas repeats Zenobius; Lucian alludes to it; so does Virgil in the Third Book of the AEneid; and Silius Italicus imitates Virgil,—

"Parson Dale, as a clergyman and a scholar, had, no doubt, these authorities at his fingers' end. And I wonder he did not quote them," quoth my father; "but to be sure he is represented as a mild man, and so might not wish to humble the squire over-much in the presence of his family. Meanwhile, My Novel is My Novel; and now that, that matter is settled, perhaps the tongs, poker, and shovel may be picked up, the children may go to bed, Blanche and Kitty may speculate apart upon the future dignities of the Neogilos,—taking care, nevertheless, to finish the new pinbefores he requires for the present; Roland may cast up his account book, Mr. Squills have his brandy and water, and all the world be comfortable, each in his own way. Blanche, come away from the screen, get me my slippers, and leave Pisistratus to himself. [Greek line]—don't disturb Camarina. You see, my dear," added my father kindly, as, after settling himself into his slippers, he detained Blanche's hand in his own,—"you see, my dear, every house has its Camarina. Alan, who is a lazy animal, is quite content to let it alone; but woman, being the more active, bustling, curious creature, is always for giving it a sly stir."

BLANCHE (with female dignity).—"I assure you, that if Pisistratus had not called me, I should not have—"

MR. CAXTON (interrupting her, without lifting his eyes from the book he had already taken).—"Certainly you would not. I am now in the midst of the great Oxford Controversy. [The same Greek proverb]—don't disturb Camarina."