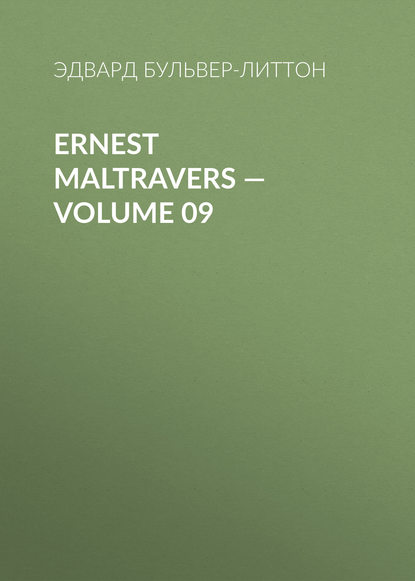 /Much Ado about Nothing/.

THE wound which Maltravers had received was peculiarly severe and rankling. It is true that he had never been what is called violently in love with Florence Lascelles; but from the moment in which he had been charmed and surprised into the character of a declared suitor, it was consonant with his scrupulous and loyal nature to view only the bright side of Florence's gifts and qualities, and to seek to enamour his grateful fancy with her beauty, her genius, and her tenderness for himself. He had thus forced and formed his thoughts and hopes to centre all in one object; and Florence and the Future had grown words which conveyed the same meaning to his mind. Perhaps he felt more bitterly her sudden and stunning accusations, couched as they were in language so unqualified, because they fell upon his pride rather than his affection, and were not softened away by the thousand excuses and remembrances which a passionate love would have invented and recalled. It was a deep, concentrated sense of injury and insult, that hardened and soured his whole nature—wounded vanity, wounded pride, and wounded honour.

And the blow, too, came upon him at a time when he was most dissatisfied with all other prospects. He was disgusted with the littleness of the agents and springs of political life—he had formed a weary contempt for the barrenness of literary reputation. At thirty years of age he had necessarily outlived the sanguine elasticity of early youth, and he had already broken up many of those later toys in business and ambition which afford the rattle and the hobby-borse to our maturer manhood. Always asking for something too refined and too exalted for human life, every new proof of unworthiness in men and things saddened or revolted a mind still too fastidious for that quiet contentment with the world as it is, which we must all learn before we can make our philosophy practical and our genius as fertile of the harvest as it may be prodigal of the blossom. Haughty, solitary, and unsocial, the ordinary resources of mortified and disappointed men were not for Ernest Maltravers. Rigidly secluded in his country retirement, he consumed the days in moody wanderings; and in the evenings he turned to books with a spirit disdainful and fatigued. So much had he already learned, that books taught him little that he did not already know. And the biographies of authors, those ghost-like beings who seem to have had no life but in the shadow of their own haunting and imperishable thoughts, dimmed the inspiration he might have caught from their pages. Those slaves of the Lamp, those Silkworms of the Closet, how little had they enjoyed, how little had they lived! Condemned to a mysterious fate by the wholesale destinies of the world, they seemed born but to toil and to spin thoughts for the common crowd—and, their task performed in drudgery and in darkness, to die when no further service could be wrung from their exhaustion. Names had they been in life, and as names they lived for ever, in life as in death, airy and unsubstantial phantoms. It pleased Maltravers at this time to turn a curious eye towards the obscure and half-extinct philosophies of the ancient world. He compared the Stoics with the Epicureans—those Epicureans who had given their own version to the simple and abstemious utilitarianism of their master. He asked which was the wiser, to sharpen pain or to deaden pleasure—to bear all or to enjoy all; and, by a natural reaction which often happens to us in life, this man, hitherto so earnest, active-spirited, and resolved on great things, began to yearn for the drowsy pleasures of indolence. The garden grew more tempting than the porch. He seriously revolved the old alternative of the Grecian demi-god—might it not be wiser to abandon the grave pursuits to which he had been addicted, to dethrone the august but severe ideal in his heart, to cultivate the light loves and voluptuous trifles of the herd, and to plant the brief space of youth yet left to him with the myrtle and the rose? As water flows over water, so new schemes rolled upon new—sweeping away every momentary impression, and leaving the surface facile equally to receive and to forget. Such is the common state with men of imagination in those crises of life, when some great revolution of designs and hopes unsettles elements too susceptible of every changing wind. And thus the weak are destroyed, while the strong relapse, after terrible but unknown convulsions, into that solemn harmony and order from which destiny and God draw their uses to mankind.

It was from this irresolute contest between antagonist principles that Maltravers was aroused by the following letter from Florence Lascelles:

"For three days and three sleepless nights I have debated with myself whether or not I ought to address you. Oh, Ernest, were I what I was, in health, in pride, I might fear that, generous as you are, you would misconstrue my appeal; but that is now impossible. Our union never can take place, and my hopes bound themselves to one sweet and melancholy hope, that you will remove from my last hours the cold and dark shadow of your resentment. We have both been cruelly deceived and betrayed. Three days ago I discovered the perfidy that has been practised against us. And then, ah! then, with all the weak human anguish of discovering it too late (/your curse is fulfilled/, Ernest!), I had at least one moment of proud, of exquisite rapture. Ernest Maltravers, the hero of my dreams, stood pure and lofty as of old—a thing it was not unworthy to love, to mourn, to die for. A letter in your handwriting had been shown to me, garbled and altered, as it seems—but I detected not the imposture—it was yourself, yourself alone, brought in false and horrible witness against yourself! And could you think that any other evidence, the words, the oaths of others, would have convicted you in my eyes? There you wronged me. But I deserved it—I had bound myself to secrecy—the seal is taken from my lips in order to be set upon my tomb. Ernest, beloved Ernest—beloved till the last breath is extinct—till the last throb of this heart is stilled—write me one word of comfort and of pardon. You will believe what I have imperfectly written, for you ever trusted my faith, if you have blamed my faults. I am now comparatively happy—a word from you will, make me blest. And Fate has, perhaps, been more merciful to both, than in our shortsighted and querulous human vision, we might, perhaps, believe; for now that the frame is brought low—and in the solitude of my chamber I can duly and humbly commune with mine own heart, I see the aspect of those faults which I once mistook for virtues—and feel that, had we been united, I, loving you ever, might not have constituted your happiness, and so have known the misery of losing your affection. May He who formed you for glorious and yet all unaccomplished purposes strengthen you, when these eyes can no longer sparkle at your triumphs, or weep at your lightest sorrow. You will go on in your broad and luminous career:—a few years, and my remembrance will have left but the vestige of a dream behind. But, but—I can write no more. God bless you!"