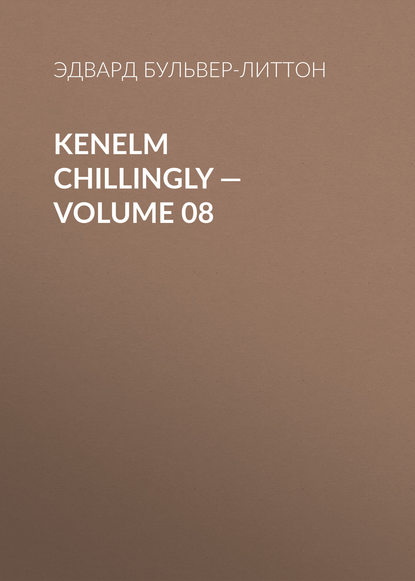 
"If I am to be designated a philosopher it is certainly not I. And, honestly speaking, I am not the same. I, who spent that pleasant day with you among the fields round Luscombe two years ago—"

"Or who advised me at Tor Hadham to string my lyre to the praise of a beefsteak. I, too, am not quite the same,—I, whose dog presented you with the begging-tray."

"Yet you still go through the world singing."

"Even that vagrant singing time is pretty well over. But I disturbed you from your repose; I would rather share it. You are probably not going my way, and as I am in no hurry, I should not like to lose the opportunity chance has so happily given me of renewing acquaintance with one who has often been present to my thoughts since we last met." Thus saying, the minstrel stretched himself at ease on the bank, and Kenelm followed his example.

There certainly was a change in the owner of the dog with the begging-tray, a change in costume, in countenance, in that indescribable self-evidence which we call "manner." The costume was not that Bohemian attire in which Kenelm had first encountered the wandering minstrel, nor the studied, more graceful garb, which so well became his shapely form during his visit to Luscombe. It was now neatly simple, the cool and quiet summer dress any English gentleman might adopt in a long rural walk. And as he uncovered his head to court the cooling breeze, there was a graver dignity in the man's handsome Rubens-like face, a line of more concentrated thought in the spacious forehead, a thread or two of gray shimmering here and there through the thick auburn curls of hair and beard. And in his manner, though still very frank, there was just perceptible a sort of self-assertion, not offensive, but manly; such as does not misbecome one of maturer years, and of some established position, addressing another man much younger than himself, who in all probability has achieved no position at all beyond that which the accident of birth might assign to him.

"Yes," said the minstrel, with a half-suppressed sigh, "the last year of my vagrant holidays has come to its close. I recollect that the first day we met by the road-side fountain, I advised you to do like me, seek amusement and adventure as a foot-traveller. Now, seeing you, evidently a gentleman by education and birth, still a foot-traveller, I feel as if I ought to say, 'You have had enough of such experience: vagabond life has its perils as well as charms; cease it, and settle down.'"

"I think of doing so," replied Kenelm, laconically.

"In a profession?—army, law, medicine?"

"Ah, in marriage then. Right; give me your hand on that. So a petticoat indeed has at last found its charm for you in the actual world as well as on the canvas of a picture?"

"I conclude," said Kenelm, evading any direct notice of that playful taunt, "I conclude from your remark that it is in marriage /you/ are about to settle down."

"Ay, could I have done so before I should have been saved from many errors, and been many years nearer to the goal which dazzled my sight through the haze of my boyish dreams."

"What is that goal,—the grave?"

"The grave! That which allows of no grave,—fame."

"I see—despite of what you just now said—you still mean to go through the world seeking a poet's fame."

"Alas! I resign that fancy," said the minstrel, with another half-sigh. "It was not indeed wholly, but in great part the hope of the poet's fame that made me a truant in the way to that which destiny, and such few gifts as Nature conceded to me, marked out for my proper and only goal. But what a strange, delusive Will-o'-the-Wisp the love of verse-making is! How rarely a man of good sense deceives himself as to other things for which he is fitted, in which he can succeed; but let him once drink into his being the charm of verse-making, how the glamour of the charm bewitches his understanding! how long it is before he can believe that the world will not take his word for it, when he cries out to sun, moon, and stars, 'I, too, am a poet.' And with what agonies, as if at the wrench of soul from life, he resigns himself at last to the conviction that whether he or the world be right, it comes to the same thing. Who can plead his cause before a court that will not give him a hearing?"

It was with an emotion so passionately strong, and so intensely painful, that the owner of the dog with the begging-tray thus spoke, that Kenelm felt, through sympathy, as if he himself were torn asunder by the wrench of life from soul. But then Kenelm was a mortal so eccentric that, if a single acute suffering endured by a fellow mortal could be brought before the evidence of his senses, I doubt whether he would not have suffered as much as that fellow-mortal. So that, though if there were a thing in the world which Kenelm Chillingly would care not to do, it was verse-making, his mind involuntarily hastened to the arguments by which he could best mitigate the pang of the verse-maker.

Quoth he: "According to my very scanty reading, you share the love of verse-making with men the most illustrious in careers which have achieved the goal of fame. It must, then, be a very noble love: Augustus, Pollio, Varius, Maecenas,—the greatest statesmen of their day,—they were verse-makers. Cardinal Richelieu was a verse-maker; Walter Raleigh and Philip Sidney, Fox, Burke, Sheridan, Warren Hastings, Canning, even the grave William Pitt,—all were verse-makers. Verse-making did not retard—no doubt the qualities essential to verse-making accelerated—their race to the goal of fame. What great painters have been verse-makers! Michael Angelo, Leonardo da Vinci, Salvator Rosa"—and Heaven knows how may other great names Kenelm Chillingly might have proceeded to add to his list, if the minstrel had not here interposed.

"What! all those mighty painters were verse-makers?"

"Verse-makers so good, especially Michael Angelo,—the greatest painter of all,—that they would have had the fame of poets, if, unfortunately for that goal of fame, their glory in the sister art of painting did not outshine it. But when you give to your gift of song the modest title of verse-making, permit me to observe that your gift is perfectly distinct from that of the verse-maker. Your gift, whatever it may be, could not exist without some sympathy with the non verse-making human heart. No doubt in your foot travels, you have acquired not only observant intimacy with external Nature in the shifting hues at each hour of a distant mountain, in the lengthening shadows which yon sunset casts on the waters at our feet, in the habits of the thrush dropped fearlessly close beside me, in that turf moistened by its neighbourhood to those dripping rushes, all of which I could describe no less accurately than you,—as a Peter Bell might describe them no less accurately than a William Wordsworth. But in such songs of yours as you have permitted me to hear, you seem to have escaped out of that elementary accidence of the poet's art, and to touch, no matter how slightly, on the only lasting interest which the universal heart of man can have in the song of the poet; namely, in the sound which the poet's individual sympathy draws forth from the latent chords in that universal heart. As for what you call 'the world,' what is it more than the fashion of the present day? How far the judgment of that is worth a poet's pain I can't pretend to say. But of one thing I am sure, that while I could as easily square the circle as compose a simple couplet addressed to the heart of a simple audience with sufficient felicity to decoy their praises into Max's begging-tray, I could spin out by the yard the sort of verse-making which characterizes the fashion of the present day."

Much flattered, and not a little amused, the wandering minstrel turned his bright countenance, no longer dimmed by a cloud, towards that of his lazily reclined consoler, and answered gayly,—

"You say that you could spin out by the yard verses in the fashion of the present day. I wish you would give me a specimen of your skill in that handiwork."

"Very well; on one condition, that you will repay my trouble by a specimen of your own verses, not in the fashion of the present day,—something which I can construe. I defy you to construe mine."

"Well, then, let us take it for granted that this is the Augustan age of English poetry, and that the English language is dead, like the Latin. Suppose I am writing for a prize-medal in English, as I wrote at college for a prize-medal in Latin: of course, I shall be successful in proportion as I introduce the verbal elegances peculiar to our Augustan age, and also catch the prevailing poetic characteristic of that classical epoch.