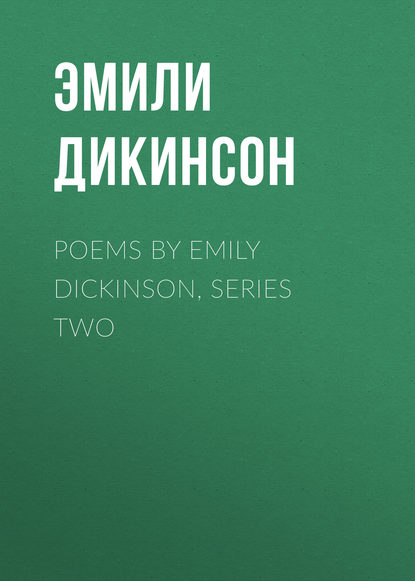 The eagerness with which the first volume of Emily Dickinson's poems has been read shows very clearly that all our alleged modern artificiality does not prevent a prompt appreciation of the qualities of directness and simplicity in approaching the greatest themes,—life and love and death. That "irresistible needle-touch," as one of her best critics has called it, piercing at once the very core of a thought, has found a response as wide and sympathetic as it has been unexpected even to those who knew best her compelling power. This second volume, while open to the same criticism as to form with its predecessor, shows also the same shining beauties.

Although Emily Dickinson had been in the habit of sending occasional poems to friends and correspondents, the full extent of her writing was by no means imagined by them. Her friend "H.H." must at least have suspected it, for in a letter dated 5th September, 1884, she wrote:—

MY DEAR FRIEND,– What portfolios full of verses you must have! It is a cruel wrong to your "day and generation" that you will not give them light.

If such a thing should happen as that I should outlive you, I wish you would make me your literary legatee and executor. Surely after you are what is called "dead" you will be willing that the poor ghosts you have left behind should be cheered and pleased by your verses, will you not? You ought to be. I do not think we have a right to withhold from the world a word or a thought any more than a deed which might help a single soul. . . .

The "portfolios" were found, shortly after Emily Dickinson's death, by her sister and only surviving housemate. Most of the poems had been carefully copied on sheets of note-paper, and tied in little fascicules, each of six or eight sheets. While many of them bear evidence of having been thrown off at white heat, still more had received thoughtful revision. There is the frequent addition of rather perplexing foot-notes, affording large choice of words and phrases. And in the copies which she sent to friends, sometimes one form, sometimes another, is found to have been used. Without important exception, her friends have generously placed at the disposal of the Editors any poems they had received from her; and these have given the obvious advantage of comparison among several renderings of the same verse.

To what further rigorous pruning her verses would have been subjected had she published them herself, we cannot know. They should be regarded in many cases as merely the first strong and suggestive sketches of an artist, intended to be embodied at some time in the finished picture.

Emily Dickinson appears to have written her first poems in the winter of 1862. In a letter to one of the present Editors the April following, she says, "I made no verse, but one or two, until this winter."

The handwriting was at first somewhat like the delicate, running Italian hand of our elder gentlewomen; but as she advanced in breadth of thought, it grew bolder and more abrupt, until in her latest years each letter stood distinct and separate from its fellows. In most of her poems, particularly the later ones, everything by way of punctuation was discarded, except numerous dashes; and all important words began with capitals. The effect of a page of her more recent manuscript is exceedingly quaint and strong. The fac-simile given in the present volume is from one of the earlier transition periods. Although there is nowhere a date, the handwriting makes it possible to arrange the poems with general chronologic accuracy.

As a rule, the verses were without titles; but "A Country Burial," "A Thunder-Storm," "The Humming-Bird," and a few others were named by their author, frequently at the end,—sometimes only in the accompanying note, if sent to a friend.

The variation of readings, with the fact that she often wrote in pencil and not always clearly, have at times thrown a good deal of responsibility upon her Editors. But all interference not absolutely inevitable has been avoided. The very roughness of her rendering is part of herself, and not lightly to be touched; for it seems in many cases that she intentionally avoided the smoother and more usual rhymes.

Like impressionist pictures, or Wagner's rugged music, the very absence of conventional form challenges attention. In Emily Dickinson's exacting hands, the especial, intrinsic fitness of a particular order of words might not be sacrificed to anything virtually extrinsic; and her verses all show a strange cadence of inner rhythmical music. Lines are always daringly constructed, and the "thought-rhyme" appears frequently,—appealing, indeed, to an unrecognized sense more elusive than hearing.

Emily Dickinson scrutinized everything with clear-eyed frankness. Every subject was proper ground for legitimate study, even the sombre facts of death and burial, and the unknown life beyond. She touches these themes sometimes lightly, sometimes almost humorously, more often with weird and peculiar power; but she is never by any chance frivolous or trivial. And while, as one critic has said, she may exhibit toward God "an Emersonian self-possession," it was because she looked upon all life with a candor as unprejudiced as it is rare.

She had tried society and the world, and found them lacking. She was not an invalid, and she lived in seclusion from no love-disappointment. Her life was the normal blossoming of a nature introspective to a high degree, whose best thought could not exist in pretence.

Storm, wind, the wild March sky, sunsets and dawns; the birds and bees, butterflies and flowers of her garden, with a few trusted human friends, were sufficient companionship. The coming of the first robin was a jubilee beyond crowning of monarch or birthday of pope; the first red leaf hurrying through "the altered air," an epoch. Immortality was close about her; and while never morbid or melancholy, she lived in its presence.

My nosegays are for captives;
Dim, long-expectant eyes,
Fingers denied the plucking,
Patient till paradise,

To such, if they should whisper
Of morning and the moor,
They bear no other errand,
And I, no other prayer.

How dreary to be somebody!
How public, like a frog
To tell your name the livelong day
To an admiring bog!

I bring an unaccustomed wine
To lips long parching, next to mine,
And summon them to drink.

Crackling with fever, they essay;
I turn my brimming eyes away,
And come next hour to look.

The hands still hug the tardy glass;
The lips I would have cooled, alas!
Are so superfluous cold,

I would as soon attempt to warm
The bosoms where the frost has lain
Ages beneath the mould.

Some other thirsty there may be
To whom this would have pointed me
Had it remained to speak.

And so I always bear the cup
If, haply, mine may be the drop
Some pilgrim thirst to slake, —