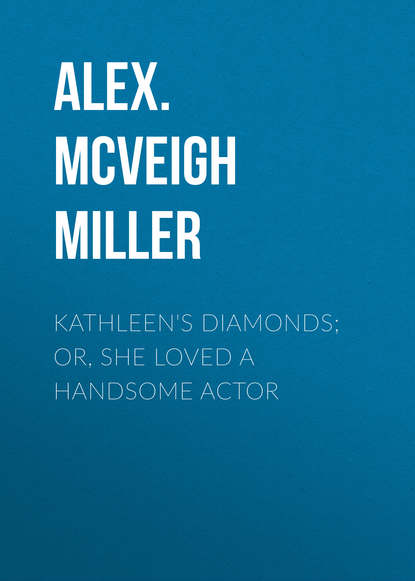 Kathleen's Diamonds; or, She Loved a Handsome Actor

What is the matter? Oh, nothing—a girl
Is found here in suicide rest.
Romantic? Of course; here's a rich, dark curl
On the beautiful, blue-veined breast.

Alas, it was too true!

She was dead by her own hand, the beautiful child-wife of Vincent Carew, the millionaire—dead in her youth and beauty, leaving behind her all that life held for a worshipped wife and loving mother; for upstairs at this moment in the silken nursery her child, the baby Kathleen, barely six months old, lay sweetly sleeping, watched by an attentive French bonne, while in the darkened parlor below, the girlish mother, not yet eighteen, lay pale and beautiful in her coffin, with white flowers blooming on the pulseless breast, hiding the crimson stain where the slight jeweled dagger from her hair had sheathed itself in her tortured heart.

She was so young, so ignorant, or surely she would have held back her suicidal hand—she would have taken pity on her child, the dark-eyed little heiress she was leaving motherless in the wide, wide world that, whatever else it may give us, can not make up for the loss of the best thing life has to offer—a mother's love!

It is always a terrible misfortune to a young girl to be motherless, and it was going to be the tragedy of Kathleen Carew's life that she had no mother. The dagger-thrust that let out the life-blood of unhappy Zaidee Carew turned the whole course of her daughter's life aside into different channels.

But that lay in the future. Now all Boston wondered over the tragic death of Vincent Carew's wife, and people asked each other in dismay:

No one could answer that question.

The world thought that the young wife was perfectly happy.

And why not? Surely she had good cause.

Vincent Carew, the rich bachelor, who was a power in politics, and aspired to be governor of his state, had married Zaidee Franklyn out of a poverty-stricken home, lifting her at a bound to rank and fortune, and all for love of her fair face.

He had snapped his white fingers in the face of the world that called his marriage a mésalliance, and carried everything by storm. For his sake, society—cultured Boston society—had received his wife, the lovely young Southern girl, with her shy ways and neglected education, and for a time all went well.

So no one could answer the question why did she kill herself, but that was because Vincent Carew was too proud to admit the ubiquitous reporter inside his aristocratic portals. If one of these curious mortals had secured admittance to the house and questioned the servants, they would have told him what they suspected and discussed in whispers among themselves—that madame was madly jealous of the teacher her husband had employed to finish her very imperfect education.

"She is a snake in the grass, that pretty widow, and she makes my mistress unhappy," said the housekeeper, the first month that Mrs. Belmont came, and her opinion was adopted by all the other servants. They all hated the stately young widow in her black garments, and when the grewsome tragedy of Mrs. Carew's death darkened the sunlight in that luxurious home, they whispered to each other that it was Mrs. Belmont who had worked their mistress such bitter woe that she could not bear her life.

If indeed she had schemed for anything like this, Mrs. Belmont had succeeded in her designs. Zaidee Carew, with her own dimpled, white hand, had cut the Gordian knot of life, and in a few more days a stately funeral cortège moved away from Vincent Carew's doors to the cemetery where his dead wife, in all her youthful beauty, was laid to rest beneath the grass and flowers.

An exquisite face—patrician in style;
Note the lashes, how black, and their sweep—
The arch of the brows, and the proud lip's smile,
The flash of the eyes dark and deep.

Away from the forehead in waves the hair
Flows with the glisten of bronze;
Glorious in volume, the frame from where
The face of an houri dawns.

"I never saw such a forgetful girl as you, Kathleen Carew. Here you sit dreaming, instead of dressing for 'Prince Karl' to-night. Are you going to the theater, then, or not?"

"Of course I am going, Alpine. I did not know it was so late. What, you are dressed already? How sweet you look! That blue crêpe de Chine is awfully becoming to you. Well, then, please ring the bell for my maid, won't you? I'll be ready in ten minutes."

"You'd better. Mamma will be furious if you keep her waiting," Alpine Belmont answered, crossly, as she touched the bell.

Then she looked back curiously at the graceful, indolent figure in the easy-chair, leaning back with white hands clasped on top of the bronze-gold head.

"Kathleen, what were you thinking about so intently when I came in? I had to speak twice before you heard me."

"Alpine, I was thinking of that handsome young man who saved my life at Newport last summer. I was wondering who he was, and if we should ever see him again."

"It isn't likely we ever will," answered Alpine Belmont, carelessly. "I don't suppose he's in our set at all—some poor clerk spending all his winter's savings on a short summer outing, very likely. I wouldn't be thinking about him, like a romantic school-girl, if I were you, Kathleen. He didn't care about you, or he would have made himself known to you before this," and, with a low, taunting laugh, Alpine Belmont left the room just as Susette, the maid, came in.

"You'll have to do my hair in a hurry, Susie. There's no time for prinking," laughed her mistress; and while the maid brushed out the magnificent, rippling tresses, Kathleen relapsed into thoughts of the unknown hero whose handsome image haunted her thoughts.

"Is it true, as Alpine says, that he did not care for me? It is strange he did not stay to inquire who I was, after I came so near drowning. If he was a poor young clerk, as Alpine believes, perhaps he was too proud to reveal himself, thinking I would scorn him because I was an heiress. Ah, how little he knew Kathleen Carew's heart!"

Her thoughts ran thrillingly on:

"Oh, how handsome he was when I first saw him in the water, that day at Newport! He kept watching me, and I could not help looking back. He seemed to draw my eyes. I know I wanted him to like me, for I wondered if my bathing suit was becoming, and I felt glad my hair was down, because I had been told it looked pretty that way, all wet and curling over my shoulders. His brown eyes said as plain as words that he admired me. Other men did, too, I know, but this time it seemed to thrill me with a new pleasure. As I splashed about like a mermaid in the waves, I kept thinking of him, wondering who he was, and hoping he would be at the ball that night. I wanted him to see how well I looked in my white lace and pearls. Then all at once came that treacherous undertow that swept me from my feet, down, down, down, under the heavy waves. Oh, how horrible it was! I thought I would be drowned, and my last thought was–"

"Anything, Susette. It don't matter how I look to-night. You can't decide? Oh, well, that new white cloth with the pink ostrich feather trimming, and diamonds. Alpine is wearing pearls and a blue gown, and we don't want to be dressed alike."

While Susette fastened the exquisite gown and clasped the diamonds, her thoughts ran on:

"He rescued me, the handsome, brave fellow, and as soon as he laid me, limp, but faintly conscious, upon the sands, he walked hastily away, and no one at Newport ever saw him again. Neither could any one ever find out who he was, although I'm afraid mamma did not try very hard. But he was certainly very modest. He did not want us to make a hero of him. Heigho, I do wish I knew his name—I do wish I could see him again! Alpine says I am foolish and romantic, and that I fell in love with him because he saved my life. Indeed, I think it was before—yes, at the very moment I first met his beautiful brown eyes gazing so eagerly into mine. A quick electric thrill seemed to dart through me, and–"

"Kathleen, aren't you ready yet?" asked Alpine, entering. "The carriage has been waiting ever so long, and mamma is getting furious over your delay."

"I'm ready," Kathleen answered, composedly, without hurrying the least bit. She drew her white opera-cloak leisurely about her ivory-white shoulders, and followed her step-sister down-stairs to where Vincent Carew's second wife, once the widow Belmont, poor Zaidee's governess, was waiting in impotent wrath at the detention.