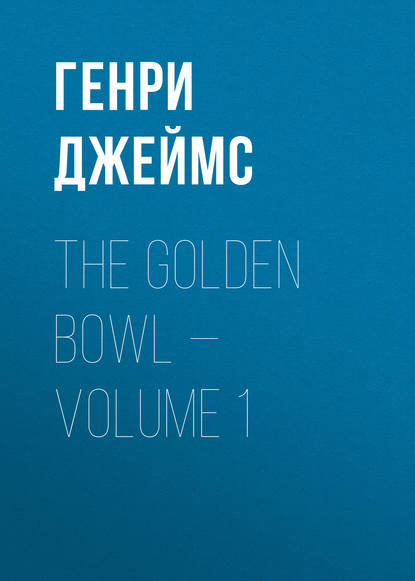 
But his wife, as it was a point she had often made, could go on as she had gone on before. "You're perfectly indifferent, really; you're perfectly immoral. You've taken part in the sack of cities, and I'm sure you've done dreadful things yourself. But I DON'T trouble my head, if you like. 'So now there!'" she laughed.

He accepted her laugh, but he kept his way. "Well, I back poorCharlotte."

"To know what she wants."

"Ah then, so do I. She does know what she wants." And Mrs. Assingham produced this quantity, at last, on the girl's behalf, as the ripe result of her late wanderings and musings. She had groped through their talk, for the thread, and now she had got it. "She wants to be magnificent."

"She is," said the Colonel almost cynically.

"She wants"—his wife now had it fast "to be thoroughly superior, and she's capable of that."

"Of carrying out her idea."

"To see Maggie through."

Bob Assingham wondered. "Through what?"

"Through everything. She KNOWS the Prince."

"So that Charlotte has come out to give her lessons?"

She continued, Fanny Assingham, to work out her thought. "She has done this great thing for him. That is, a year ago, she practically did it. She practically, at any rate, helped him to do it himself—and helped me to help him. She kept off, she stayed away, she left him free; and what, moreover, were her silences to Maggie but a direct aid to him? If she had spoken in Florence; if she had told her own poor story; if she had, come back at any time—till within a few weeks ago; if she hadn't gone to New York and hadn't held out there: if she hadn't done these things all that has happened since would certainly have been different. Therefore she's in a position to be consistent now. She knows the Prince," Mrs. Assingham repeated. It involved even again her former recognition. "And Maggie, dear thing, doesn't."

She was high, she was lucid, she was almost inspired; and it was but the deeper drop therefore to her husband's flat common sense. "In other words Maggie is, by her ignorance, in danger? Then if she's in danger, there IS danger."

"There WON'T be—with Charlotte's understanding of it. That's where she has had her conception of being able to be heroic, of being able in fact to be sublime. She is, she will be"—the good lady by this time glowed. "So she sees it—to become, for her best friend, an element of POSITIVE safety."

Bob Assingham looked at it hard. "Which of them do you call her best friend?"

She gave a toss of impatience. "I'll leave you to discover!" But the grand truth thus made out she had now completely adopted. "It's for US, therefore, to be hers."

"Through her noble, lonely life. Only—that's essential—it mustn't be lonely. It will be all right if she marries."

"We're to marry her. It will be," Mrs. Assingham continued, "the great thing I can do." She made it out more and more. "It will make up."

"Make up for what?" As she said nothing, however, his desire for lucidity renewed itself. "If everything's so all right what is there to make up for?"

"You'll make up for it by making another?" And then as she again took her time: "I thought your whole point is just that you're sure."

"One can never be ideally sure of anything. There are always possibilities."

"Then, if we can but strike so wild, why keep meddling?"

It made her again look at him. "Where would you have been, my dear, if I hadn't meddled with YOU?"

"Ah, that wasn't meddling—I was your own. I was your own," said the Colonel, "from the moment I didn't object."

"Well, these people won't object. They are my own too—in the sense that I'm awfully fond of them. Also in the sense," she continued, "that I think they're not so very much less fond of me. Our relation, all round, exists—it's a reality, and a very good one; we're mixed up, so to speak, and it's too late to change it. We must live IN it and with it. Therefore to see that Charlotte gets a good husband as soon as possible—that, as I say, will be one of my ways of living. It will cover," she said with conviction, "all the ground." And then as his own conviction appeared to continue as little to match: "The ground, I mean, of any nervousness I may ever feel. It will be in fact my duty and I shan't rest till my duty's performed." She had arrived by this time at something like exaltation. "I shall give, for the next year or two if necessary, my life to it. I shall have done in that case what I can."

He took it at last as it came. "You hold there's no limit to what you 'can'?"

"I don't say there's no limit, or anything of the sort. I say there are good chances—enough of them for hope. Why shouldn't there be when a girl is, after all, all that she is?"

"By after 'all' you mean after she's in love with somebody else?"

The Colonel put his question with a quietude doubtless designed to be fatal; but it scarcely pulled her up. "She's not too much in love not herself to want to marry. She would now particularly like to."

"Not yet. It's too soon. But she will. Meanwhile, however, I don't require the information. Her marrying will prove the truth."

"The truth of everything I say."

"Well, to myself, to begin with. That will be enough for me—to work for her. What it will prove," Mrs. Assingham presently went on, "will be that she's cured. That she accepts the situation."

He paid this the tribute of a long pull at his pipe. "The situation of doing the one thing she can that will really seem to cover her tracks?"

His wife looked at him, the good dry man, as if now at last he was merely vulgar. "The one thing she can do that will really make new tracks altogether. The thing that, before any other, will be wise and right. The thing that will best give her her chance to be magnificent."

He slowly emitted his smoke. "And best give you, by the same token, yours to be magnificent with her?"

"I shall be as magnificent, at least, as I can."

Bob Assingham got up. "And you call ME immoral?"

She hesitated. "I'll call you stupid if you prefer. But stupidity pushed to a certain point IS, you know, immorality. Just so what is morality but high intelligence?" This he was unable to tell her; which left her more definitely to conclude. "Besides, it's all, at the worst, great fun."