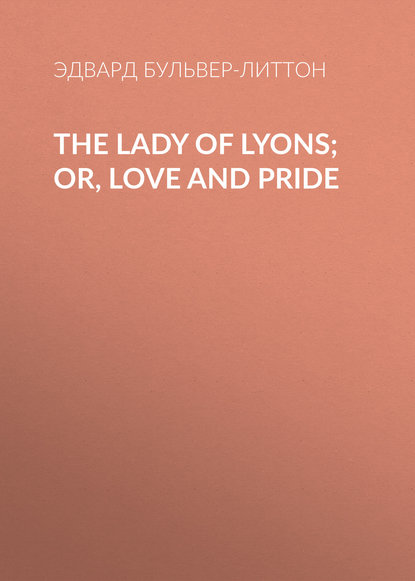 
Gaspar. Thou wilt be proud to hear how thy messenger was honored. For thy sake, Melnotte, I have borne that which no Frenchman can bear without disgrace.

Gaspar. I gave thy letter to the porter, who passed it from lackey to lackey till it reached the lady it was meant for.

Gaspar. It reached her, and was returned to me with blows. Dost hear, Melnotte? with blows! Death! are we slaves still, that we are to be thus dealt with, we peasants?

Gaspar. I could show thee the marks if it were not so deep a shame to bear them. The lackey who tossed thy letter into the mire swore that his lady and her mother never were so insulted. What could thy letter contain, Claude?

Mel. [looking over the letter]. Not a line that a serf might not have written to an empress. No, not one.

Gaspar. They promise thee the same greeting they gave me, if thou wilt pass that way. Shall we endure this, Claude?

Mel. [wringing GASPAR’s hand]. Forgive me, the fault was mine, I have brought this on thee; I will not forget it; thou shalt be avenged! The heartless insolence!

Gaspar. Thou art moved, Melnotte; think not of me; I would go through fire and water to serve thee; but,—a blow! It is not the bruise that galls,—it is the blush, Melnotte.

Gaspar. Did you not write to Pauline Deschappelles, the daughter of the rich merchant?

Gaspar. And are you not a peasant—a gardener’s son?—that was the offence. Sleep on it, Melnotte. Blows to a French citizen, blows! [Exit.

Widow. Now you are cured, Claude!

Mel. tearing the letter. So do I scatter her image to the winds—I will stop her in the open streets—I will insult her—I will beat her menial ruffians—I will—[Turns suddenly to Widow.] Mother, am I humpbacked—deformed—hideous? Widow. You!

Mel. Or a dull fool—a vain, drivelling, brainless idiot? Widow. No, no. Mel. What am I then—worse than all these? Why, I am a peasant! What has a peasant to do with love? Vain revolutions, why lavish your cruelty on the great? Oh that we—we, the hewers of wood and drawers of water—had been swept away, so that the proud might learn what the world would be without us! [Knock at the door.

Enter Servant from the Inn.

Servant. A letter for Citizen Melnotte.

Mel. A letter! from her perhaps—who sent thee?

Servant. Why, Monsieur—I mean Citizen—Beauseant, who stops to dine at the Golden Lion, on his way to his chateau.

“Young man, I know thy secret—thou lovest above thy station: if thou hast wit, courage, and discretion, I can secure to thee the realization of thy most sanguine hopes; and the sole condition I ask in return is, that thou shalt be steadfast to thine own ends. I shall demand from thee a solemn oath to marry her whom thou lovest; to bear her to thine home on thy wedding night. I am serious—if thou wouldst learn more, lose not a moment, but follow the bearer of this letter to thy friend and patron,—CHARLES BEAUSEANT.”