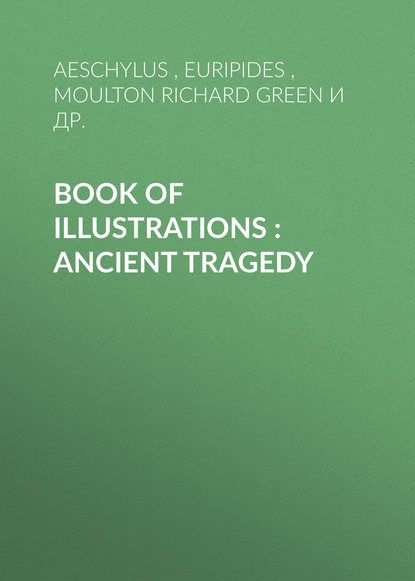 In the case of Aeschylus and Sophocles the numbering of lines agrees with that in the translations of Plumptre and in the original. In the plays from Euripides the numbering is that of the lines in the cheap translation (Routledge's Universal Library).

[Transcriber's note: In the original book, the line numbers mentioned above were right-justified. In this e-book, they are enclosed in curly braces, and placed immediately after their associated line of text, e.g. ".. a line of text {123}".]

The passages quoted are from Plumptre's Translation

The Sacred Legends touched by this Trilogy would be familiar, in outline, to the Auditors: e. g.:

The woes of the House of Atreus: the foundation of them laid by Atreus when, to take vengeance on his brother Thyestes, he served up to him at a banquet the flesh of his own sons;

His grandsons were Agamemnon and Menelaus: Menelaus' wife, Helen, was stolen by a guest, Paris of Troy, which caused the great Trojan war.

Agamemnon, who commanded the Greek nations in that war, fretting at the contrary winds which delayed the setting out of the fleet, was persuaded by the Seers to slay his own daughter Iphigenia, to appease the Deities;

Her mother Clytaemnestra treasured up this wrong all through the ten years' war, and slew Agamemnon on his return, in the moment of victory, slew him while in his bath by casting a net over him and smiting him to death with her own arm;

Then she reigned in triumph with Aegisthus her paramour (himself one of the fatal house), till Orestes her son, who had escaped as an infant when his father was slaughtered, returned at last, and slew the guilty pair;

For this act of matricide, though done by the command of Apollo, Orestes was given up to the Furies, and driven over the earth, a madman, till in Athens, on Mars' Hill they say, he was cleansed and healed.

Cassandra too was involved in the fall of Agamemnon: the Trojan maiden beloved of Apollo, who bestowed upon her the gift of prophecy; when she slighted the God's love, Apollo – for no gift of a god can be recalled – left her a prophetess, with the doom that her true forebodings should ever be disbelieved. She, having thus vainly sought to save Troy, with its fall fell into captivity, and to the lot of Agamemnon, with whom she died.

The name of Orestes would suggest the proverbial friendship of Qrestes [Transcriber's note: Orestes?] and Pylades, formed in Orestes' trouble and never broken.

TRILOGY OF THE ORESTEIA

FIRST PLAY: IN THE MORNING:

The Permanent Scene is decorated to represent the facade of the Palace of Agamemnon, at Argos; the platform over the Central door appearing as a Watch-tower. At intervals along the front of the Palace, and especially by the three doors, are statues of Gods, amongst them Apollo, Zeus, and Hermes. The time is supposed to be night, verging on morning. Both Orchestra and Stage are vacant: only a Watchman is discovered on the Tower, leaning on his elbow, and gazing into the distance.

The Watchman soliloquizes on his toilsome task of watching all night through for the first sight of the signal which is to tell of the capture of Troy: he has kept his post for years, till the constellations which usher in winter and harvest-time are his familiar companions; he must endure weather and sleeplessness, and when he would sing to keep his spirits up he is checked by thoughts of his absent master's household, in which, he darkly hints, things are "not well." [He is settling himself into an easier posture, when suddenly he springs to his feet.] The beacon-fire at last! [He shouts the signal agreed upon, and begins dancing for joy.] Now all will be well; a little while and his hand shall touch the dear hand of his lord; and then – ah! "the weight of an ox rests on his tongue," but if the house had a voice it could tell a tale! [Exit to bring tidings to the queen.] {39}

As if roused by the Watchman's shout, enter the Chorus: Twelve Elders of Argos: in the usual processional order, combining music, chanting and gesture-dance, to a rhythm conventionally associated with marching. They enter on the right (as if from the city), and the Processional Chant takes them gradually round the Orchestra towards the Thymele, or Altar of Dionysus, in the centre.

The Chorus in their Processional Chant open the general state of affairs, especially bringing out the doublesidedness of the situation [which is the key-note of the whole Drama]: the expected triumph over Troy, which cannot be far distant now, combined with misgivings as to misfortunes sure to come as nemesis for the dark deeds connected with the setting out of the expedition. They open thus:

Lo! the tenth year now is passing {40}
Since, of Priam great avengers,
Menelaos, Agamemnon,
Double-throned and double-sceptred,
Power from sovran Zeus deriving —
Mighty pair of the Atreidae —
Raised a fleet of thousand vessels
Of the Argives from our country,
Potent helpers in their warfare,
Shouting cry of Ares fiercely;
E'en as vultures shriek who hover,
Wheeling, whirling o'er their eyrie, {50}
In wild sorrow for their nestlings,
With their oars of stout wings rowing,
Having lost the toil that bound them
To their callow fledglings' couches.
But on high One – or Apollo,
Zeus, or Pan, – the shrill cry hearing,
Cry of birds that are his clients,
Sendeth forth on men transgressing
Erinnys, slow but sure avenger;
So against young Alexandros
Atreus' sons the Great King sendeth,
Zeus, of host and guest protector: {60}
He, for bride with many a lover,
Will to Danai give and Troïans
Many conflicts, men's limbs straining,
When the knee in dust is crouching,
And the spear-shaft in the onset
Of the battle snaps asunder.
But as things are now, so are they,
So, as destined, shall the end be.
Nor by tears nor yet libations
Shall he soothe the wrath unbending {70}
Caused by sacred rites left fireless.

They are going on to soliloquize how they themselves have been shut out of the glorious expedition, for, in matters of War, old age is but a return to boyhood; when {82}

The Chorus-Procession having reached the Thymele, turn towards the Stage. Meanwhile the great Central Door of the Stage has opened, and a solemn Procession filed out on the Stage, consisting of the Queen and her Attendants, bearing torches and incense, and offerings for the Gods; they have during the Choral Procession silently advanced to the different Statues along the front of the Palace, made offerings and commenced the sacrificial riles. When the Chorus turn towards the Stage, the whole Scene is ablaze with fires and trembling with clouds of incense, rich unguents perfume the whole Theatre, while a solemn Religious ritual is being celebrated in dumb show.

The Chorus break off their Processional Chant [keeping the same rhythm] to enquire what is the meaning of these solemn rites, and whether the Queen can solve their doubt, which wavers between hope and foreboding: