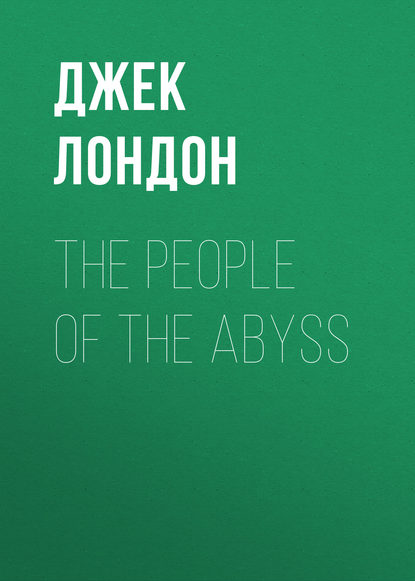 Джек Лондон
The People of the Abyss

The People of the Abyss
Джек Лондон

The People of the Abyss

The chief priests and rulers cry: -

“O Lord and Master, not ours the guilt,
We build but as our fathers built;
Behold thine images how they stand
Sovereign and sole through all our land.

“Our task is hard – with sword and flame,
To hold thine earth forever the same,
And with sharp crooks of steel to keep,
Still as thou leftest them, thy sheep.”

Then Christ sought out an artisan,
A low-browed, stunted, haggard man,
And a motherless girl whose fingers thin
Crushed from her faintly want and sin.

These set he in the midst of them,
And as they drew back their garment hem
For fear of defilement, “Lo, here,” said he,
“The images ye have made of me.”

The experiences related in this volume fell to me in the summer of 1902. I went down into the under-world of London with an attitude of mind which I may best liken to that of the explorer. I was open to be convinced by the evidence of my eyes, rather than by the teachings of those who had not seen, or by the words of those who had seen and gone before. Further, I took with me certain simple criteria with which to measure the life of the under-world. That which made for more life, for physical and spiritual health, was good; that which made for less life, which hurt, and dwarfed, and distorted life, was bad.

It will be readily apparent to the reader that I saw much that was bad. Yet it must not be forgotten that the time of which I write was considered “good times” in England. The starvation and lack of shelter I encountered constituted a chronic condition of misery which is never wiped out, even in the periods of greatest prosperity.

Following the summer in question came a hard winter. Great numbers of the unemployed formed into processions, as many as a dozen at a time, and daily marched through the streets of London crying for bread. Mr. Justin McCarthy, writing in the month of January 1903, to the New York Independent, briefly epitomises the situation as follows: -

“The workhouses have no space left in which to pack the starving crowds who are craving every day and night at their doors for food and shelter. All the charitable institutions have exhausted their means in trying to raise supplies of food for the famishing residents of the garrets and cellars of London lanes and alleys. The quarters of the Salvation Army in various parts of London are nightly besieged by hosts of the unemployed and the hungry for whom neither shelter nor the means of sustenance can be provided.”

It has been urged that the criticism I have passed on things as they are in England is too pessimistic. I must say, in extenuation, that of optimists I am the most optimistic. But I measure manhood less by political aggregations than by individuals. Society grows, while political machines rack to pieces and become “scrap.” For the English, so far as manhood and womanhood and health and happiness go, I see a broad and smiling future. But for a great deal of the political machinery, which at present mismanages for them, I see nothing else than the scrap heap.

CHAPTER I – THE DESCENT

“But you can’t do it, you know,” friends said, to whom I applied for assistance in the matter of sinking myself down into the East End of London. “You had better see the police for a guide,” they added, on second thought, painfully endeavouring to adjust themselves to the psychological processes of a madman who had come to them with better credentials than brains.

“You don’t want to live down there!” everybody said, with disapprobation writ large upon their faces. “Why, it is said there are places where a man’s life isn’t worth tu’pence.”

“The very places I wish to see,” I broke in.

“But you can’t, you know,” was the unfailing rejoinder.

“Which is not what I came to see you about,” I answered brusquely, somewhat nettled by their incomprehension. “I am a stranger here, and I want you to tell me what you know of the East End, in order that I may have something to start on.”

“But we know nothing of the East End. It is over there, somewhere.” And they waved their hands vaguely in the direction where the sun on rare occasions may be seen to rise.

“Then I shall go to Cook’s,” I announced.

But O Cook, O Thomas Cook & Son, path-finders and trail-clearers, living sign-posts to all the world, and bestowers of first aid to bewildered travellers – unhesitatingly and instantly, with ease and celerity, could you send me to Darkest Africa or Innermost Thibet, but to the East End of London, barely a stone’s throw distant from Ludgate Circus, you know not the way!

“You can’t do it, you know,” said the human emporium of routes and fares at Cook’s Cheapside branch. “It is so – hem – so unusual.”

“Consult the police,” he concluded authoritatively, when I had persisted. “We are not accustomed to taking travellers to the East End; we receive no call to take them there, and we know nothing whatsoever about the place at all.”

“Never mind that,” I interposed, to save myself from being swept out of the office by his flood of negations. “Here’s something you can do for me. I wish you to understand in advance what I intend doing, so that in case of trouble you may be able to identify me.”

“Ah, I see! should you be murdered, we would be in position to identify the corpse.”

He said it so cheerfully and cold-bloodedly that on the instant I saw my stark and mutilated cadaver stretched upon a slab where cool waters trickle ceaselessly, and him I saw bending over and sadly and patiently identifying it as the body of the insane American who would see the East End.

“No, no,” I answered; “merely to identify me in case I get into a scrape with the ’bobbies.’” This last I said with a thrill; truly, I was gripping hold of the vernacular.

“That,” he said, “is a matter for the consideration of the Chief Office.”

“It is so unprecedented, you know,” he added apologetically.

The man at the Chief Office hemmed and hawed. “We make it a rule,” he explained, “to give no information concerning our clients.”

“But in this case,” I urged, “it is the client who requests you to give the information concerning himself.”

Again he hemmed and hawed.

“Of course,” I hastily anticipated, “I know it is unprecedented, but – ”

“As I was about to remark,” he went on steadily, “it is unprecedented, and I don’t think we can do anything for you.”

However, I departed with the address of a detective who lived in the East End, and took my way to the American consul-general. And here, at last, I found a man with whom I could “do business.” There was no hemming and hawing, no lifted brows, open incredulity, or blank amazement. In one minute I explained myself and my project, which he accepted as a matter of course. In the second minute he asked my age, height, and weight, and looked me over. And in the third minute, as we shook hands at parting, he said: “All right, Jack. I’ll remember you and keep track.”

I breathed a sigh of relief. Having burnt my ships behind me, I was now free to plunge into that human wilderness of which nobody seemed to know anything. But at once I encountered a new difficulty in the shape of my cabby, a grey-whiskered and eminently decorous personage who had imperturbably driven me for several hours about the “City.”

“Drive me down to the East End,” I ordered, taking my seat.