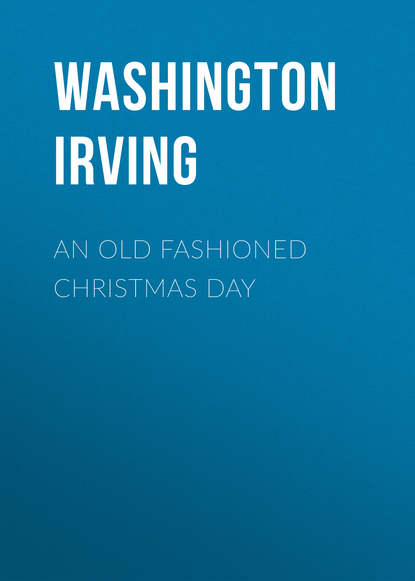 WHEN I awoke the next morning, it seemed as if all the events of the preceding evening had been a dream, and nothing but the identity of the ancient chamber convinced me of their reality. While I lay musing on my pillow, I heard the sound of little feet pattering outside of the door, and a whispering consultation. Presently a choir of small voices chanted forth an old Christmas carol, the burden of which was:

Rejoice, our Saviour He was born
On Christmas Day in the morning.

I rose softly, slipped on my clothes, opened the door suddenly, and beheld one of the most beautiful little fairy groups that a painter could imagine.

It consisted of a boy and two girls, the eldest not more than six, and lovely as seraphs. They were going the rounds of the house, and singing at every chamber door; but my sudden appearance frightened them into mute bashfulness. They remained for a moment playing on their lips with their fingers, and now and then stealing a shy glance from under their eyebrows, until, as if by one impulse, they scampered away, and as they turned an angle of the gallery, I heard them laughing in triumph at their escape.

The house was surrounded with evergreens, according to the English custom, which would have given almost an appearance of summer; but the morning was extremely frosty; the light vapour of the preceding evening had been precipitated by the cold, and covered all the trees and every blade of grass with its fine crystallisations.

I had scarcely dressed myself, when a servant appeared to invite me to family prayers. He showed me the way to a small chapel in the old wing of the house, where I found the principal part of the family already assembled in a kind of gallery, furnished with cushions, hassocks, and large prayer-books; the servants were seated on benches below. The old gentleman read prayers from a desk in front of the gallery, and Master Simon acted as clerk, and made the responses.

The service was followed by a Christmas carol, which Mr. Bracebridge himself had constructed from a poem of his favourite author, Herrick; and it had been adapted to an old church melody by Master Simon. As there were several good voices among the household, the effect was extremely pleasing; but I was particularly gratified by the exaltation of heart, and sudden sally of grateful feeling, with which the worthy Squire delivered one stanza: his eyes glistening, and his voice rambling out of all the bounds of time and tune:

’Tis thou that crown’st my glittering hearth
With guiltlesse mirth,
And giv’st me wassaile bowles to drink,
Spiced to the brink:
Lord, ’tis Thy plenty-dropping hand,
That soiles my land;
And giv’st me for my bushell sowne,
Twice ten for one.

Our breakfast consisted of what the Squire denominated true old English fare. He indulged in some bitter lamentations over modern breakfasts of tea and toast, which he censured as among the causes of modern effeminacy and weak nerves, and the decline of old English heartiness; and though he admitted them to his table to suit the palates of his guests, yet there was a brave display of cold meats, wine, and ale, on the sideboard.

After breakfast I walked about the grounds with Frank Bracebridge and Master Simon. We were escorted by a number of gentlemanlike dogs, that seemed loungers about the establishment; from the frisking spaniel to the steady old staghound; the last of which was of a race that had been in the family time out of mind.

The old mansion had a still more venerable look in the yellow sunshine than by pale moonlight; and I could not but feel the force of the Squire’s idea, that the formal terraces, heavily moulded balustrades, and clipped yew trees, carried with them an air of proud aristocracy.

While we were talking we heard the distant toll of the village bell, and I was told that the Squire was a little particular in having his household at church on a Christmas morning; considering it a day of pouring out of thanks and rejoicing; for, as old Tusser observed:

At Christmas be merry, and thankful withal,
And feast thy poor neighbours, the great and the small.

‘If you are disposed to go to church,’ said Frank Bracebridge, ‘I can promise you a specimen of my cousin Simon’s musical achievements. As the church is destitute of an organ, he has formed a band from the village amateurs, and established a musical club for their improvement; he has also sorted a choir, as he sorted my father’s pack of hounds, according to the directions of Jervaise Markham, in his “Country Contentments”; for the bass he has sought out all the “deep solemn mouths,” and for the tenor the “loud ringing mouths,” among the country bumpkins; and for “sweet mouths” he has culled with curious taste among the prettiest lasses in the neighbourhood; though these last, he affirms, are the most difficult to keep in tune.’

As the morning, though frosty, was remarkably fine and clear, the most of the family walked to the church, which was a very old building of grey stone, and stood near a village, about half a mile from the park gate. Adjoining it was a low snug parsonage, which seemed coeval with the church. As we passed this sheltered nest, the parson issued forth and preceded us.

I had expected to see a sleek, well-conditioned pastor, such as is often found in a snug living in the vicinity of a rich patron’s table; but I was disappointed. The parson was a little, meagre, black-looking man, with a grizzled wig that was too wide, and stood off from each ear; so that his head seemed to have shrunk away within it, like a dried filbert in its shell. He wore a rusty coat, with great skirts, and pockets that would have held the church Bible and prayer-book; and his small legs seemed still smaller, from being planted in large shoes decorated with enormous buckles.