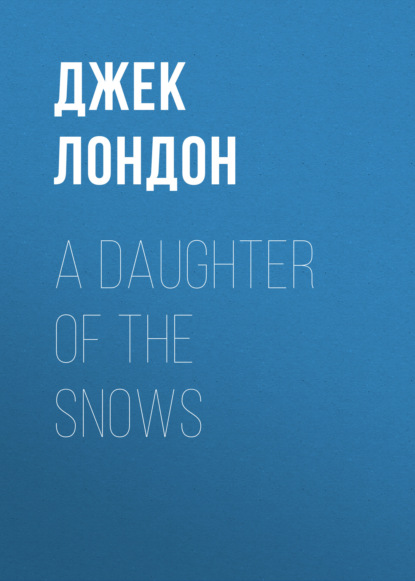 Джек Лондон
A Daughter of the Snows


He did not have much education as education goes. To the three R's his mother taught him by camp-fire and candle-light, he had added a somewhat miscellaneous book-knowledge; but he was not burdened with what he had gathered. Yet he read the facts of life understandingly, and the sobriety which comes of the soil was his, and the clear earth-vision.

And so it came about that Jacob Welse crossed over the Chilcoot in an early day, and disappeared into the vast unknown. A year later he emerged at the Russian missions clustered about the mouth of the Yukon on Bering Sea. He had journeyed down a river three thousand miles long, he had seen things, and dreamed a great dream. But he held his tongue and went to work, and one day the defiant whistle of a crazy stern-wheel tub saluted the midnight sun on the dank river-stretch by Fort o' Yukon. It was a magnificent adventure. How he achieved it only Jacob Welse can tell; but with the impossible to begin with, plus the impossible, he added steamer to steamer and heaped enterprise upon enterprise. Along many a thousand miles of river and tributary he built trading-posts and warehouses. He forced the white man's axe into the hands of the aborigines, and in every village and between the villages rose the cords of four-foot firewood for his boilers. On an island in Bering Sea, where the river and the ocean meet, he established a great distributing station, and on the North Pacific he put big ocean steamships; while in his offices in Seattle and San Francisco it took clerks by the score to keep the order and system of his business.

Men drifted into the land. Hitherto famine had driven them out, but Jacob Welse was there now, and his grub-stores; so they wintered in the frost and groped in the frozen muck for gold. He encouraged them, grub-staked them, carried them on the books of the company. His steamers dragged them up the Koyokuk in the old days of Arctic City. Wherever pay was struck he built a warehouse and a store. The town followed. He explored; he speculated; he developed. Tireless, indomitable, with the steel-glitter in his dark eyes, he was everywhere at once, doing all things. In the opening up of a new river he was in the van; and at the tail-end also, hurrying forward the grub. On the Outside he fought trade-combinations; made alliances with the corporations of the earth, and forced discriminating tariffs from the great carriers. On the Inside he sold flour, and blankets, and tobacco; built saw-mills, staked townsites, and sought properties in copper, iron, and coal; and that the miners should be well-equipped, ransacked the lands of the Arctic even as far as Siberia for native-made snow-shoes, muclucs, and parkas.

He bore the country on his shoulders; saw to its needs; did its work. Every ounce of its dust passed through his hands; every post-card and letter of credit. He did its banking and exchange; carried and distributed its mails. He frowned upon competition; frightened out predatory capital; bluffed militant syndicates, and when they would not, backed his bluff and broke them. And for all, yet found time and place to remember his motherless girl, and to love her, and to fit her for the position he had made.

"So I think, captain, you will agree that we must exaggerate the seriousness of the situation." Jacob Welse helped his visitor into his fur great-coat and went on. "Not that it is not serious, but that it may not become more serious. Both you and I have handled famines before. We must frighten them, and frighten them now, before it is too late. Take five thousand men out of Dawson and there will be grub to last. Let those five thousand carry their tale of famine to Dyea and Skaguay, and they will prevent five thousand more coming in over the ice."

"Quite right! And you may count on the hearty co-operation of the police, Mr. Welse." The speaker, a strong-faced, grizzled man, heavy-set and of military bearing, pulled up his collar and rested his hand on the door-knob. "I see already, thanks to you, the newcomers are beginning to sell their outfits and buy dogs. Lord! won't there be a stampede out over the ice as soon as the river closes down! And each that sells a thousand pounds of grub and goes lessens the proposition by one empty stomach and fills another that remains. When does the Laura start?"

"This morning, with three hundred grubless men aboard. Would that they were three thousand!"

Amen to that! And by the way, when does your daughter arrive?"

"'Most any day, now." Jacob Welse's eyes warmed. "And I want you to dinner when she does, and bring along a bunch of your young bucks from the Barracks. I don't know all their names, but just the same extend the invitation as though from me personally. I haven't cultivated the social side much, – no time, but see to it that the girl enjoys herself. Fresh from the States and London, and she's liable to feel lonesome. You understand."

Jacob Welse closed the door, tilted his chair back, and cocked his feet on the guard-rail of the stove. For one half-minute a girlish vision wavered in the shimmering air above the stove, then merged into a woman of fair Saxon type.

The door opened. "Mr. Welse, Mr. Foster sent me to find out if he is to go on filling signed warehouse orders?"

"Certainly, Mr. Smith. But tell him to scale them down by half. If a man holds an order for a thousand pounds, give him five hundred."

He lighted a cigar and tilted back again in his chair.

Captain McGregor strode in and remained standing before his employer. The rough hand of the New World had been laid upon the Scotsman from his boyhood; but sterling honesty was written in every line of his bitter-seamed face, while a prognathous jaw proclaimed to the onlooker that honesty was the best policy, – for the onlooker at any rate, should he wish to do business with the owner of the jaw. This warning was backed up by the nose, side-twisted and broken, and by a long scar which ran up the forehead and disappeared in the gray-grizzled hair.

"We throw off the lines in an hour, sir; so I've come for the last word."

"I had other work cut out for you this winter; but I have changed my mind and chosen you to go down with the Laura. Can you guess why?"

Captain McGregor swayed his weight from one leg to the other, and a shrewd chuckle of a smile wrinkled the corners of his eyes. "Going to be trouble," he grunted.

"And I couldn't have picked a better man. Mr. Bally will give you detailed instructions as you go aboard. But let me say this: If we can't scare enough men out of the country, there'll be need for every pound of grub at Fort Yukon. Understand?"

"So no extravagance. You are taking three hundred men down with you. The chances are that twice as many more will go down as soon as the river freezes. You'll have a thousand to feed through the winter. Put them on rations, – working rations, – and see that they work. Cordwood, six dollars per cord, and piled on the bank where steamers can make a landing. No work, no rations. Understand?"

"A thousand men can get ugly, if they are idle. They can get ugly anyway. Watch out they don't rush the caches. If they do, – do your duty."

The other nodded grimly. His hands gripped unconsciously, while the scar on his forehead took on a livid hue.

"There are five steamers in the ice. Make them safe against the spring break-up. But first transfer all their cargoes to one big cache. You can defend it better, and make the cache impregnable. Send a messenger down to Fort Burr, asking Mr. Carter for three of his men. He doesn't need them. Nothing much is doing at Circle City. Stop in on the way down and take half of Mr. Burdwell's men. You'll need them. There'll be gun-fighters in plenty to deal with. Be stiff. Keep things in check from the start. Remember, the man who shoots first comes off with the whole hide. And keep a constant eye on the grub."

"And on the forty-five-nineties," Captain McGregor rumbled back as he passed out the door.

"See here, Welse, what's this mean?" John Melton followed wrathfully on the heels of the clerk, and he almost walked over him as he flourished a paper before the head of the company. "Read that! What's it stand for?"

Jacob Welse glanced over it and looked up coolly. "One thousand pounds of grub."

"That's what I say, but that fellow you've got in the warehouse says no, – five hundred's all it's good for."

"He spoke the truth."

"It stands for one thousand pounds, but in the warehouse it is only good for five hundred."

"That your signature?" thrusting the receipt again into the other's line of vision.

"Then what are you going to do about it?"

"Give you five hundred. What are you going to do about it?"

"Refuse to take it."

"Very good. There is no further discussion."

"Yes there is. I propose to have no further dealings with you. I'm rich enough to freight my own stuff in over the Passes, and I will next year. Our business stops right now and for all time."

"I cannot object to that. You have three hundred thousand dollars in dust deposited with me. Go to Mr. Atsheler and draw it at once."

The man fumed impotently up and down. "Can't I get that other five hundred? Great God, man! I've paid for it! You don't intend me to starve?"

"Look here, Melton." Jacob Welse paused to knock the ash from his cigar. "At this very moment what are you working for? What are you trying to get?"

"A thousand pounds of grub."

"For your own stomach?"

The Bonanzo king nodded his head.