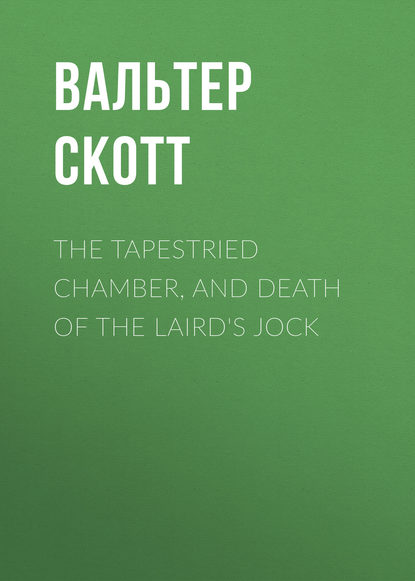 The Tapestried Chamber, and Death of the Laird's Jock

This is another little story from The Keepsake of 1828. It was told to me many years ago by the late Miss Anna Seward, who, among other accomplishments that rendered her an amusing inmate in a country house, had that of recounting narratives of this sort with very considerable effect – much greater, indeed, than any one would be apt to guess from the style of her written performances. There are hours and moods when most people are not displeased to listen to such things; and I have heard some of the greatest and wisest of my contemporaries take their share in telling them.

THE LADY IN THE SACQUE

The following narrative is given from the pen, so far as memory permits, in the same character in which it was presented to the author’s ear; nor has he claim to further praise, or to be more deeply censured, than in proportion to the good or bad judgment which he has employed in selecting his materials, as he has studiously avoided any attempt at ornament which might interfere with the simplicity of the tale.

At the same time, it must be admitted that the particular class of stories which turns on the marvellous possesses a stronger influence when told than when committed to print. The volume taken up at noonday, though rehearsing the same incidents, conveys a much more feeble impression than is achieved by the voice of the speaker on a circle of fireside auditors, who hang upon the narrative as the narrator details the minute incidents which serve to give it authenticity, and lowers his voice with an affectation of mystery while he approaches the fearful and wonderful part. It was with such advantages that the present writer heard the following events related, more than twenty years since, by the celebrated Miss Seward of Litchfield, who, to her numerous accomplishments, added, in a remarkable degree, the power of narrative in private conversation. In its present form the tale must necessarily lose all the interest which was attached to it by the flexible voice and intelligent features of the gifted narrator. Yet still, read aloud to an undoubting audience by the doubtful light of the closing evening, or in silence by a decaying taper, and amidst the solitude of a half-lighted apartment, it may redeem its character as a good ghost story. Miss Seward always affirmed that she had derived her information from an authentic source, although she suppressed the names of the two persons chiefly concerned. I will not avail myself of any particulars I may have since received concerning the localities of the detail, but suffer them to rest under the same general description in which they were first related to me; and for the same reason I will not add to or diminish the narrative by any circumstance, whether more or less material, but simply rehearse, as I heard it, a story of supernatural terror.

About the end of the American war, when the officers of Lord Cornwallis’s army, which surrendered at Yorktown, and others, who had been made prisoners during the impolitic and ill-fated controversy, were returning to their own country, to relate their adventures, and repose themselves after their fatigues, there was amongst them a general officer, to whom Miss S. gave the name of Browne, but merely, as I understood, to save the inconvenience of introducing a nameless agent in the narrative. He was an officer of merit, as well as a gentleman of high consideration for family and attainments.

Some business had carried General Browne upon a tour through the western counties, when, in the conclusion of a morning stage, he found himself in the vicinity of a small country town, which presented a scene of uncommon beauty, and of a character peculiarly English.

The little town, with its stately old church, whose tower bore testimony to the devotion of ages long past, lay amidst pastures and cornfields of small extent, but bounded and divided with hedgerow timber of great age and size. There were few marks of modern improvement. The environs of the place intimated neither the solitude of decay nor the bustle of novelty; the houses were old, but in good repair; and the beautiful little river murmured freely on its way to the left of the town, neither restrained by a dam nor bordered by a towing-path.

Upon a gentle eminence, nearly a mile to the southward of the town, were seen, amongst many venerable oaks and tangled thickets, the turrets of a castle as old as the walls of York and Lancaster, but which seemed to have received important alterations during the age of Elizabeth and her successor, It had not been a place of great size; but whatever accommodation it formerly afforded was, it must be supposed, still to be obtained within its walls. At least, such was the inference which General Browne drew from observing the smoke arise merrily from several of the ancient wreathed and carved chimney-stalks. The wall of the park ran alongside of the highway for two or three hundred yards; and through the different points by which the eye found glimpses into the woodland scenery, it seemed to be well stocked. Other points of view opened in succession – now a full one of the front of the old castle, and now a side glimpse at its particular towers, the former rich in all the bizarrerie of the Elizabethan school, while the simple and solid strength of other parts of the building seemed to show that they had been raised more for defence than ostentation.

Delighted with the partial glimpses which he obtained of the castle through the woods and glades by which this ancient feudal fortress was surrounded, our military traveller was determined to inquire whether it might not deserve a nearer view, and whether it contained family pictures or other objects of curiosity worthy of a stranger’s visit, when, leaving the vicinity of the park, he rolled through a clean and well-paved street, and stopped at the door of a well-frequented inn.

Before ordering horses, to proceed on his journey, General Browne made inquiries concerning the proprietor of the chateau which had so attracted his admiration, and was equally surprised and pleased at hearing in reply a nobleman named, whom we shall call Lord Woodville. How fortunate! Much of Browne’s early recollections, both at school and at college, had been connected with young Woodville, whom, by a few questions, he now ascertained to be the same with the owner of this fair domain. He had been raised to the peerage by the decease of his father a few months before, and, as the General learned from the landlord, the term of mourning being ended, was now taking possession of his paternal estate in the jovial season of merry, autumn, accompanied by a select party of friends, to enjoy the sports of a country famous for game.

This was delightful news to our traveller. Frank Woodville had been Richard Browne’s fag at Eton, and his chosen intimate at Christ Church; their pleasures and their tasks had been the same; and the honest soldier’s heart warmed to find his early friend in possession of so delightful a residence, and of an estate, as the landlord assured him with a nod and a wink, fully adequate to maintain and add to his dignity. Nothing was more natural than that the traveller should suspend a journey, which there was nothing to render hurried, to pay a visit to an old friend under such agreeable circumstances.

The fresh horses, therefore, had only the brief task of conveying the General’s travelling carriage to Woodville Castle. A porter admitted them at a modern Gothic lodge, built in that style to correspond with the castle itself, and at the same time rang a bell to give warning of the approach of visitors. Apparently the sound of the bell had suspended the separation of the company, bent on the various amusements of the morning; for, on entering the court of the chateau, several young men were lounging about in their sporting dresses, looking at and criticizing the dogs which the keepers held in readiness to attend their pastime. As General Browne alighted, the young lord came to the gate of the hall, and for an instant gazed, as at a stranger, upon the countenance of his friend, on which war, with its fatigues and its wounds, had made a great alteration. But the uncertainty lasted no longer than till the visitor had spoken, and the hearty greeting which followed was such as can only be exchanged betwixt those who have passed together the merry days of careless boyhood or early youth.

“If I could have formed a wish, my dear Browne,” said Lord Woodville, “it would have been to have you here, of all men, upon this occasion, which my friends are good enough to hold as a sort of holiday. Do not think you have been unwatched during the years you have been absent from us. I have traced you through your dangers, your triumphs, your misfortunes, and was delighted to see that, whether in victory or defeat, the name of my old friend was always distinguished with applause.”

The General made a suitable reply, and congratulated his friend on his new dignities, and the possession of a place and domain so beautiful.

“Nay, you have seen nothing of it as yet,” said Lord Woodville, “and I trust you do not mean to leave us till you are better acquainted with it. It is true, I confess, that my present party is pretty large, and the old house, like other places of the kind, does not possess so much accommodation as the extent of the outward walls appears to promise. But we can give you a comfortable old-fashioned room, and I venture to suppose that your campaigns have taught you to be glad of worse quarters.”

The General shrugged his shoulders, and laughed. “I presume,” he said, “the worst apartment in your chateau is considerably superior to the old tobacco-cask in which I was fain to take up my night’s lodging when I was in the Bush, as the Virginians call it, with the light corps. There I lay, like Diogenes himself, so delighted with my covering from the elements, that I made a vain attempt to have it rolled on to my next quarters; but my commander for the time would give way to no such luxurious provision, and I took farewell of my beloved cask with tears in my eyes.”

“Well, then, since you do not fear your quarters,” said Lord Woodville, “you will stay with me a week at least. Of guns, dogs, fishing-rods, flies, and means of sport by sea and land, we have enough and to spare – you cannot pitch on an amusement but we will find the means of pursuing it. But if you prefer the gun and pointers, I will go with you myself, and see whether you have mended your shooting since you have been amongst the Indians of the back settlements.”

The General gladly accepted his friendly host’s proposal in all its points. After a morning of manly exercise, the company met at dinner, where it was the delight of Lord Woodville to conduce to the display of the high properties of his recovered friend, so as to recommend him to his guests, most of whom were persons of distinction. He led General Browne to speak of the scenes he had witnessed; and as every word marked alike the brave officer and the sensible man, who retained possession of his cool judgment under the most imminent dangers, the company looked upon the soldier with general respect, as on one who had proved himself possessed of an uncommon portion of personal courage – that attribute of all others of which everybody desires to be thought possessed.