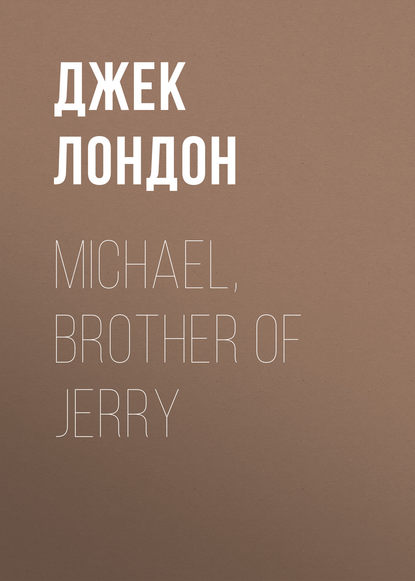 The morning the Makambo entered Sydney harbour, Captain Duncan had another try for Michael. The port doctor’s launch was coming alongside, when he nodded up to Daughtry, who was passing along the deck:

“Steward, I’ll give you twenty pounds.”

“Twenty-five pounds, then. I can’t go beyond that. Besides, there are plenty more Irish terriers in the world.”

“But I want Killeny Boy,” the captain persisted.

“Twenty-five sovereigns is a lot of money.. for a dog,” Captain Duncan said.

“An’ Killeny Boy’s a lot of dog.. for the money,” the steward retorted. “Why, sir, cuttin’ out all sentiment, his tricks is worth more ’n that. Him not recognizing me when I don’t want ’m to is worth fifty pounds of itself. An’ there’s his countin’ an’ his singin’, an’ all the rest of his tricks. Now, no matter how I got him, he didn’t have them tricks. Them tricks are mine. I taught him them. He ain’t the dog he was when he come on board. He’s a whole lot of me now, an’ sellin’ him would be like sellin’ a piece of myself.”

“No, sir, thankin’ you just the same, sir,” was Daughtry’s refusal.

And Captain Duncan was forced to turn away in order to greet the port doctor coming over the side.

Scarcely had the Makambo passed quarantine, and while on her way up harbour to dock, when a trim man-of-war launch darted in to her side and a trim lieutenant mounted the Makambo’s boarding-ladder. His mission was quickly explained. The Albatross, British cruiser of the second class, of which he was fourth lieutenant, had called in at Tulagi with dispatches from the High Commissioner of the English South Seas. A scant twelve hours having intervened between her arrival and the Makambo’s departure, the Commissioner of the Solomons and Captain Kellar had been of the opinion that the missing dog had been carried away on the steamer. Knowing that the Albatross would beat her to Sydney, the captain of the Albatross had undertaken to look up the dog. Was the dog, an Irish terrier answering to the name of Michael, on board?

Captain Duncan truthfully admitted that it was, though he most unveraciously shielded Dag Daughtry by repeating his yarn of the dog coming on board of itself. How to return the dog to Captain Kellar? – was the next question; for the Albatross was bound on to New Zealand. Captain Duncan settled the matter.

“The Makambo will be back in Tulagi in eight weeks,” he told the lieutenant, “and I’ll undertake personally to deliver the dog to its owner. In the meantime we’ll take good care of it. Our steward has sort of adopted it, so it will be in good hands.”

“Seems we don’t either of us get the dog,” Daughtry commented resignedly, when Captain Duncan had explained the situation.

But when Daughtry turned his back and started off along the deck, his constitutional obstinacy tightened his brows so that the Shortlands planter, observing it, wondered what the captain had been rowing him about.

Despite his six quarts a day and all his easy-goingness of disposition, Dag Daughtry possessed certain integrities. Though he could steal a dog, or a cat, without a twinge of conscience, he could not but be faithful to his salt, being so made. He could not draw wages for being a ship steward without faithfully performing the functions of ship steward. Though his mind was firmly made up, during the several days of the Makambo in Sydney, lying alongside the Burns Philp Dock, he saw to every detail of the cleaning up after the last crowd of outgoing passengers, and to every detail of preparation for the next crowd of incoming passengers who had tickets bought for the passage far away to the coral seas and the cannibal isles.

In the midst of this devotion to his duty, he took a night off and part of two afternoons. The night off was devoted to the public-houses which sailors frequent, and where can be learned the latest gossip and news of ships and of men who sail upon the sea. Such information did he gather, over many bottles of beer, that the next afternoon, hiring a small launch at a cost of ten shillings, he journeyed up the harbour to Jackson Bay, where lay the lofty-poled, sweet-lined, three-topmast American schooner, the Mary Turner.

Once on board, explaining his errand, he was taken below into the main cabin, where he interviewed, and was interviewed by, a quartette of men whom Daughtry qualified to himself as “a rum bunch.”

It was because he had talked long with the steward who had left the ship, that Dag Daughtry recognized and identified each of the four men. That, surely, was the “Ancient Mariner,” sitting back and apart with washed eyes of such palest blue that they seemed a faded white. Long thin wisps of silvery, unkempt hair framed his face like an aureole. He was slender to emaciation, cavernously checked, roll after roll of skin, no longer encasing flesh or muscle, hanging grotesquely down his neck and swathing the Adam’s apple so that only occasionally, with queer swallowing motions, did it peep out of the mummy-wrappings of skin and sink back again from view.

Beginning at the right temple, a ghastly scar split the cheek-bone, sank into the depths of the hollow cheek, notched across the lower jaw, and plunged to disappearance among the prodigious skin-folds of the neck. The withered lobes of both ears were perforated by tiny gypsy-like circles of gold. On the skeleton fingers of his right hand were no less than five rings – not men’s rings, nor women’s, but foppish rings – “that would fetch a price,” Daughtry adjudged. On the left hand were no rings, for there were no fingers to wear them. Only was there a thumb; and, for that matter, most of the hand was missing as well, as if it had been cut off by the same slicing edge that had cleaved him from temple to jaw and heaven alone knew how far down that skin-draped neck.

The Ancient Mariner’s washed eyes seemed to bore right through Daughtry (or at least so Daughtry felt), and rendered him so uncomfortable as to make him casually step to the side for the matter of a yard. This was possible, because, a servant seeking a servant’s billet, he was expected to stand and face the four seated ones as if they were judges on the bench and he the felon in the dock. Nevertheless, the gaze of the ancient one pursued him, until, studying it more closely, he decided that it did not reach to him at all. He got the impression that those washed pale eyes were filmed with dreams, and that the intelligence, the thing, that dwelt within the skull, fluttered and beat against the dream-films and no farther.

“How much would you expect?” the captain was asking, – a most unsealike captain, in Daughtry’s opinion; rather, a spick-and-span, brisk little business-man or floor-walker just out of a bandbox.

“He shall not share,” spoke up another of the four, huge, raw-boned, middle-aged, whom Daughtry identified by his ham-like hands as the California wheat-farmer described by the departed steward.

“Share —what, sir?” Daughtry queried, though well he knew, the other steward having cursed to him the day he sailed from San Francisco on a blind lay instead of straight wages. “Not that it matters, sir,” he hastened to add. “I spent a whalin’ voyage once, three years of it, an’ paid off with a dollar. Wages for mine, an’ sixty gold a month, seein’ there’s only four of you.”

“And a mate,” the captain added.

“But yourself?” spoke up the fourth man, a huge-bulking, colossal-bodied, greasy-seeming grossness of flesh – the Armenian Jew and San Francisco pawnbroker the previous steward had warned Daughtry about. “Have you papers – letters of recommendation, the documents you receive when you are paid off before the shipping commissioners?”

“I might ask, sir,” Dag Daughtry brazened it, “for your own papers. This ain’t no regular cargo-carrier or passenger-carrier, no more than you gentlemen are a regular company of ship-owners, with regular offices, doin’ business in a regular way. How do I know if you own the ship even, or that the charter ain’t busted long ago, or that you’re being libelled ashore right now, or that you won’t dump me on any old beach anywheres without a soo-markee of what’s comin’ to me? Howsoever” – he anticipated by a bluff of his own the show of wrath from the Jew that he knew would be wind and bluff – “howsoever, here’s my papers.. ”

With a swift dip of his hand into his inside coat-pocket he scattered out in a wealth of profusion on the cabin table all the papers, sealed and stamped, that he had collected in forty-five years of voyaging, the latest date of which was five years back.

“I don’t ask your papers,” he went on. “What I ask is, cash payment in full the first of each month, sixty dollars a month gold – ”

“Oodles and oodles of it, gold and gold and better than gold, in cask and chest, in cask and chest, a fathom under the sand,” the Ancient Mariner assured him in beneficent cackles. “Kings, principalities and powers! – all of us, the least of us. And plenty more, my gentlemen, plenty more. The latitude and longitude are mine, and the bearings from the oak ribs on the shoal to Lion’s Head, and the cross-bearings from the points unnamable, I only know. I only still live of all that brave, mad, scallywag ship’s company.. ”

“Will you sign the articles to that?” the Jew demanded, cutting in on the ancient’s maunderings.

“What port do you wind up the cruise in?” Daughtry asked.

The Jew, the captain, and the farmer nodded.

“But there’s several other things to be agreed upon,” Daughtry continued. “In the first place, I want my six quarts a day. I’m used to it, and I’m too old a stager to change my habits.”

“Of spirits, I suppose?” the Jew asked sarcastically.

“No; of beer, good English beer. It must be understood beforehand, no matter what long stretches we may be at sea, that a sufficient supply is taken along.”

“Anything else?” the captain queried.

“Yes, sir,” Daughtry answered. “I got a dog that must come along.”

“Anything else? – a wife or family maybe?” the farmer asked.