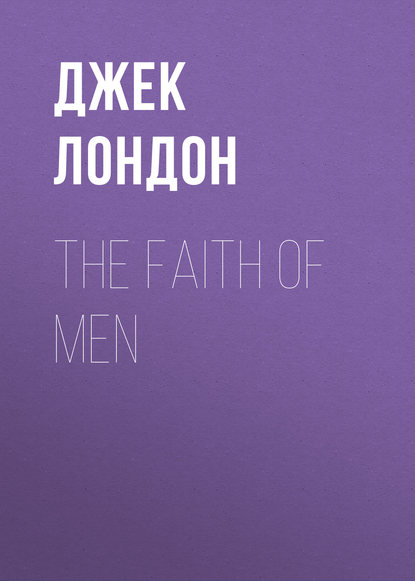 Джек Лондон
The Faith of Men


“’And yet further, my heart is softened, and I have repented me of my madness. I, who am a fool and a son of fools; I, who am the slave of the bad god Biz-e-Nass; I, who see thy empty bellies and knew not wherewith to fill them – why shall I be chief, and sit above thee, and rule to thine own destruction? Why should I do this, which is not good? But Moosu, who is shaman, and who is wise above men, is so made that he can rule with a soft hand and justly. And because of the things I have related do I make abdication and give my chiefship to Moosu, who alone knoweth how ye may be fed in this day when there be no meat in the land.’

“At this there was a great clapping of hands, and the people cried, ‘Kloshe! Kloshe!’ which means ‘good.’ I had seen the wonder-worry in Moosu’s eyes; for he could not understand, and was fearful of my white man’s wisdom. I had met his wishes all along the line, and even anticipated some; and standing there, self-shorn of all my power, he knew the time did not favour to stir the people against me.

“Before they could disperse I made announcement that while the still went to Moosu, whatever hooch I possessed went to the people. Moosu tried to protest at this, for never had we permitted more than a handful to be drunk at a time; but they cried, ‘Kloshe! Kloshe!’ and made festival before my door. And while they waxed uproarious without, as the liquor went to their heads, I held council within with Angeit and the faithful ones. I set them the tasks they were to do, and put into their mouths the words they were to say. Then I slipped away to a place back in the woods where I had two sleds, well loaded, with teams of dogs that were not overfed. Spring was at hand, you see, and there was a crust to the snow; so it was the best time to take the way south. Moreover, the tobacco was gone. There I waited, for I had nothing to fear. Did they bestir themselves on my trail, their dogs were too fat, and themselves too lean, to overtake me; also, I deemed their bestirring would be of an order for which I had made due preparation.

“First came a faithful one, running, and after him another. ‘O master,’ the first cried, breathless, ‘there be great confusion in the village, and no man knoweth his own mind, and they be of many minds. Everybody hath drunken overmuch, and some be stringing bows, and some be quarrelling one with another. Never was there such a trouble.’

“And the second one: ‘And I did as thou biddest, O master, whispering shrewd words in thirsty ears, and raising memories of the things that were of old time. The woman Ipsukuk waileth her poverty and the wealth that no longer is hers. And Tummasook thinketh himself once again chief, and the people are hungry and rage up and down.’

“And a third one: ‘And Neewak hath overthrown the altars of Moosu, and maketh incantation before the time-honoured and ancient gods. And all the people remember the wealth that ran down their throats, and which they possess no more. And first, Esanetuk, who be sicktumtum, fought with Kluktu, and there was much noise. And next, being daughters of the one mother, did they fight with Tukeliketa. And after that did they three fall upon Moosu, like wind-squalls, from every hand, till he ran forth from the igloo, and the people mocked him. For a man who cannot command his womankind is a fool.’

“Then came Angeit: ‘Great trouble hath befallen Moosu, O master, for I have whispered to advantage, till the people came to Moosu, saying they were hungry and demanding the fulfilment of prophecy. And there was a loud shout of “Itlwillie! Itlwillie!” (Meat.) So he cried peace to his womenfolk, who were overwrought with anger and with hooch, and led the tribe even to thy meat caches. And he bade the men open them and be fed. And lo, the caches were empty. There was no meat. They stood without sound, the people being frightened, and in the silence I lifted my voice. “O Moosu, where is the meat? That there was meat we know. Did we not hunt it and drag it in from the hunt? And it were a lie to say one man hath eaten it; yet have we seen nor hide nor hair. Where is the meat, O Moosu? Thou hast the ear of God. Where is the meat?”

“‘And the people cried, “Thou hast the ear of God. Where is the meat?” And they put their heads together and were afraid. Then I went among them, speaking fearsomely of the unknown things, of the dead that come and go like shadows and do evil deeds, till they cried aloud in terror and gathered all together, like little children afraid of the dark. Neewak made harangue, laying this evil that had come upon them at the door of Moosu. When he had done, there was a furious commotion, and they took spears in their hands, and tusks of walrus, and clubs, and stones from the beach. But Moosu ran away home, and because he had not drunken of hooch they could not catch him, and fell one over another and made haste slowly. Even now they do howl without his igloo, and his woman-folk within, and what of the noise, he cannot make himself heard.’

“‘O Angeit, thou hast done well,’ I commanded. ‘Go now, taking this empty sled and the lean dogs, and ride fast to the igloo of Moosu; and before the people, who are drunken, are aware, throw him quick upon the sled and bring him to me.’

“I waited and gave good advice to the faithful ones till Angeit returned. Moosu was on the sled, and I saw by the fingermarks on his face that his womankind had done well by him. But he tumbled off and fell in the snow at my feet, crying: ‘O master, thou wilt forgive Moosu, thy servant, for the wrong things he has done! Thou art a great man! Surely wilt thou forgive!’

Thomas Stevens smiled quietly to himself as he lighted his fifth cigar and sent curling smoke-rings ceilingward.

“But how about the people of Tattarat?” I asked. “Kind of rough, wasn’t it, to leave them flat with famine?”

And he answered, laughing, between two smoke-rings, “Were there not the fat dogs?”

THE FAITH OF MEN

“That suits me,” said the second man, turning, as he spoke, to the Indian that was mending snowshoes in a corner of the cabin. “Here, you Billebedam, take a run down to Oleson’s cabin like a good fellow, and tell him we want to borrow his dice box.”

This sudden request in the midst of a council on wages of men, wood, and grub surprised Billebedam. Besides, it was early in the day, and he had never known white men of the calibre of Pentfield and Hutchinson to dice and play till the day’s work was done. But his face was impassive as a Yukon Indian’s should be, as he pulled on his mittens and went out the door.

Though eight o’clock, it was still dark outside, and the cabin was lighted by a tallow candle thrust into an empty whisky bottle. It stood on the pine-board table in the middle of a disarray of dirty tin dishes. Tallow from innumerable candles had dripped down the long neck of the bottle and hardened into a miniature glacier. The small room, which composed the entire cabin, was as badly littered as the table; while at one end, against the wall, were two bunks, one above the other, with the blankets turned down just as the two men had crawled out in the morning.

Lawrence Pentfield and Corry Hutchinson were millionaires, though they did not look it. There seemed nothing unusual about them, while they would have passed muster as fair specimens of lumbermen in any Michigan camp. But outside, in the darkness, where holes yawned in the ground, were many men engaged in windlassing muck and gravel and gold from the bottoms of the holes where other men received fifteen dollars per day for scraping it from off the bedrock. Each day thousands of dollars’ worth of gold were scraped from bedrock and windlassed to the surface, and it all belonged to Pentfield and Hutchinson, who took their rank among the richest kings of Bonanza.

Pentfield broke the silence that followed on Billebedam’s departure by heaping the dirty plates higher on the table and drumming a tattoo on the cleared space with his knuckles. Hutchinson snuffed the smoky candle and reflectively rubbed the soot from the wick between thumb and forefinger.