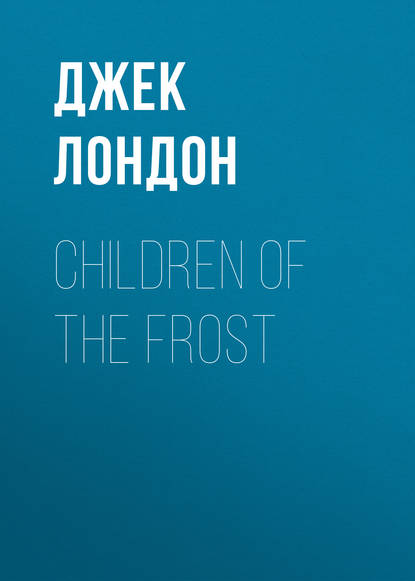 
But Opee-Kwan doubted, and brushed his hand across his brow in sore puzzlement. Nam-Bok was likewise puzzled, and as he looked up and down the line found no welcome in the eyes of the fisherfolk. The men and women whispered together. The children stole timidly back among their elders, and bristling dogs fawned up to him and sniffed suspiciously.

"I bore thee, Nam-Bok, and I gave thee suck when thou wast little," Bask-Wah-Wan whimpered, drawing closer; "and shadow though thou be, or no shadow, I will give thee to eat now."

Nam-Bok made to come to her, but a growl of fear and menace warned him back. He said something in a strange tongue which sounded like "Goddam," and added, "No shadow am I, but a man."

"Who may know concerning the things of mystery?" Opee-Kwan demanded, half of himself and half of his tribespeople. "We are, and in a breath we are not. If the man may become shadow, may not the shadow become man? Nam-Bok was, but is not. This we know, but we do not know if this be Nam-Bok or the shadow of Nam-Bok."

Nam-Bok cleared his throat and made answer. "In the old time long ago, thy father's father, Opee-Kwan, went away and came back on the heels of the years. Nor was a place by the fire denied him. It is said …" He paused significantly, and they hung on his utterance. "It is said," he repeated, driving his point home with deliberation, "that Sipsip, his klooch, bore him two sons after he came back."

"But he had no doings with the off-shore wind," Opee-Kwan retorted. "He went away into the heart of the land, and it is in the nature of things that a man may go on and on into the land."

"And likewise the sea. But that is neither here nor there. It is said … that thy father's father told strange tales of the things he saw."

"I, too, have strange tales to tell," Nam-Bok stated insidiously. And, as they wavered, "And presents likewise."

He pulled from the bidarka a shawl, marvellous of texture and color, and flung it about his mother's shoulders. The women voiced a collective sigh of admiration, and old Bask-Wah-Wan ruffled the gay material and patted it and crooned in childish joy.

"He has tales to tell," Koogah muttered. "And presents," a woman seconded.

And Opee-Kwan knew that his people were eager, and further, he was aware himself of an itching curiosity concerning those untold tales. "The fishing has been good," he said judiciously, "and we have oil in plenty. So come, Nam-Bok, let us feast."

Two of the men hoisted the bidarka on their shoulders and carried it up to the fire. Nam-Bok walked by the side of Opee-Kwan, and the villagers followed after, save those of the women who lingered a moment to lay caressing fingers on the shawl.

There was little talk while the feast went on, though many and curious were the glances stolen at the son of Bask-Wah-Wan. This embarrassed him – not because he was modest of spirit, however, but for the fact that the stench of the seal-oil had robbed him of his appetite, and that he keenly desired to conceal his feelings on the subject.

"Eat; thou art hungry," Opee-Kwan commanded, and Nam-Bok shut both his eyes and shoved his fist into the big pot of putrid fish.

"La la, be not ashamed. The seal were many this year, and strong men are ever hungry." And Bask-Wah-Wan sopped a particularly offensive chunk of salmon into the oil and passed it fondly and dripping to her son.

In despair, when premonitory symptoms warned him that his stomach was not so strong as of old, he filled his pipe and struck up a smoke. The people fed on noisily and watched. Few of them could boast of intimate acquaintance with the precious weed, though now and again small quantities and abominable qualities were obtained in trade from the Eskimos to the northward. Koogah, sitting next to him, indicated that he was not averse to taking a draw, and between two mouthfuls, with the oil thick on his lips, sucked away at the amber stem. And thereupon Nam-Bok held his stomach with a shaky hand and declined the proffered return. Koogah could keep the pipe, he said, for he had intended so to honor him from the first. And the people licked their fingers and approved of his liberality.

Opee-Kwan rose to his feet "And now, O Nam-Bok, the feast is ended, and we would listen concerning the strange things you have seen."

The fisherfolk applauded with their hands, and gathering about them their work, prepared to listen. The men were busy fashioning spears and carving on ivory, while the women scraped the fat from the hides of the hair seal and made them pliable or sewed muclucs with threads of sinew. Nam-Bok's eyes roved over the scene, but there was not the charm about it that his recollection had warranted him to expect. During the years of his wandering he had looked forward to just this scene, and now that it had come he was disappointed. It was a bare and meagre life, he deemed, and not to be compared to the one to which he had become used. Still, he would open their eyes a bit, and his own eyes sparkled at the thought.

"Brothers," he began, with the smug complacency of a man about to relate the big things he has done, "it was late summer of many summers back, with much such weather as this promises to be, when I went away. You all remember the day, when the gulls flew low, and the wind blew strong from the land, and I could not hold my bidarka against it. I tied the covering of the bidarka about me so that no water could get in, and all of the night I fought with the storm. And in the morning there was no land, – only the sea, – and the off-shore wind held me close in its arms and bore me along. Three such nights whitened into dawn and showed me no land, and the off-shore wind would not let me go.

"And when the fourth day came, I was as a madman. I could not dip my paddle for want of food; and my head went round and round, what of the thirst that was upon me. But the sea was no longer angry, and the soft south wind was blowing, and as I looked about me I saw a sight that made me think I was indeed mad."

Nam-Bok paused to pick away a sliver of salmon lodged between his teeth, and the men and women, with idle hands and heads craned forward, waited.

"It was a canoe, a big canoe. If all the canoes I have ever seen were made into one canoe, it would not be so large."

There were exclamations of doubt, and Koogah, whose years were many, shook his head.

"If each bidarka were as a grain of sand," Nam-Bok defiantly continued, "and if there were as many bidarkas as there be grains of sand in this beach, still would they not make so big a canoe as this I saw on the morning of the fourth day. It was a very big canoe, and it was called a schooner. I saw this thing of wonder, this great schooner, coming after me, and on it I saw men – "

"Did the big canoe come fast?"

"The sides were tall, the men short." Opee-Kwan stated the premises with conviction. "And did these men dip with long paddles?"

Nam-Bok grinned. "There were no paddles," he said.

Mouths remained open, and a long silence dropped down. Opee-Kwan borrowed Koogah's pipe for a couple of contemplative sucks. One of the younger women giggled nervously and drew upon herself angry eyes.

"There were no paddles?" Opee-Kwan asked softly, returning the pipe.

"The south wind was behind," Nam-Bok explained.

"But the wind-drift is slow."

"The schooner had wings – thus." He sketched a diagram of masts and sails in the sand, and the men crowded around and studied it. The wind was blowing briskly, and for more graphic elucidation he seized the corners of his mother's shawl and spread them out till it bellied like a sail. Bask-Wah-Wan scolded and struggled, but was blown down the beach for a score of feet and left breathless and stranded in a heap of driftwood. The men uttered sage grunts of comprehension, but Koogah suddenly tossed back his hoary head.

"Ho! Ho!" he laughed. "A foolish thing, this big canoe! A most foolish thing! The plaything of the wind! Wheresoever the wind goes, it goes too. No man who journeys therein may name the landing beach, for always he goes with the wind, and the wind goes everywhere, but no man knows where."

"It is so," Opee-Kwan supplemented gravely. "With the wind the going is easy, but against the wind a man striveth hard; and for that they had no paddles these men on the big canoe did not strive at all."

"And what said you made the sch – sch – schooner go?" Koogah asked, tripping craftily over the strange word.

"The wind," was the impatient response.