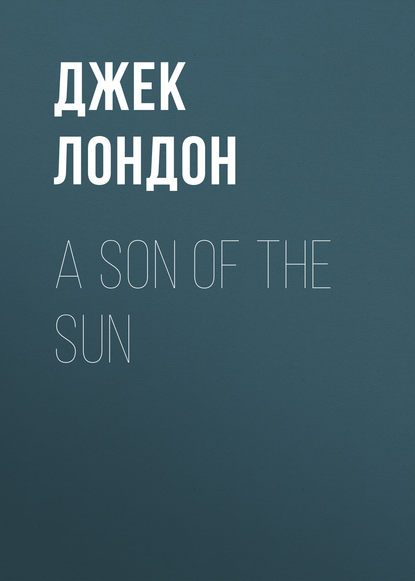 Джек Лондон
A Son Of The Sun

A Son Of The Sun
Джек Лондон

A Son Of The Sun

Chapter One – A SON OF THE SUN

The Willi-Waw lay in the passage between the shore-reef and the outer-reef. From the latter came the low murmur of a lazy surf, but the sheltered stretch of water, not more than a hundred yards across to the white beach of pounded coral sand, was of glass-like smoothness. Narrow as was the passage, and anchored as she was in the shoalest place that gave room to swing, the Willi-Waw’s chain rode up-and-down a clean hundred feet. Its course could be traced over the bottom of living coral. Like some monstrous snake, the rusty chain’s slack wandered over the ocean floor, crossing and recrossing itself several times and fetching up finally at the idle anchor. Big rock-cod, dun and mottled, played warily in and out of the coral. Other fish, grotesque of form and colour, were brazenly indifferent, even when a big fish-shark drifted sluggishly along and sent the rock-cod scuttling for their favourite crevices.

On deck, for’ard, a dozen blacks pottered clumsily at scraping the teak rail. They were as inexpert at their work as so many monkeys. In fact they looked very much like monkeys of some enlarged and prehistoric type. Their eyes had in them the querulous plaintiveness of the monkey, their faces were even less symmetrical than the monkey’s, and, hairless of body, they were far more ungarmented than any monkey, for clothes they had none. Decorated they were as no monkey ever was. In holes in their ears they carried short clay pipes, rings of turtle shell, huge plugs of wood, rusty wire nails, and empty rifle cartridges. The calibre of a Winchester rifle was the smallest hole an ear bore; some of the largest holes were inches in diameter, and any single ear averaged from three to half a dozen holes. Spikes and bodkins of polished bone or petrified shell were thrust through their noses. On the chest of one hung a white doorknob, on the chest of another the handle of a china cup, on the chest of a third the brass cogwheel of an alarm clock. They chattered in queer, falsetto voices, and, combined, did no more work than a single white sailor.

Aft, under an awning, were two white men. Each was clad in a six-penny undershirt and wrapped about the loins with a strip of cloth. Belted about the middle of each was a revolver and tobacco pouch. The sweat stood out on their skin in myriads of globules. Here and there the globules coalesced in tiny streams that dripped to the heated deck and almost immediately evaporated. The lean, dark-eyed man wiped his fingers wet with a stinging stream from his forehead and flung it from him with a weary curse. Wearily, and without hope, he gazed seaward across the outer-reef, and at the tops of the palms along the beach.

“Eight o’clock, an’ hell don’t get hot till noon,” he complained. “Wisht to God for a breeze. Ain’t we never goin’ to get away?”

The other man, a slender German of five and twenty, with the massive forehead of a scholar and the tumble-home chin of a degenerate, did not trouble to reply. He was busy emptying powdered quinine into a cigarette paper. Rolling what was approximately fifty grains of the drug into a tight wad, he tossed it into his mouth and gulped it down without the aid of water.

“Wisht I had some whiskey,” the first man panted, after a fifteen-minute interval of silence.

Another equal period elapsed ere the German enounced, relevant of nothing:

“I’m rotten with fever. I’m going to quit you, Griffiths, when we get to Sydney. No more tropics for me. I ought to known better when I signed on with you.”

“You ain’t been much of a mate,” Griffiths replied, too hot himself to speak heatedly. “When the beach at Guvutu heard I’d shipped you, they all laughed. ‘What? Jacobsen?’ they said. ‘You can’t hide a square face of trade gin or sulphuric acid that he won’t smell out!’ You’ve certainly lived up to your reputation. I ain’t had a drink for a fortnight, what of your snoopin’ my supply.”

“If the fever was as rotten in you as me, you’d understand,” the mate whimpered.

“I ain’t kickin’,” Griffiths answered. “I only wisht God’d send me a drink, or a breeze of wind, or something. I’m ripe for my next chill to-morrow.”

The mate proffered him the quinine. Rolling a fifty-grain dose, he popped the wad into his mouth and swallowed it dry.

“God! God!” he moaned. “I dream of a land somewheres where they ain’t no quinine. Damned stuff of hell! I’ve scoffed tons of it in my time.”

Again he quested seaward for signs of wind. The usual trade-wind clouds were absent, and the sun, still low in its climb to meridian, turned all the sky to heated brass. One seemed to see as well as feel this heat, and Griffiths sought vain relief by gazing shoreward. The white beach was a searing ache to his eyeballs. The palm trees, absolutely still, outlined flatly against the unrefreshing green of the packed jungle, seemed so much cardboard scenery. The little black boys, playing naked in the dazzle of sand and sun, were an affront and a hurt to the sun-sick man. He felt a sort of relief when one, running, tripped and fell on all-fours in the tepid sea-water.

An exclamation from the blacks for’ard sent both men glancing seaward. Around the near point of land, a quarter of a mile away and skirting the reef, a long black canoe paddled into sight.

“Gooma boys from the next bight,” was the mate’s verdict.

One of the blacks came aft, treading the hot deck with the unconcern of one whose bare feet felt no heat. This, too, was a hurt to Griffiths, and he closed his eyes. But the next moment they were open wide.

Both men were on their feet and gazing at the canoe. Aft could be seen the unmistakable sombrero of a white man. Quick alarm showed itself on the face of the mate.

Griffiths satisfied himself by a long look, then ripped out a wrathful oath.

“What’s he doing up here?” he demanded of the mate, of the aching sea and sky, of the merciless blaze of sun, and of the whole superheated and implacable universe with which his fate was entangled.

The mate began to chuckle.

“I told you you couldn’t get away with it,” he said.

But Griffiths was not listening.

“With all his money, coming around like a rent collector,” he chanted his outrage, almost in an ecstasy of anger. “He’s loaded with money, he’s stuffed with money, he’s busting with money. I know for a fact he sold his Yringa plantations for three hundred thousand pounds. Bell told me so himself last time we were drunk at Guvutu. Worth millions and millions, and Shylocking me for what he wouldn’t light his pipe with.” He whirled on the mate. “Of course you told me so. Go on and say it, and keep on saying it. Now just what was it you did tell me so?”

“I told you you didn’t know him, if you thought you could clear the Solomons without paying him. That man Grief is a devil, but he’s straight. I know. I told you he’d throw a thousand quid away for the fun of it, and for sixpence fight like a shark for a rusty tin, I tell you I know. Didn’t he give his Balakula to the Queensland Mission when they lost their Evening Star on San Cristobal? – and the Balakula worth three thousand pounds if she was worth a penny? And didn’t he beat up Strothers till he lay abed a fortnight, all because of a difference of two pound ten in the account, and because Strothers got fresh and tried to make the gouge go through?”

“God strike me blind!” Griffiths cried in im-potency of rage.

The mate went on with his exposition.

“I tell you only a straight man can buck a straight man like him, and the man’s never hit the Solomons that could do it. Men like you and me can’t buck him. We’re too rotten, too rotten all the way through. You’ve got plenty more than twelve hundred quid below. Pay him, and get it over with.”

But Griffiths gritted his teeth and drew his thin lips tightly across them.

“I’ll buck him,” he muttered – more to himself and the brazen ball of sun than to the mate. He turned and half started to go below, then turned back again. “Look here, Jacob-sen. He won’t be here for quarter of an hour. Are you with me? Will you stand by me?”

“Of course I’ll stand by you. I’ve drunk all your whiskey, haven’t I? What are you going to do?”

Jacobsen shrugged his shoulders in calm acquiescence to fate, and Griffiths stepped to the companionway and went below.

Jacobsen watched the canoe across the low reef as it came abreast and passed on to the entrance of the passage. Griffiths, with ink-marks on right thumb and forefinger, returned on deck Fifteen minutes later the canoe came alongside. The man with the sombrero stood up.

“Hello, Griffiths!” he said. “Hello, Jacobsen!” With his hand on the rail he turned to his dusky crew. “You fella boy stop along canoe altogether.”

As he swung over the rail and stepped on deck a hint of catlike litheness showed in the apparently heavy body. Like the other two, he was scantily clad. The cheap undershirt and white loin-cloth did not serve to hide the well put up body. Heavy muscled he was, but he was not lumped and hummocked by muscles. They were softly rounded, and, when they did move, slid softly and silkily under the smooth, tanned skin. Ardent suns had likewise tanned his face till it was swarthy as a Spaniard’s. The yellow mustache appeared incongruous in the midst of such swarthiness, while the clear blue of the eyes produced a feeling of shock on the beholder. It was difficult to realize that the skin of this man had once been fair.

“Where did you blow in from?” Griffiths asked, as they shook hands. “I thought you were over in the Santa Cruz.”

“I was,” the newcomer answered. “But we made a quick passage. The Wonder’s just around in the bight at Gooma, waiting for wind. Some of the bushmen reported a ketch here, and I just dropped around to see. Well, how goes it?”

“Nothing much. Copra sheds mostly empty, and not half a dozen tons of ivory nuts. The women all got rotten with fever and quit, and the men can’t chase them back into the swamps. They’re a sick crowd. I’d ask you to have a drink, but the mate finished off my last bottle. I wisht to God for a breeze of wind.”

Grief, glancing with keen carelessness from one to the other, laughed.

“I’m glad the calm held,” he said. “It enabled me to get around to see you. My supercargo dug up that little note of yours, and I brought it along.”

The mate edged politely away, leaving his skipper to face his trouble.