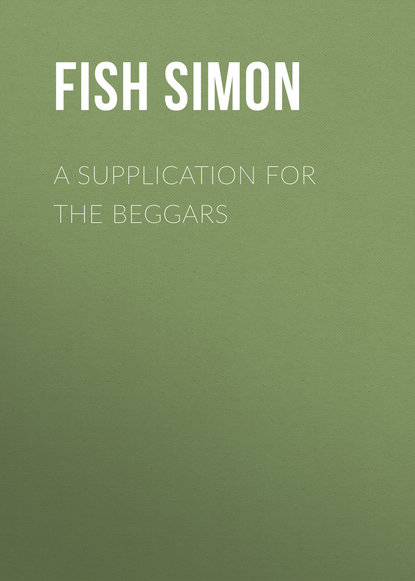 Simon Fish
A Supplication for the Beggars

A Supplication for the Beggars
Simon Fish

A Supplication for the Beggars

Sir Thomas More, who at that time was but Chancellor of the Duchy of Lancaster, was made Lord Chancellor in the room of Cardinal Wolsey on Sunday, the 24th of October 1529.

The following undated work – the second of his controversial ones – was therefore written, printed and published prior to that day, and while as yet he held the lower dignity of the ducal Chancellorship.

The supplycacyon of soulys Made by syr Thomas More knyght councellour to our souerayn lorde the Kynge and chauncellour of hys Duchy of Lancaster.

Agaynst the supplycacyon of beggars.

At fol. xx. of this work occurs the following important passage, which, while crediting the Reformers with a greater science in attack, and a more far-reaching design in their writings than they actually possessed: fixes with precision the year of the first distribution in England of Simon Fish’s Supplicacyon for the Beggers, and with that its sequence in our early Protestant printed literature —

For the techyng and prechyng of all whych thyngys / thys beggers proctour or rather the dyuels proctour with other beggers that la[c]k grace and nether beg nor lo[o]ke for none: bere all thys theyr malyce and wrathe to the churche of C[h]ryste. And seynge there ys no way for attaynyng theyr entent but one of the twayn / yat ys to wyt eyther playnly to wryte agaynst the fayth and the sacramentys (wheryn yf they gat them credence and obtaynyd / they then se[e] well the church must nedys fall therwyth) or els to labour agaynst the church alone / and get the clergye dystroyd / whereuppon they parceyue well that the fayth and sacramentes wo[u]ld not fayle to decay: they parceyuyng thys / haue therfore furste assayd the furst way all redy / sendyng forth Tyndals translacyon of the new testament in such wyse handled as yt shuld haue bene the fountayn and well spryng of all theyr hole heresyes. For he had corrupted and purposely changed in many placys the text / wyth such wordys as he myght make yt seme to the vnlerned people / that the scripture affirmed theyr heresyes it selfe. Then cam sone after out in prynt the dyaloge of freere Roy and frere Hyerome / betwene ye father and ye sonne [Preface dated Argentine (Strasburg), 31 August, 1527] agaynst ye sacrament of ye aulter: and the blasphemouse boke entytled the beryeng of the masse [i.e. Rede me and be not wroth / printed at Strasburg early in 1528]. Then cam forth after Tyndals wykkyd boke of Mammona [Dated Marburg, 8 May 1528] / and after that his more wykkyd boke of obydyence [Dated Marburg, 2 October 1528]. In whych bokys afore specyfyed they go forth playnly agaynst the fayth and holy sacramentis of Crystys church / and most especyally agaynst the blyssed sacrament of ye aulter / wyth as vylanous wordes as the wre[t]ches cou[l]d deuyse. But when they haue perceuyd by experyence yat good people abhorred theyr abomynable bokes: then they beyng therby lerned yat the furst way was not ye best for ye furtherance of theyr purpose / haue now determined them selfe to assay the secunde way / that ys to witte yat forberynge to wryte so openly and dyrectly agaynste all the fayth and the sacramentys as good crysten men coulde not abyde the redyng / they wolde / wyth lyttell towchyng of theyre other heresyes / make one boke specially agaynst ye church and loke how that wold proue.

A dialoge of syr Thomas More knighte: one of the counsayll of oure souerayne lorde the kyng and chauncellor of hys duchy of Lancaster. Wherin be treatyd diuers matters / as of the veneration and worshyp of ymagys and relyques / prayng to sayntys / and goyng on pylgrymage. Wyth many othere thyngys touchyng the pestelent sect of Luther and Tyndale / by th[e] one begone in Saxony / and by th[e] other laboryd to be brought in to Englond.

Of this extraordinarily scarce first edition, there is a copy in the Corporation Library, London.

As Sir Thomas More felt it necessary to write this second work, of the Supplicacyon of Soulys, after he had composed his Dialogue the printing of which was finished in June 1529; and as his Supplicacyon certainly was written and published prior to his advancement on the 24th October following: it is conclusive that S. Fish’s tract had not appeared before he was writing the Dialogue, and therefore that the date of its distribution must by this internal evidence, be fixed as in the spring or summer of 1529; however that date may conflict with early testimony, such as incorrect lists of prohibited books, assigning it to 1524, 1526, etc.

“Throwen and scattered at the procession in Westminster vpon Candlemas day [? 2nd February 1529] before kyng Henry the viij, for him to read and peruse.”

We have been unable to verify this procession at Westminster on this particular date, and think that if it had been so, Sir Thomas More would have surely noticed to the Supplicacyon while writing the Dialogue, the printing of which was in progress during the next four months. He may, however, have thought it necessary to write a special book against S. Fish’s tract, with its distinct line of attack as he has accurately stated it.

It will be seen from the Bibliography that this date of the Spring of 1529 quite harmonizes with those of the contemporary German and Latin translations; which, naturally, would be prompt. It is also not inconsistent with the following allusion at p. 30 to Cardinal Wolsey’s still holding the Lord Chancellorship.

And this is by the reason that the chief instrument of youre lawe ye[a] the chief of your counsell and he whiche hath your swerde in his hond to whome also all the other instrumentes are obedient is alweys a spirituell man.

So much, then, as to the certain approximate date of the publication. Fox is quite wrong in assuming as he does in the following paragraph that this work was the occasion of Bishop Tonstal’s Prohibition of the 24th October 1526, i. e. more than two years previously.

After that the Clergye of England, and especially the Cardinall, vnderstoode these bookes of the Beggars supplication aforesayd, to be strawne abroade in the streetes of London, and also before the kyng. The sayd Cardinall caused not onely his seruauntes diligently to attend to gather them vp, that they should not come into the kynges handes, but also when he vnderstode, that the king had receaued one or two of them, he came vnto the kynges Maiesty saying: “If it shall please your grace, here are diuers seditious persons which haue scattered abroad books conteyning manifest errours and heresies” desiryng his grace to beware of them. Whereupon the kyng putting his hand in his bosome, tooke out one of the bookes and deliuered it vnto the Cardinall. Then the Cardinall, together with the Byshops, consulted &c.

We now come to the only authoritative account of our Author, as it is recorded in the same Third Edition of the Actes and Monumentes &c., p. 896. Ed. 1576.

The story of M[aster]. Simon Fishe.

Before the tyme of M[aster]. Bilney, and the fall of the Cardinall, I should haue placed the story of Symon Fish with the booke called the Supplication of Beggars, declaryng how and by what meanes it came to the kynges hand, and what effect therof followed after, in the reformation of many thynges, especially of the Clergy. But the missyng of a few yeares in this matter, breaketh no great square in our story, though it be now entred here which should haue come in sixe yeares before.

Fox is writing of 1531, and therefore intends us to understand that the present narrative begins in 1525.

The maner and circumstaunce of the matter is this:

After that the light of the Gospel workyng mightely in Germanie, began to spread his beames here also in England, great styrre and alteration followed in the harts of many: so that colored hypocrisie and false doctrine, and painted holynes began to be espyed more and more by the readyng of Gods word. The authoritie of the Bishop of Rome, and the glory of his Cardinals was not so high, but such as had fresh wittes sparcled with Gods grace, began to espy Christ from Antichrist, that is, true sinceritie, from counterfait religion. In the number of whom, was the sayd M[aster]. Symon Fish, a Gentleman of Grayes Inne.

It happened the first yeare that this Gentleman came to London to dwell, which was about the yeare of our Lord 1525 [i. e. between 25 Mar. 1525 and 24 Mar. 1526] that there was a certaine play or interlude made by one Master Roo of the same Inne Gentleman, in which play partly was matter agaynst the Cardinal Wolsey. And where none durst take vpon them to play that part, whiche touched the sayd Cardinall, this foresayd M. Fish tooke upon him to do it, whereupon great displeasure ensued agaynst him, vpon the Cardinals part: In so much as he beyng pursued by the sayd Cardinall, the same night that this Tragedie was playd, was compelled of force to voyde his owne house, and so fled ouer the Sea vnto Tyndall.

We will here interrupt the Martyrologist’s account, with Edward Halle’s description of this “goodly disguisyng.” It occurs at fol. 155 of the history of the eighteenth year of the reign of Henry VIII. [22 April 1526 to 21 April 1527] in his Vnion of the two noble and illustrate families of Lancastre and York &c. 1548.

This Christmas [1526] was a goodly disguisyng plaied at Greis inne, whiche was compiled for the moste part, by Master Jhon Roo, seriant at the law. [some] xx. yere past, and long before the Cardinall had any aucthoritie, the effecte of the plaie was, that lord Gouernaunce was ruled by Dissipacion and Negligence, by whose misgouernance and euil order, lady Publike Wele was put from gouernance: which caused Rumor Populi, Inward Grudge and Disdain of Wanton Souereignetie, to rise with a greate multitude, to expell Negligence and Dissipacion, and to restore Publike Welth again to her estate, which was so doen.

This plaie was so set furth with riche and costly apparel, with straunge diuises of Maskes and morrishes [morris dancers] that it was highly praised of all menne, sauing of the Cardinall, whiche imagined that the plaie had been diuised of hym, and in a great furie sent for the said master Roo, and toke from hym his Coyfe, and sent hym to the Flete, and after he sent for the yong gentlemen, that plaied in the plaie, and them highley rebuked and thretened, and sent one of them called Thomas Moyle of Kent to the Flete. But by the meanes of frendes Master Roo and he were deliuered at last.

This plaie sore displeased the Cardinall, and yet it was neuer meante to hym, as you haue harde, wherfore many wisemen grudged to see hym take it so hartely, and euer the Cardinall saied that the kyng was highly displeased with it, and spake nothyng of hymself.

There is no question as to the date of this “disguisyng.” Archbishop Warham on the 6th February 1527, wrote to his chaplain, Henry Golde, from Knolle that he “Has received his letters, dated London, 6 Feb., stating that Mr. Roo is committed to the Tower for making a certain play. Is sorry such a matter should be taken in earnest.” Letters &c. Henry VIII. Ed. by J. S. Brewer, p. 1277. Ed. 1872.

It would seem however that Fish either did not go or did not stay long abroad at this time. Strype (Eccles. Mem. I. Part II, pp. 63-5. Ed. 1822) has printed, from the Registers of the Bishops of London, the Confession in 1528 of Robert Necton (a person of position, whose brother became Sheriff of Norwich in 1530), by which it appears that during the previous eighteen months, that is from about the beginning of 1527, our Author was “dwellyng by the Wight Friars in London;” and was actively engaged in the importation and circulation of Tyndale’s New Testaments