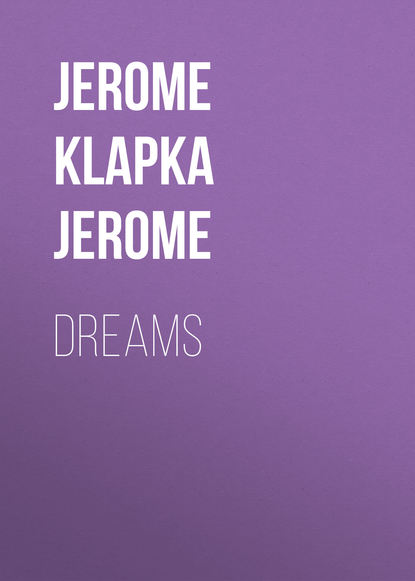 The most extraordinary dream I ever had was one in which I fancied that, as I was going into a theater, the cloak-room attendant stopped me in the lobby and insisted on my leaving my legs behind me.

I was not surprised; indeed, my acquaintanceship with theater harpies would prevent my feeling any surprise at such a demand, even in my waking moments; but I was, I must honestly confess, considerably annoyed. It was not the payment of the cloak-room fee that I so much minded – I offered to give that to the man then and there. It was the parting with my legs that I objected to.

I said I had never heard of such a rule being attempted to be put in force at any respectable theater before, and that I considered it a most absurd and vexatious regulation. I also said I should write to The Times about it.

The man replied that he was very sorry, but that those were his instructions. People complained that they could not get to and from their seats comfortably, because other people's legs were always in the way; and it had, therefore, been decided that, in future, everybody should leave their legs outside.

It seemed to me that the management, in making this order, had clearly gone beyond their legal right; and, under ordinary circumstances, I should have disputed it. Being present, however, more in the character of a guest than in that of a patron, I hardly like to make a disturbance; and so I sat down and meekly prepared to comply with the demand.

I had never before known that the human leg did unscrew. I had always thought it was a fixture. But the man showed me how to undo them, and I found that they came off quite easily.

The discovery did not surprise me any more than the original request that I should take them off had done. Nothing does surprise one in a dream.

I dreamed once that I was going to be hanged; but I was not at all surprised about it. Nobody was. My relations came to see me off, I thought, and to wish me "Good-by!" They all came, and were all very pleasant; but they were not in the least astonished – not one of them. Everybody appeared to regard the coming tragedy as one of the most-naturally-to-be-expected things in the world.

They bore the calamity, besides, with an amount of stoicism that would have done credit to a Spartan father. There was no fuss, no scene. On the contrary, an atmosphere of mild cheerfulness prevailed.

Yet they were very kind. Somebody – an uncle, I think – left me a packet of sandwiches and a little something in a flask, in case, as he said, I should feel peckish on the scaffold.

It is "those twin-jailers of the daring" thought, Knowledge and Experience, that teach us surprise. We are surprised and incredulous when, in novels and plays, we come across good men and women, because Knowledge and Experience have taught us how rare and problematical is the existence of such people. In waking life, my friends and relations would, of course, have been surprised at hearing that I had committed a murder, and was, in consequence, about to be hanged, because Knowledge and Experience would have taught them that, in a country where the law is powerful and the police alert, the Christian citizen is usually pretty successful in withstanding the voice of temptation, prompting him to commit crime of an illegal character.

But into Dreamland, Knowledge and Experience do not enter. They stay without, together with the dull, dead clay of which they form a part; while the freed brain, released from their narrowing tutelage, steals softly past the ebon gate, to wanton at its own sweet will among the mazy paths that wind through the garden of Persephone.

Nothing that it meets with in that eternal land astonishes it because, unfettered by the dense conviction of our waking mind, that nought outside the ken of our own vision can in this universe be, all things to it are possible and even probable. In dreams, we fly and wonder not – except that we never flew before. We go naked, yet are not ashamed, though we mildly wonder what the police are about that they do not stop us. We converse with our dead, and think it was unkind that they did not come back to us before. In dreams, there happens that which human language cannot tell. In dreams, we see "the light that never was on sea or land," we hear the sounds that never yet were heard by waking ears.

It is only in sleep that true imagination ever stirs within us. Awake, we never imagine anything; we merely alter, vary, or transpose. We give another twist to the kaleidoscope of the things we see around us, and obtain another pattern; but not one of us has ever added one tiniest piece of new glass to the toy.

A Dean Swift sees one race of people smaller, and another race of people larger than the race of people that live down his own streets. And he also sees a land where the horses take the place of men. A Bulwer Lytton lays the scene of one of his novels inside the earth instead of outside. A Rider Haggard introduces us to a lady whose age is a few years more than the average woman would care to confess to; and pictures crabs larger than the usual shilling or eighteen-penny size. The number of so called imaginative writers who visit the moon is legion, and for all the novelty that they find, when they get there, they might just as well have gone to Putney. Others are continually drawing for us visions of the world one hundred or one thousand years hence. There is always a depressing absence of human nature about the place; so much so, that one feels great consolation in the thought, while reading, that we ourselves shall be comfortably dead and buried before the picture can be realized. In these prophesied Utopias everybody is painfully good and clean and happy, and all the work is done by electricity.

There is somewhat too much electricity, for my taste, in these worlds to come. One is reminded of those pictorial enamel-paint advertisements that one sees about so often now, in which all the members of an extensive household are represented as gathered together in one room, spreading enamel-paint over everything they can lay their hands upon. The old man is on a step-ladder, daubing the walls and ceiling with "cuckoo's-egg green," while the parlor-maid and the cook are on their knees, painting the floor with "sealing-wax red." The old lady is doing the picture frames in "terra cotta." The eldest daughter and her young man are making sly love in a corner over a pot of "high art yellow," with which, so soon as they have finished wasting their time, they will, it is manifest, proceed to elevate the piano. Younger brothers and sisters are busy freshening up the chairs and tables with "strawberry-jam pink" and "jubilee magenta." Every blessed thing in that room is being coated with enamel paint, from the sofa to the fire-irons, from the sideboard to the eight-day clock. If there is any paint left over, it will be used up for the family Bible and the canary.

It is claimed for this invention that a little child can make as much mess with it as can a grown-up person, and so all the children of the family are represented in the picture as hard at work, enameling whatever few articles of furniture and household use the grasping selfishness of their elders has spared to them. One is painting the toasting fork in a "skim-milk blue," while another is giving aesthetical value to the Dutch oven by means of a new shade of art green. The bootjack is being renovated in "old gold," and the baby is sitting on the floor, smothering its own cradle with "flush-upon-a-maiden's cheek peach color."

One feels that the thing is being overdone. That family, before another month is gone, will be among the strongest opponents of enamel paint that the century has produced. Enamel paint will be the ruin of that once happy home. Enamel paint has a cold, glassy, cynical appearance. Its presence everywhere about the place will begin to irritate the old man in the course of a week or so. He will call it, "This damn'd sticky stuff!" and will tell the wife that he wonders she didn't paint herself and the children with it while she was about it. She will reply, in an exasperatingly quiet tone of voice, that she does like that. Perhaps he will say next, that she did not warn him against it, and tell him what an idiot he was making of himself, spoiling the whole house with his foolish fads. Each one will persist that it was the other one who first suggested the absurdity, and they will sit up in bed and quarrel about it every night for a month.

The children having acquired a taste for smudging the concoction about, and there being nothing else left untouched in the house, will try to enamel the cat; and then there will be bloodshed, and broken windows, and spoiled infants, and sorrows and yells. The smell of the paint will make everybody ill; and the servants will give notice. Tradesmen's boys will lean up against places that are not dry and get their clothes enameled and claim compensation. And the baby will suck the paint off its cradle and have fits.