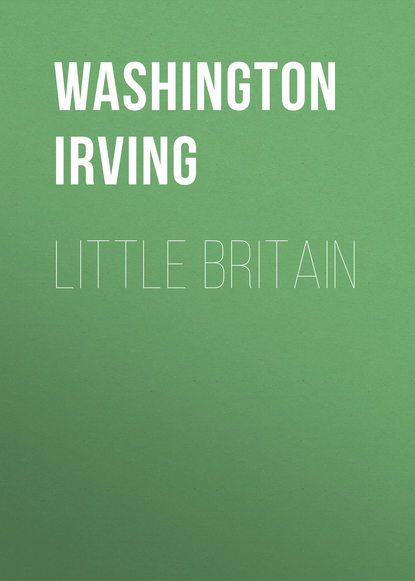 What I write is most true… I have a whole booke of cases lying by me which if I should sette foorth, some grave auntients (within the hearing of Bow bell) would be out of charity with me. – NASHE.

In the centre of the great city of London lies a small neighborhood, consisting of a cluster of narrow streets and courts, of very venerable and debilitated houses, which goes by the name of LITTLE BRITAIN. Christ Church School and St. Bartholomew’s Hospital bound it on the west; Smithfield and Long Lane on the north; Aldersgate Street, like an arm of the sea, divides it from the eastern part of the city; whilst the yawning gulf of Bull-and-Mouth Street separates it from Butcher Lane, and the regions of Newgate. Over this little territory, thus bounded and designated, the great dome of St. Paul’s, swelling above the intervening houses of Paternoster Row, Amen Corner, and Ave Maria Lane, looks down with an air of motherly protection.

This quarter derives its appellation from having been, in ancient times, the residence of the Dukes of Brittany. As London increased, however, rank and fashion rolled off to the west, and trade, creeping on at their heels, took possession of their deserted abodes. For some time Little Britain became the great mart of learning, and was peopled by the busy and prolific race of booksellers; these also gradually deserted it, and, emigrating beyond the great strait of Newgate Street, settled down in Paternoster Row and St. Paul’s Churchyard, where they continue to increase and multiply even at the present day.

But though thus falling into decline, Little Britain still bears traces of its former splendor. There are several houses ready to tumble down, the fronts of which are magnificently enriched with old oaken carvings of hideous faces, unknown birds, beasts, and fishes; and fruits and flowers which it would perplex a naturalist to classify. There are also, in Aldersgate Street, certain remains of what were once spacious and lordly family mansions, but which have in latter days been subdivided into several tenements. Here may often be found the family of a petty tradesman, with its trumpery furniture, burrowing among the relics of antiquated finery, in great, rambling, time-stained apartments, with fretted ceilings, gilded cornices, and enormous marble fireplaces. The lanes and courts also contain many smaller houses, not on so grand a scale, but, like your small ancient gentry, sturdily maintaining their claims to equal antiquity. These have their gable ends to the street; great bow-windows, with diamond panes set in lead, grotesque carvings, and low arched door-ways.

In this most venerable and sheltered little nest have I passed several quiet years of existence, comfortably lodged in the second floor of one of the smallest but oldest edifices. My sitting-room is an old wainscoted chamber, with small panels, and set off with a miscellaneous array of furniture. I have a particular respect for three or four high-backed claw-footed chairs, covered with tarnished brocade, which bear the marks of having seen better days, and have doubtless figured in some of the old palaces of Little Britain. They seem to me to keep together, and to look down with sovereign contempt upon their leathern-bottomed neighbors: as I have seen decayed gentry carry a high head among the plebeian society with which they were reduced to associate. The whole front of my sitting-room is taken up with a bow-window, on the panes of which are recorded the names of previous occupants for many generations, mingled with scraps of very indifferent gentlemanlike poetry, written in characters which I can scarcely decipher, and which extol the charms of many a beauty of Little Britain who has long, long since bloomed, faded, and passed away. As I am an idle personage, with no apparent occupation, and pay my bill regularly every week, I am looked upon as the only independent gentleman of the neighborhood; and, being curious to learn the internal state of a community so apparently shut up within itself, I have managed to work my way into all the concerns and secrets of the place.

Little Britain may truly be called the heart’s core of the city; the stronghold of true John Bullism. It is a fragment of London as it was in its better days, with its antiquated folks and fashions. Here flourish in great preservation many of the holiday games and customs of yore. The inhabitants most religiously eat pancakes on Shrove Tuesday, hot-cross-buns on Good Friday, and roast goose at Michaelmas; they send love-letters on Valentine’s Day, burn the pope on the fifth of November, and kiss all the girls under the mistletoe at Christmas. Roast beef and plum pudding are also held in superstitious veneration, and port and sherry maintain their grounds as the only true English wines; all others being considered vile, outlandish beverages.

Little Britain has its long catalogue of city wonders, which its inhabitants consider the wonders of the world: such as the great bell of St. Paul’s, which sours all the beer when it tolls; the figures that strike the hours at St. Dunstan’s clock; the Monument; the lions in the Tower; and the wooden giants in Guildhall. They still believe in dreams and fortune-telling, and an old woman that lives in Bull-and-Mouth Street makes a tolerable subsistence by detecting stolen goods, and promising the girls good husbands. They are apt to be rendered uncomfortable by comets and eclipses; and if a dog howls dolefully at night, it is looked upon as a sure sign of a death in the place. There are even many ghost stories current, particularly concerning the old mansion-houses; in several of which it is said strange sights are sometimes seen. Lords and ladies, the former in full bottomed wigs, hanging sleeves, and swords, the latter in lappets, stays, hoops and brocade, have been seen walking up and down the great waste chambers, on moonlight nights; and are supposed to be the shades of the ancient proprietors in their court-dresses.

Little Britain has likewise its sages and great men. One of the most important of the former is a tall, dry old gentleman, of the name of Skryme, who keeps a small apothecary’s shop. He has a cadaverous countenance, full of cavities and projections; with a brown circle round each eye, like a pair of horned spectacles. He is much thought of by the old women, who consider him a kind of conjurer, because he has two of three stuffed alligators hanging up in his shop, and several snakes in bottles. He is a great reader of almanacs and newspapers, and is much given to pore over alarming accounts of plots, conspiracies, fires, earthquakes, and volcanic eruptions; which last phenomena he considers as signs of the times. He has always some dismal tale of the kind to deal out to his customers, with their doses; and thus at the same time puts both soul and body into an uproar. He is a great believer in omens and predictions; and has the prophecies of Robert Nixon and Mother Shipton by heart. No man can make so much out of an eclipse, or even an unusually dark day; and he shook the tail of the last comet over the heads of his customers and disciples until they were nearly frightened out of their wits. He has lately got hold of a popular legend or prophecy, on which he has been unusually eloquent. There has been a saying current among the ancient sibyls, who treasure up these things, that when the grasshopper on the top of the Exchange shook hands with the dragon on the top of Bow Church Steeple, fearful events would take place. This strange conjunction, it seems, has as strangely come to pass. The same architect has been engaged lately on the repairs of the cupola of the Exchange, and the steeple of Bow church; and, fearful to relate, the dragon and the grasshopper actually lie, cheek by jole, in the yard of his workshop.