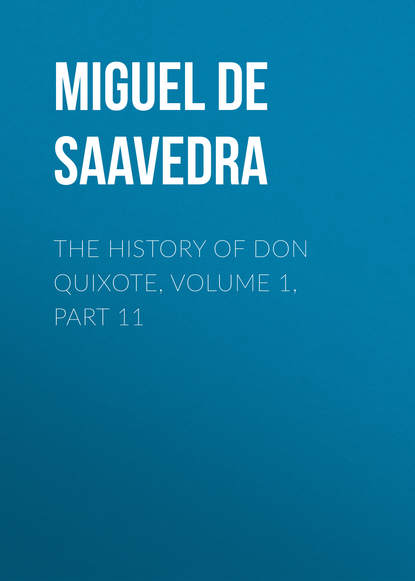 "Such, sirs, is the true story of my sad adventures; judge for yourselves now whether the sighs and lamentations you heard, and the tears that flowed from my eyes, had not sufficient cause even if I had indulged in them more freely; and if you consider the nature of my misfortune you will see that consolation is idle, as there is no possible remedy for it. All I ask of you is, what you may easily and reasonably do, to show me where I may pass my life unharassed by the fear and dread of discovery by those who are in search of me; for though the great love my parents bear me makes me feel sure of being kindly received by them, so great is my feeling of shame at the mere thought that I cannot present myself before them as they expect, that I had rather banish myself from their sight for ever than look them in the face with the reflection that they beheld mine stripped of that purity they had a right to expect in me."

With these words she became silent, and the colour that overspread her face showed plainly the pain and shame she was suffering at heart. In theirs the listeners felt as much pity as wonder at her misfortunes; but as the curate was just about to offer her some consolation and advice Cardenio forestalled him, saying, "So then, senora, you are the fair Dorothea, the only daughter of the rich Clenardo?" Dorothea was astonished at hearing her father's name, and at the miserable appearance of him who mentioned it, for it has been already said how wretchedly clad Cardenio was; so she said to him:

"And who may you be, brother, who seem to know my father's name so well? For so far, if I remember rightly, I have not mentioned it in the whole story of my misfortunes."

"I am that unhappy being, senora," replied Cardenio, "whom, as you have said, Luscinda declared to be her husband; I am the unfortunate Cardenio, whom the wrong-doing of him who has brought you to your present condition has reduced to the state you see me in, bare, ragged, bereft of all human comfort, and what is worse, of reason, for I only possess it when Heaven is pleased for some short space to restore it to me. I, Dorothea, am he who witnessed the wrong done by Don Fernando, and waited to hear the 'Yes' uttered by which Luscinda owned herself his betrothed: I am he who had not courage enough to see how her fainting fit ended, or what came of the paper that was found in her bosom, because my heart had not the fortitude to endure so many strokes of ill-fortune at once; and so losing patience I quitted the house, and leaving a letter with my host, which I entreated him to place in Luscinda's hands, I betook myself to these solitudes, resolved to end here the life I hated as if it were my mortal enemy. But fate would not rid me of it, contenting itself with robbing me of my reason, perhaps to preserve me for the good fortune I have had in meeting you; for if that which you have just told us be true, as I believe it to be, it may be that Heaven has yet in store for both of us a happier termination to our misfortunes than we look for; because seeing that Luscinda cannot marry Don Fernando, being mine, as she has herself so openly declared, and that Don Fernando cannot marry her as he is yours, we may reasonably hope that Heaven will restore to us what is ours, as it is still in existence and not yet alienated or destroyed. And as we have this consolation springing from no very visionary hope or wild fancy, I entreat you, senora, to form new resolutions in your better mind, as I mean to do in mine, preparing yourself to look forward to happier fortunes; for I swear to you by the faith of a gentleman and a Christian not to desert you until I see you in possession of Don Fernando, and if I cannot by words induce him to recognise his obligation to you, in that case to avail myself of the right which my rank as a gentleman gives me, and with just cause challenge him on account of the injury he has done you, not regarding my own wrongs, which I shall leave to Heaven to avenge, while I on earth devote myself to yours."

Cardenio's words completed the astonishment of Dorothea, and not knowing how to return thanks for such an offer, she attempted to kiss his feet; but Cardenio would not permit it, and the licentiate replied for both, commended the sound reasoning of Cardenio, and lastly, begged, advised, and urged them to come with him to his village, where they might furnish themselves with what they needed, and take measures to discover Don Fernando, or restore Dorothea to her parents, or do what seemed to them most advisable. Cardenio and Dorothea thanked him, and accepted the kind offer he made them; and the barber, who had been listening to all attentively and in silence, on his part some kindly words also, and with no less good-will than the curate offered his services in any way that might be of use to them. He also explained to them in a few words the object that had brought them there, and the strange nature of Don Quixote's madness, and how they were waiting for his squire, who had gone in search of him. Like the recollection of a dream, the quarrel he had had with Don Quixote came back to Cardenio's memory, and he described it to the others; but he was unable to say what the dispute was about.

At this moment they heard a shout, and recognised it as coming from Sancho Panza, who, not finding them where he had left them, was calling aloud to them. They went to meet him, and in answer to their inquiries about Don Quixote, he told them how he had found him stripped to his shirt, lank, yellow, half dead with hunger, and sighing for his lady Dulcinea; and although he had told him that she commanded him to quit that place and come to El Toboso, where she was expecting him, he had answered that he was determined not to appear in the presence of her beauty until he had done deeds to make him worthy of her favour; and if this went on, Sancho said, he ran the risk of not becoming an emperor as in duty bound, or even an archbishop, which was the least he could be; for which reason they ought to consider what was to be done to get him away from there. The licentiate in reply told him not to be uneasy, for they would fetch him away in spite of himself. He then told Cardenio and Dorothea what they had proposed to do to cure Don Quixote, or at any rate take him home; upon which Dorothea said that she could play the distressed damsel better than the barber; especially as she had there the dress in which to do it to the life, and that they might trust to her acting the part in every particular requisite for carrying out their scheme, for she had read a great many books of chivalry, and knew exactly the style in which afflicted damsels begged boons of knights-errant.