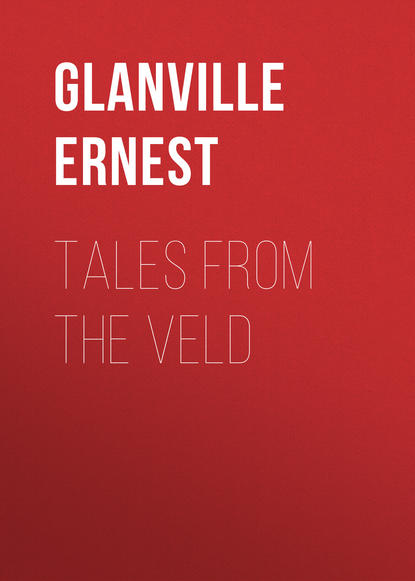 Ernest Glanville
Tales from the Veld

Tales from the Veld
Ernest Glanville

Tales from the Veld

The tales here set forth are, subject to a generous allowance for Uncle Abe’s gift of imagination, true to the animal life and the scenery of a district in the Cape occupied by the British Settlers of 1820 – a tract rich in incidents of border warfare, hallowed by the struggles of that early band of colonists, saturated with the superstitions and folk lore of the Kaffirs, and thoroughly familiar to the author – who passed his boyhood there.

Abe Pike – Old Abe Pike, or Uncle Abe as he was variously called – lived in a one-horse shanty in the division of Albany, Cape Colony. I won’t locate his farm, for various reasons, beyond saying that there is a solitary blue-gum on the south side of the house and the rudiments of a cowshed on the north. Uncle Abe was not ambitious; he was slow, but he was sure. So he said. One blue-gum satisfied him, and as for the cowshed he meant to complete it during the century. I don’t introduce him as a tree planter, but as a narrator of most extraordinary yarns. He called them facts – but of the truth of this the reader may judge.

Riding over one warm afternoon, I found him leaning over a water-butt examining the little lively and red worms therein, which would soon hatch out into livelier mosquitoes.

Uncle Abe took a very old pipe from his pocket, and showed the emptiness of it by placing a very gnarled little finger into the black bowl.

I held out my pouch.

“I’ll jest take a little dry to put on the top,” he said, as he deliberately filled the pipe. “We want a little ‘dry on the top’ to start us, but if there’s nothin’ deown below, why, it’s a puff and out it goes. Yo’ll never get a crop from that bottom land o’ yours until you put some dry on the top in the shape of manure. See!”

Now, of all the laziest, shiftless beings there was no one who could start level with old Abe Pike, and this advice from him was rasping, but still he had his points.

“It depends on how you interpret them.”

“Well, that’s so. I’ve got a portent here in this very coat; that’s some small pumpkins, I tell you. It’ll kill any sort o’ vermin, rats, skeeters, wild-cats, jackals, quicker’n winkin’. See! I found it out myself come next Friday fortnight.”

“You mean you interpreted the portent.”

“That’s my portent. I diskivered it, and I’m gwine to work it under my name – Abe Pike’s Sure Killer.”

“Is it a patent medicine you’re talking of?”

“Of course; that’s what I said. There it is,” and out of his pocket he produced a strip of bark.

“Looks like it, don’t it? But there’s bark and there’s bark. This is Abe Pike’s Bark, possessing properties which will alleviate the sufferings of the human race by putting a lightning end to the enemies of the human kind. That’s what I’ve studied out to put in the papers in big letters. There’s money in it, now; ain’t there?”

“Ah! the limitations of knowledge, my boy, is accountable for a pot of ignorance. You think that’s plain ordinary bark, but that’s where your limitations run dry. I’ll jes’ tell you how I diskivered this great and marvellous killer of the centry. Come Friday fortnight I sot out with the axe to chop out a pole for the cowshed – t’other on’ been eaten thro’ by those plaguy ants. Well, I knew of a tree way down in the kloof that had been growin’ for that shed o’ mine ever since the seed dropped on the ’xact spot where nature had provided a bed for it. When you come to think of it, everything has got its purpose all smoothed out from the start, and that little seed spread itself out from the beginnin’ to build up a pole for ole Abe Pike’s cowshed. I sot down on a fallen tree and thought that all out, while the trees round about made a whisperin’ with their leaves over the head o’ that there sneeze ’ood that was doomed so to speak, by reason o’ my cows, and the necessity of keepin’ ’em out o’ the rain in the winter. Well, I sot there thinking all these thoughts until it was too dark, and I went away home ’thout having cut the tree. Next mornin’ I took up my axe and went down into the kloof and took off my coat. I gave two blows and stopped.”

“Jes’ you wait. I tole you there was a fallen tree; well, in that tree was a snake. The first blow of the axe woke him, and he popped his head out. The second blow sent a chip that hit him square between the eyes. Out he came biling with rage, and hissin’ like a kettle o’ water, and I just had time to dodge behind the tree when he let out. His fangs stuck right in the wood, and with a clip I cut his head off. I stood away back looking at his writhing body and at his wicked head sticking there in the tree jes’ where I had made the wedge. As I looked in, there came to pass a remarkable circumstance.”

“Yes; that tree began to lose colour. It was a healthy tree, sound as a bell, with a heart o’ iron and a crown o’ green leaves; but as I stood there in the space o’ maybe one minit, or a minit and a half, it begun to turn pale and sickly.”

“Yes, sir, that’s what I said. First the leaves shuddered and rustled, and grew moist; then they slowly turned yeller, curling up as if they’d been frost-bitten, only sadder. It s’prised me, that did, for there was somethin’ in the way the leaves went that struck a shudder through me, ’twas so human like in the manner o’ it. But that was nothing – the bark suddenly cracked and peeled off – then the white trunk itself standin’ there, exposed in its nakedness began to swell – until it split with a groan – ay, a groan, a moaning shivery gasp o’ pain. ’Twas so like life, I turned and ran, thinkin’ that dead snakes was after me – so that as I ran the fear grew upon me till I came out inter the open. After looking around keerfully I sat on a stone an’ steadied my thinking machine. When I got the fear out o’ me I went back and there was that tree dead as tho’ it had been struck by lightnin’ and bleached by the rain an’ sun.”

“That tree was pisened! It died o’ snakebite – its system chock full o’ pisen. I cut it down and took it home, where I planted it under the shed.”

“I’m comin’ to that, if you’ll give me time. That night I couldn’t sleep for a procession of ants. They came out of a hole in the floor, crept over my bed – which you may know is on the floor for convenience – and marched out thro’ the crack under the door. All the ants in the country were there – red ants, black ants, working ants, soldier ants, and the soldier ants nipped me whenever I moved. In the morning, when they had passed away, I went outside, and in the shed there was thousands an’ thousands o’ dead ants, not to speak o’ flies.”

“They had been nipping that pisened pole, and those that didn’t bite got the news and moved off for other scenes. I tell you, you may speak o’ telegraph wires, but lor’ bless you, news travels faster among the creatures. Why I’ve knowed – ”

“Yes; but you’ve not told me about your discovery.”

“Well, now, the limitations of your knowledge is great. I’ve told you enough to put two and two together. If not, I’ll just make the plain plainer. Seeing what the tree had done, I though o’ the bark an’ the leaves left there behind in the kloof, and went for ’em. It was jus’ as I thought. They was deadly pisen, and when I laid some leaves about the house they killed all the flies, and a piece o’ bark laid in a rat-hole brought all the rats out corpses.

“Yes sir, that’s ole Abe Pike’s Vermin Destroyer, and if you’re setting pills for jackals, why, don’t you forget to come to my shop.”

“Are you opening a shop?”

“That’s what I said. Abe Pike’s vermin pisen poles, warrented to stand the ravages o’ time an’ insects, and Pike’s bark; no other genuine. So long!”