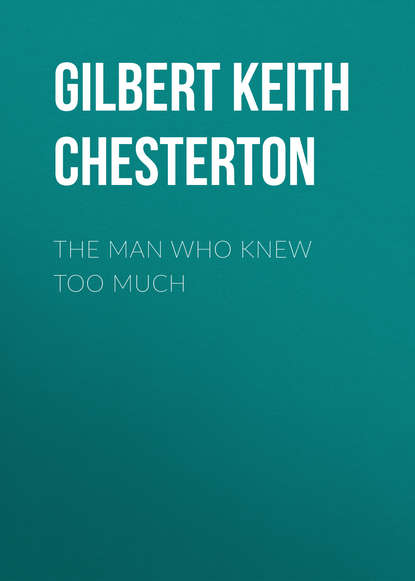 
"No, no, Mr. Wilson," cried Fisher, suddenly. "You shall not commit a third murder."

Sir Walter Carey rose from his chair, which fell over with a crash behind him. "What does all this mean?" he called out in an authoritative manner.

"It means," said Fisher, "that this man, Hooker Wilson, as soon as he had put his head in at that window, killed his two comrades who had put their heads in at the other windows, by firing across the empty room. That is what it means. And if you want to know, count how many times he is supposed to have fired and then count the charges left in his revolver."

Wilson, who was still sitting on the table, abruptly put a hand out for the weapon that lay beside him. But the next movement was the most unexpected of all, for the prince standing in the doorway passed suddenly from the dignity of a statue to the swiftness of an acrobat and rent the revolver out of the detective's hand.

"You dog!" he cried. "So you are the type of English truth, as I am of Irish tragedy – you who come to kill me, wading through the blood of your brethren. If they had fallen in a feud on the hillside, it would be called murder, and yet your sin might be forgiven you. But I, who am innocent, I was to be slain with ceremony. There would be long speeches and patient judges listening to my vain plea of innocence, noting down my despair and disregarding it. Yes, that is what I call assassination. But killing may be no murder; there is one shot left in this little gun, and I know where it should go."

Wilson turned quickly on the table, and even as he turned he twisted in agony, for Michael shot him through the body where he sat, so that he tumbled off the table like lumber.

The police rushed to lift him; Sir Walter stood speechless; and then, with a strange and weary gesture, Horne Fisher spoke.

"You are indeed a type of the Irish tragedy," he said. "You were entirely in the right, and you have put yourself in the wrong."

The prince's face was like marble for a space then there dawned in his eyes a light not unlike that of despair. He laughed suddenly and flung the smoking pistol on the ground.

"I am indeed in the wrong," he said. "I have committed a crime that may justly bring a curse on me and my children."

Horne Fisher did not seem entirely satisfied with this very sudden repentance; he kept his eyes on the man and only said, in a low voice, "What crime do you mean?"

"I have helped English justice," replied Prince Michael. "I have avenged your king's officers; I have done the work of his hangman. For that truly I deserve to be hanged."

And he turned to the police with a gesture that did not so much surrender to them, but rather command them to arrest him.

This was the story that Horne Fisher told to Harold March, the journalist, many years after, in a little, but luxurious, restaurant near Piccadilly. He had invited March to dinner some time after the affair he called "The Face in the Target," and the conversation had naturally turned on that mystery and afterward on earlier memories of Fisher's life and the way in which he was led to study such problems as those of Prince Michael. Horne Fisher was fifteen years older; his thin hair had faded to frontal baldness, and his long, thin hands dropped less with affectation and more with fatigue. And he told the story of the Irish adventure of his youth, because it recorded the first occasion on which he had ever come in contact with crime, or discovered how darkly and how terribly crime can be entangled with law.

"Hooker Wilson was the first criminal I ever knew, and he was a policeman," explained Fisher, twirling his wine glass. "And all my life has been a mixed-up business of the sort. He was a man of very real talent, and perhaps genius, and well worth studying, both as a detective and a criminal. His white face and red hair were typical of him, for he was one of those who are cold and yet on fire for fame; and he could control anger, but not ambition. He swallowed the snubs of his superiors in that first quarrel, though he boiled with resentment; but when he suddenly saw the two heads dark against the dawn and framed in the two windows, he could not miss the chance, not only of revenge, but of the removal of the two obstacles to his promotion. He was a dead shot and counted on silencing both, though proof against him would have been hard in any case. But, as a matter of fact, he had a narrow escape, in the case of Nolan, who lived just long enough to say, 'Wilson' and point. We thought he was summoning help for his comrade, but he was really denouncing his murderer. After that it was easy to throw down the ladder above him (for a man up a ladder cannot see clearly what is below and behind) and to throw himself on the ground as another victim of the catastrophe.