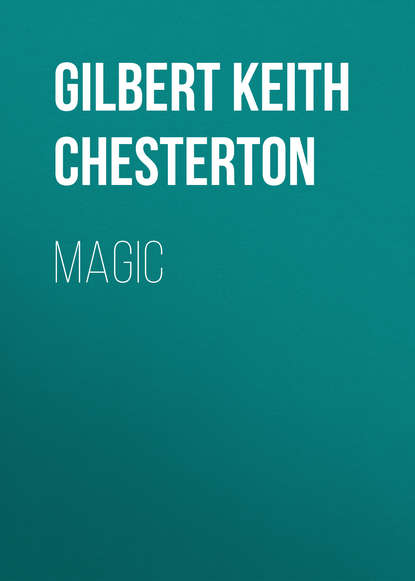 
Morris. [Humorously, as he puts in his head at the window.] See here, does a Duke live here?

Doctor. [Who is nearest to him, with great gravity.] Yes, only one.

Morris. I reckon he's the one I want, anyhow. I'm his nephew.

[The Duke, who is ruminating in the foreground, with one eye rather off, turns at the voice and shakes Morris warmly by the hand.

Duke. Delighted to see you, my dear boy. I hear you've been doing very well for yourself.

Morris. [Laughing.] Well, pretty well, Duke; and better still for Paul T. Vandam, I guess. I manage the old man's mines out in Arizona, you know.

Duke. [Shaking his head sagaciously.] Ah, very go-ahead man! Very go-ahead methods, I'm told. Well, I dare say he does a great deal of good with his money. And we can't go back to the Spanish Inquisition.

[Silence, during which the three men look at each other.

[There is a slightly embarrassed pause, and the Doctor speaks.

Doctor. Miss Carleon is walking about the grounds, I think.

[Morris goes to the garden doors and looks out.

Morris. It's a mighty chilly night to choose. Does my sister commonly select such evenings to take the air – and the damp?

Doctor. [After a pause.] If I may say so, I quite agree with you. I have often taken the liberty of warning your sister against going out in all weathers like this.

Duke. [Expansively waving his hands about.] The artist temperament! What I always call the artistic temperament! Wordsworth, you know, and all that.

Morris. [Staring.] All what?

Morris. [Advancing excitedly.] Somebody there! What do you mean?

Duke. Well, as old Buffle used to say, what is a man?

Morris. [With a strong rise of the American accent.] With your permission, Duke, I eliminate old Buffle. Do you mean that anybody has had the tarnation coolness to suggest that some man…

Duke. Oh, not a man, you know. A magician, something mythical, you know.

Smith. Not a man, but a medicine man.

Doctor. [Grimly.] I am a medicine man.

[He bites his finger and begins to pace restlessly up and down the room.

Morris. [Turning suddenly.] See here, Duke! In most commercial ways we're a pretty forward country. In these moral ways we're content to be a pretty backward country. And if you ask me whether I like my sister walking about the woods on a night like this! Well, I don't.

Duke. I am afraid you Americans aren't so advanced as I'd hoped. Why! as old Buffle used to say…

[As he speaks a distant voice is heard singing in the garden; it comes nearer and nearer, and Smith turns suddenly to the Doctor.

Smith. Whose voice is that?

Doctor. It is no business of mine to decide!

Morris. [Walking to the window.] You need not trouble. I know who it is.

[Still agitated.] Patricia, where have you been?

Patricia. [Rather wearily.] Oh! in Fairyland.

Doctor. [Genially.] And whereabouts is that?

Patricia. It's rather different from other places. It's either nowhere or it's wherever you are.

Morris. [Sharply.] Has it any inhabitants?

Patricia. Generally only two. Oneself and one's shadow. But whether he is my shadow or I am his shadow is never found out.

Patricia. [Seeming to understand his annoyance for the first time, and smiling.] Oh, you needn't get conventional about it, Morris. He is not a mortal.

Patricia. We have no names there. You never really know anybody if you know his name.