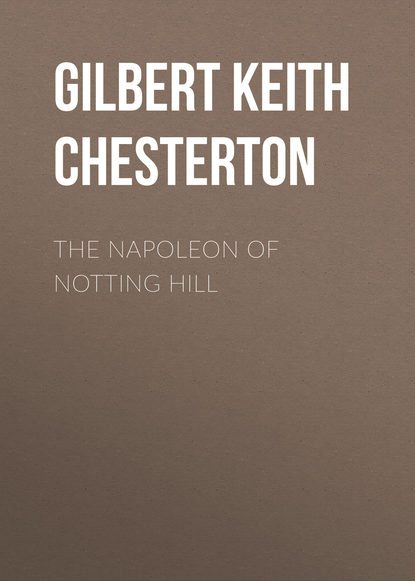 Auberon did so with a bound, and flinging his hat higher than the trees, proceeded to hop about on one leg with a serious expression. Barker stamped wildly.

"Oh, let's get home, Barker, and leave him," said Lambert; "some of your proper and correct police will look after him. Here they come!"

Two grave-looking men in quiet uniforms came up the hill towards them. One held a paper in his hand.

"There he is, officer," said Lambert, cheerfully; "we ain't responsible for him."

The officer looked at the capering Mr. Quin with a quiet eye.

"We have not come, gentlemen," he said, "about what I think you are alluding to. We have come from head-quarters to announce the selection of His Majesty the King. It is the rule, inherited from the old régime, that the news should be brought to the new Sovereign immediately, wherever he is; so we have followed you across Kensington Gardens."

Barker's eyes were blazing in his pale face. He was consumed with ambition throughout his life. With a certain dull magnanimity of the intellect he had really believed in the chance method of selecting despots. But this sudden suggestion, that the selection might have fallen upon him, unnerved him with pleasure.

"Which of us," he began, and the respectful official interrupted him.

"Not you, sir, I am sorry to say. If I may be permitted to say so, we know your services to the Government, and should be very thankful if it were. The choice has fallen…"

"God bless my soul!" said Lambert, jumping back two paces. "Not me. Don't say I'm autocrat of all the Russias."

"No, sir," said the officer, with a slight cough and a glance towards Auberon, who was at that moment putting his head between his legs and making a noise like a cow; "the gentleman whom we have to congratulate seems at the moment – er – er – occupied."

"Not Quin!" shrieked Barker, rushing up to him; "it can't be. Auberon, for God's sake pull yourself together. You've been made King!"

With his head still upside down between his legs, Mr. Quin answered modestly —

"I am not worthy. I cannot reasonably claim to equal the great men who have previously swayed the sceptre of Britain. Perhaps the only peculiarity that I can claim is that I am probably the first monarch that ever spoke out his soul to the people of England with his head and body in this position. This may in some sense give me, to quote a poem that I wrote in my youth —

A nobler office on the earth
Than valour, power of brain, or birth
Could give the warrior kings of old.

The intellect clarified by this posture – "

Lambert and Barker made a kind of rush at him.

"Don't you understand?" cried Lambert. "It's not a joke. They've really made you King. By gosh! they must have rum taste."

"The great Bishops of the Middle Ages," said Quin, kicking his legs in the air, as he was dragged up more or less upside down, "were in the habit of refusing the honour of election three times and then accepting it. A mere matter of detail separates me from those great men. I will accept the post three times and refuse it afterwards. Oh! I will toil for you, my faithful people! You shall have a banquet of humour."

By this time he had been landed the right way up, and the two men were still trying in vain to impress him with the gravity of the situation.

"Did you not tell me, Wilfrid Lambert," he said, "that I should be of more public value if I adopted a more popular form of humour? And when should a popular form of humour be more firmly riveted upon me than now, when I have become the darling of a whole people? Officer," he continued, addressing the startled messenger, "are there no ceremonies to celebrate my entry into the city?"

"Ceremonies," began the official, with embarrassment, "have been more or less neglected for some little time, and – "

Auberon Quin began gradually to take off his coat.

"All ceremony," he said, "consists in the reversal of the obvious. Thus men, when they wish to be priests or judges, dress up like women. Kindly help me on with this coat." And he held it out.

"But, your Majesty," said the officer, after a moment's bewilderment and manipulation, "you're putting it on with the tails in front."

"The reversal of the obvious," said the King, calmly, "is as near as we can come to ritual with our imperfect apparatus. Lead on."

The rest of that afternoon and evening was to Barker and Lambert a nightmare, which they could not properly realise or recall. The King, with his coat on the wrong way, went towards the streets that were awaiting him, and the old Kensington Palace which was the Royal residence. As he passed small groups of men, the groups turned into crowds, and gave forth sounds which seemed strange in welcoming an autocrat. Barker walked behind, his brain reeling, and, as the crowds grew thicker and thicker, the sounds became more and more unusual. And when he had reached the great market-place opposite the church, Barker knew that he had reached it, though he was roods behind, because a cry went up such as had never before greeted any of the kings of the earth.

Chapter I – The Charter of the Cities

Lambert was standing bewildered outside the door of the King's apartments amid the scurry of astonishment and ridicule. He was just passing out into the street, in a dazed manner, when James Barker dashed by him.

"Where are you going?" he asked.

"To stop all this foolery, of course," replied Barker; and he disappeared into the room.

He entered it headlong, slamming the door, and slapping his incomparable silk hat on the table. His mouth opened, but before he could speak, the King said —

Fidgetting with his fingers, and scarcely knowing what he was doing, the young politician held it out.

The King placed it on his own chair, and sat on it.

"A quaint old custom," he explained, smiling above the ruins. "When the King receives the representatives of the House of Barker, the hat of the latter is immediately destroyed in this manner. It represents the absolute finality of the act of homage expressed in the removal of it. It declares that never until that hat shall once more appear upon your head (a contingency which I firmly believe to be remote) shall the House of Barker rebel against the Crown of England."

"Your jokes," he began, "and my property – " and then exploded with an oath, and stopped again.

"What does it all mean?" cried the other, with a gesture of passionate rationality. "Are you mad?"

"Not in the least," replied the King, pleasantly. "Madmen are always serious; they go mad from lack of humour. You are looking serious yourself, James."

"Why can't you keep it to your own private life?" expostulated the other. "You've got plenty of money, and plenty of houses now to play the fool in, but in the interests of the public – "

"Epigrammatic," said the King, shaking his finger sadly at him. "None of your daring scintillations here. As to why I don't do it in private, I rather fail to understand your question. The answer is of comparative limpidity. I don't do it in private, because it is funnier to do it in public. You appear to think that it would be amusing to be dignified in the banquet hall and in the street, and at my own fireside (I could procure a fireside) to keep the company in a roar. But that is what every one does. Every one is grave in public, and funny in private. My sense of humour suggests the reversal of this; it suggests that one should be funny in public, and solemn in private. I desire to make the State functions, parliaments, coronations, and so on, one roaring old-fashioned pantomime. But, on the other hand, I shut myself up alone in a small store-room for two hours a day, where I am so dignified that I come out quite ill."

By this time Barker was walking up and down the room, his frock coat flapping like the black wings of a bird.

"Well, you will ruin the country, that's all," he said shortly.

"It seems to me," said Auberon, "that the tradition of ten centuries is being broken, and the House of Barker is rebelling against the Crown of England. It would be with regret (for I admire your appearance) that I should be obliged forcibly to decorate your head with the remains of this hat, but – "

"What I can't understand," said Barker flinging up his fingers with a feverish American movement, "is why you don't care about anything else but your games."

The King stopped sharply in the act of lifting the silken remnants, dropped them, and walked up to Barker, looking at him steadily.