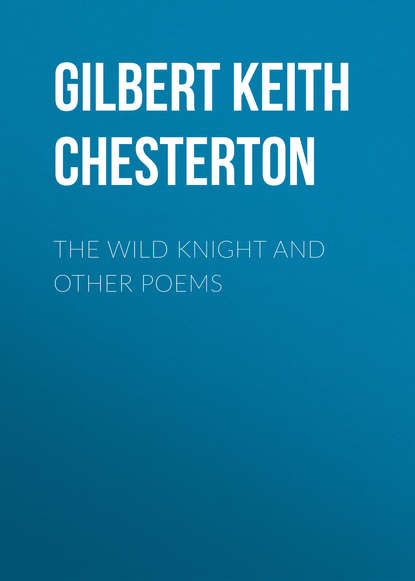 The Wild Knight and Other Poems
Gilbert Chesterton

The Wild Knight and Other Poems

My thanks are due to the Editors of the Outlook and the Speaker for the kind permission they have given me to reprint a considerable number of the following poems. They have been selected and arranged rather with a view to unity of spirit than to unity of time or value; many of them being juvenile.

_Another tattered rhymster in the ring,
With but the old plea to the sneering schools,
That on him too, some secret night in spring
Came the old frenzy of a hundred fools

To make some thing: the old want dark and deep,
The thirst of men, the hunger of the stars,
Since first it tinged even the Eternal's sleep,
With monstrous dreams of trees and towns and mars.

When all He made for the first time He saw,
Scattering stars as misers shake their pelf.
Then in the last strange wrath broke His own law,
And made a graven image of Himself._

BY THE BABE UNBORN

If trees were tall and grasses short,
As in some crazy tale,
If here and there a sea were blue
Beyond the breaking pale,

If a fixed fire hung in the air
To warm me one day through,
If deep green hair grew on great hills,
I know what I should do.

In dark I lie: dreaming that there
Are great eyes cold or kind,
And twisted streets and silent doors,
And living men behind.

Let storm-clouds come: better an hour,
And leave to weep and fight,
Than all the ages I have ruled
The empires of the night.

I think that if they gave me leave
Within that world to stand,
I would be good through all the day
I spent in fairyland.

They should not hear a word from me
Of selfishness or scorn,
If only I could find the door,
If only I were born.

My eyes are full of lonely mirth:
Reeling with want and worn with scars,
For pride of every stone on earth,
I shake my spear at all the stars.

A live bat beats my crest above,
Lean foxes nose where I have trod,
And on my naked face the love
Which is the loneliness of God.

Outlawed: since that great day gone by —
When before prince and pope and queen
I stood and spoke a blasphemy —
'Behold the summer leaves are green.'

They cursed me: what was that to me
Who in that summer darkness furled,
With but an owl and snail to see,
Had blessed and conquered all the world?

They bound me to the scourging-stake,
They laid their whips of thorn on me;
I wept to see the green rods break,
Though blood be beautiful to see.

Beneath the gallows' foot abhorred
The crowds cry 'Crucify!' and 'Kill!'
Higher the priests sing, 'Praise the Lord,
The warlock dies'; and higher still

Shall heaven and earth hear one cry sent
Even from the hideous gibbet height,
'Praise to the Lord Omnipotent,
The vultures have a feast to-night.'

Chattering finch and water-fly
Are not merrier than I;
Here among the flowers I lie