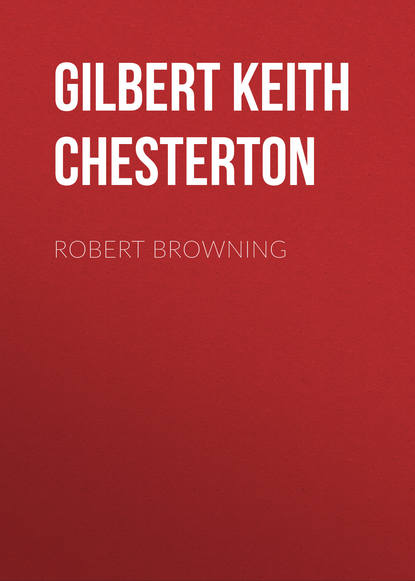 
There is one other point about Pippa Passes which is worth a moment's attention. The great difficulty with regard to the understanding of Browning is the fact that, to all appearance, scarcely any one can be induced to take him seriously as a literary artist. His adversaries consider his literary vagaries a disqualification for every position among poets; and his admirers regard those vagaries with the affectionate indulgence of a circle of maiden aunts towards a boy home for the holidays. Browning is supposed to do as he likes with form, because he had such a profound scheme of thought. But, as a matter of fact, though few of his followers will take Browning's literary form seriously, he took his own literary form very seriously. Now Pippa Passes is, among other things, eminently remarkable as a very original artistic form, a series of disconnected but dramatic scenes which have only in common the appearance of one figure. For this admirable literary departure Browning, amid all the laudations of his "mind" and his "message," has scarcely ever had credit. And just as we should, if we took Browning seriously as a poet, see that he had made many noble literary forms, so we should also see that he did make from time to time certain definite literary mistakes. There is one of them, a glaring one, in Pippa Passes; and, as far as I know, no critic has ever thought enough of Browning as an artist to point it out. It is a gross falsification of the whole beauty of Pippa Passes to make the Monseigneur and his accomplice in the last act discuss a plan touching the fate of Pippa herself. The whole central and splendid idea of the drama is the fact that Pippa is utterly remote from the grand folk whose lives she troubles and transforms. To make her in the end turn out to be the niece of one of them, is like a whiff from an Adelphi melodrama, an excellent thing in its place, but destructive of the entire conception of Pippa. Having done that, Browning might just as well have made Sebald turn out to be her long lost brother, and Luigi a husband to whom she was secretly married. Browning made this mistake when his own splendid artistic power was only growing, and its merits and its faults in a tangle. But its real literary merits and its real literary faults have alike remained unrecognised under the influence of that unfortunate intellectualism which idolises Browning as a metaphysician and neglects him as a poet. But a better test was coming. Browning's poetry, in the most strictly poetical sense, reached its flower in Dramatic Lyrics, published in 1842. Here he showed himself a picturesque and poignant artist in a wholly original manner. And the two main characteristics of the work were the two characteristics most commonly denied to Browning, both by his opponents and his followers, passion and beauty; but beauty had enlarged her boundaries in new modes of dramatic arrangement, and passion had found new voices in fantastic and realistic verse. Those who suppose Browning to be a wholly philosophic poet, number a great majority of his commentators. But when we come to look at the actual facts, they are strangely and almost unexpectedly otherwise.

Let any one who believes in the arrogantly intellectual character of Browning's poetry run through the actual repertoire of the Dramatic Lyrics. The first item consists of those splendid war chants called "Cavalier Tunes." I do not imagine that any one will maintain that there is any very mysterious metaphysical aim in them. The second item is the fine poem "The Lost Leader," a poem which expresses in perfectly lucid and lyrical verse a perfectly normal and old-fashioned indignation. It is the same, however far we carry the query. What theory does the next poem, "How they brought the Good News from Ghent to Aix," express, except the daring speculation that it is often exciting to ride a good horse in Belgium? What theory does the poem after that, "Through the Metidja to Abd-el-Kadr," express, except that it is also frequently exciting to ride a good horse in Africa? Then comes "Nationality in Drinks," a mere technical oddity without a gleam of philosophy; and after that those two entirely exquisite "Garden Fancies," the first of which is devoted to the abstruse thesis that a woman may be charming, and the second to the equally abstruse thesis that a book may be a bore. Then comes "The Soliloquy of the Spanish Cloister," from which the most ingenious "Browning student" cannot extract anything except that people sometimes hate each other in Spain; and then "The Laboratory," from which he could extract nothing except that people sometimes hate each other in France. This is a perfectly honest record of the poems as they stand. And the first eleven poems read straight off are remarkable for these two obvious characteristics – first, that they contain not even a suggestion of anything that could be called philosophy; and second, that they contain a considerable proportion of the best and most typical poems that Browning ever wrote. It may be repeated that either he wrote these lyrics because he had an artistic sense, or it is impossible to hazard even the wildest guess as to why he wrote them.

It is permissible to say that the Dramatic Lyrics represent the arrival of the real Browning of literary history. It is true that he had written already many admirable poems of a far more ambitious plan —Paracelsus with its splendid version of the faults of the intellectual, Pippa Passes with its beautiful deification of unconscious influence. But youth is always ambitious and universal; mature work exhibits more of individuality, more of the special type and colour of work which a man is destined to do. Youth is universal, but not individual. The genius who begins life with a very genuine and sincere doubt whether he is meant to be an exquisite and idolised violinist, or the most powerful and eloquent Prime Minister of modern times, does at last end by making the discovery that there is, after all, one thing, possibly a certain style of illustrating Nursery Rhymes, which he can really do better than any one else. This was what happened to Browning; like every one else, he had to discover first the universe, and then humanity, and at last himself. With him, as with all others, the great paradox and the great definition of life was this, that the ambition narrows as the mind expands. In Dramatic Lyrics he discovered the one thing that he could really do better than any one else – the dramatic lyric. The form is absolutely original: he had discovered a new field of poetry, and in the centre of that field he had found himself.