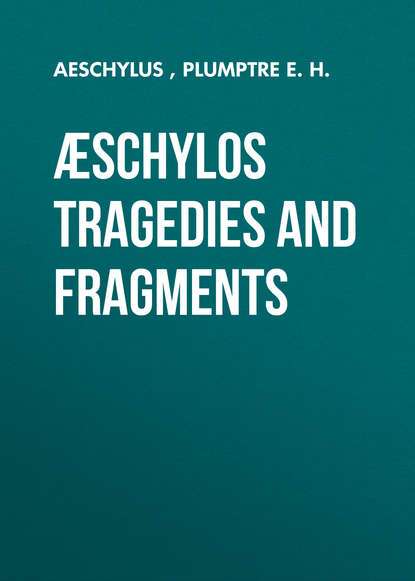 The reception accorded to the pocket edition of Dean Plumptre's “Dante” has encouraged the publishers to issue in the same format the Dean's masterly translation of the Tragedies of Æschylos.

In preparing the present issue they have followed the carefully revised text of the second edition, and have included the scholarly and suggestive annotations with which the Dean invariably delighted to enrich his work as a translator.

The seven Plays, which are all that remain of the seventy or eighty with which Æschylos is credited, are presented in their chronological order. Passages in which the reading or the rendering is more or less conjectural, and in which, accordingly, the aid of the commentator is advisable, are marked by an asterisk; and passages which are regarded as spurious by editors of authority have been placed in brackets.

In translating the Choral Odes the Dean used such unrhymed metres – observing the strophic and antistrophic arrangement – as seemed to him most analogous in their general rhythmical effect to those of the original. He added in an appendix, however, for the sake of those who preferred the rhymed form with which they were familiar, a rhymed version of the chief Odes of the Oresteian trilogy. Those in the other dramas did not appear to him to be of equal interest, or to lend themselves with equal facility to a like attempt. The Greek text on which the translation is based is, for the most part, that of Mr. Paley's edition of 1861.

A translation was also given of the Fragments which have survived the wreck of the lost plays, so that the work contains all that has been left to us associated with the name of Æschylos.

In the present edition a chronological outline has been substituted for the biographical sketch of the poet, who from his daring enlargement of the scope of the drama, the magnificence of his spectacular effects and the splendour of his genius, was rightly honoured as “the Father of Tragedy.”

CHRONOLOGICAL OUTLINE OF THE LIFE OF ÆSCHYLOS

THE PERSIANS[2 - Note.– Within two years after the battle of Salamis, the feeling of natural exultation was met by Phrynichos in a tragedy bearing the title of The Phœnikians, and having for its subject the defeat of Xerxes. As he had come under the displeasure of the Athenian demos for having brought on the stage the sufferings of their Ionian kinsmen in his Capture of Miletos, he was apparently anxious to regain his popularity by a “sensation” drama of another kind; and his success seems to have prompted Æschylos to a like attempt five years later, B.C. 473. The Tetralogy to which the play belonged, and which gained the first prize on its representation, included the two tragedies (unconnected in subject) of Phineus and Glaucos, and the satyric drama of Prometheus the Fire-stealer.The play has, therefore, the interest of being strictly a contemporary narrative of the battle of Salamis and its immediate consequences, by one who may himself have been present at it, and whose brother Ameinias (Herod, viii. 93) distinguished himself in it by a special act of heroism. As such, making all allowance for the influence of dramatic exigencies, and the tendency to colour history so as to meet the tastes of patriotic Athenians, it may claim, where it differs from the story told by Herodotos, to be a more trustworthy record. And it has, we must remember, the interest of being the only extant drama of its class, the only tragedy the subject of which is not taken from the cycle of heroic myths, but from the national history of the time. Far below the Oresteian Trilogy as it may seem to us as a work of art, having more the character of a spectacle than a poem, it was, we may well believe, unusually successful at the time, and it is said to have been chosen by Hiero for reproduction in Syracuse after Æschylos had settled there under his patronage.]

ARGUMENT. – When Xerxes came to the throne of Persia, remembering how his father Dareios had sought to subdue the land of the Hellenes, and seeking to avenge the defeat of Datis and Artaphernes on the field of Marathon, he gathered together a mighty host of all nations under his dominion, and led them against Hellas. And at first he prospered and prevailed, crossed the Hellespont, and defeated the Spartans at Thermopylæ, and took the city of Athens, from which the greater part of its citizens had fled. But at last he and his armament met with utter overthrow at Salamis. Meanwhile Atossa, the mother of Xerxes, with her handmaids and the elders of the Persians, waited anxiously at Susa, where was the palace of the great king, for tidings of her son.

Scene. – Susa, in front of the palace of Xerxes, the tomb

We the title bear of Faithful,[3 - “The Faithful,” or “trusty,” seems to have been a special title of honour given to the veteran councillors of the king (Xenoph. Anab. i. 15), just as that of the “Immortals” was chosen for his body-guard (Herod, vii. 83).]
Friends of Persians gone to Hellas,
Watchers left of treasure city,[4 - Susa was pre-eminently the treasury of the Persian kings (Herod, v. 49; Strabo, xv. p. 731), their favourite residence in spring, as Ecbatana in Media was in summer and Babylon in winter.]
Gold-abounding, whom, as oldest,
Xerxes hath himself appointed,
He, the offspring of Dareios,
As the warders of his country.
And about our king's returning,
And our army's, gold-abounding,
Over-much, and boding evil,
Does my mind within me shudder
(For our whole force, Asia's offspring,
Now is gone), and for our young chief
Sorely frets: nor courier cometh,
Nor any horseman, bringing tidings
To the city of the Persians.
From Ecbatana departing,
Susa, or the Kissian fortress,[5 - Kissia was properly the name of the district in which Susa stood; but here, and in v. 123, it is treated as if it belonged to a separate city. Throughout the play there is, indeed, a lavish use of Persian barbaric names of persons and places, without a very minute regard to historical accuracy.]
Forth they sped upon their journey,
Some in ships, and some on horses,
Some on foot, still onward marching,
In their close array presenting
Squadrons duly armed for battle:
Then Armistres, Artaphernes,
Megabazes, and Astaspes,
Mighty leaders of the Persians,
Kings, and of the great King servants,[6 - Here, as in Herodotos and Greek writers generally, the title, “the King,” or “the great King,” was enough. It could be understood only of the Persian. The latter name had been borne by the kings of Assyria (2 Kings xviii. 28). A little later it passed into the fuller, more boastful form of “The King of kings.”]
March, the chiefs of mighty army.
Archers they and mounted horsemen.
Dread to look on, fierce in battle,
Artembares proud, on horseback,
And Masistres, and Imæos,
Archer famed, and Pharandakes,
And the charioteer Sosthanes.
Neilos mighty and prolific
Sent forth others, Susikanes,
Pegastagon, Egypt's offspring,
And the chief of sacred Memphis;
Great Arsames, Ariomardos,
Ruler of primeval Thebæ,
And the marsh-men,[7 - The inhabitants of the Delta of the Nile, especially those of the marshy districts near the Heracleotic mouth, were famed as supplying the best and bravest soldiers of any part of Egypt. – Comp. Thucyd. i. 110.] and the rowers,
Dread, and in their number countless.
And there follow crowds of Lydians,
Very delicate and stately,[8 - The epithet was applied probably by Æschylos to the Lydians properly so called, the barbaric race with whom the Hellenes had little or nothing in common. They, in dress, diet, mode of life, their distaste for the contests of the arena, seemed to the Greeks the very type of effeminacy. The Ionian Greeks, however, were brought under the same influence, and gradually acquired the same character. The suppression of the name of the Ionians in the list of the Persian forces may be noticed as characteristic. The Athenian poet would not bring before an Athenian audience the shame of their Asiatic kinsmen.]
Who the people of the mainland
Rule throughout – whom Mitragathes
And brave Arkteus, kingly chieftains,
Led, from Sardis, gold-abounding,
Riding on their many chariots,
Three or four a-breast their horses,
Sight to look upon all dreadful.