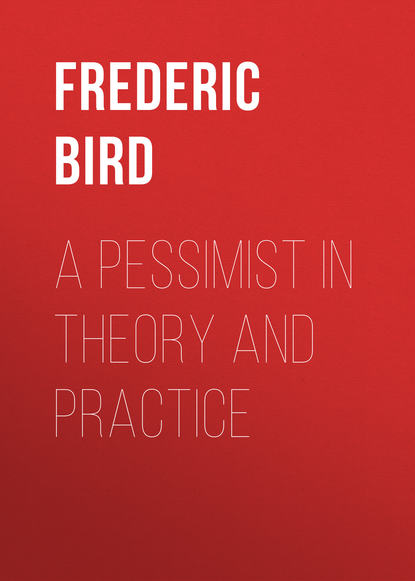 Frederic Bird
A Pessimist in Theory and Practice


We had turned a corner, and come plump on the house; and there on the piazza, two rods away, sat a rare and radiant maiden, playing cat's cradle with my eldest son and heir. I can't tell you how she was dressed; but she was a phantom of delight when thus she broke upon our sight; a lovely apparition, sent to be Jim Hartman's blandishment. At least so it seemed, for he stood there and stared like a noble savage. As when the lightning descends on the giant oak in its primeval solitude – but I must stop this; she is too near, though she pretends not to see us yet. So I whispered in low and warning tones:

"Brace up, Jim. She's not the one you met here twelve years ago, who jilted you at Naples: this one wasn't out of her Fourth Reader then. Don't get them mixed, or be deceived by a chance resemblance." I thought it was better to lay his embarrassment on that old affair, you see. But that was all nonsense: he never saw anybody like Clarice before – how should he?

"Confound you, Bob," he muttered between his teeth, "so you've been practising your openhearted innocence on me. Get on with it now, and finish it up."

He pulled himself together, and I went through the introduction with due decorum; then I got away as soon as I could. You see, I was unmanned by the spectacle of so much young emotion, and somewhat exhausted by my own recent exertions. I found a cool corner in the library; and presently Jane had to come in. "What is the matter with you, Robert? Why do you sit there grinning like an idiot?" Perhaps a smile of benevolence had overspread my striking countenance; and that's the way she distorts it. I could not tell her what pleased me, so I said I had been reading a comic paper. "You write your own comic papers, I suspect; and bad enough they are. If you go on at this rate, you will end by editing the Texas Siftings. Do try to be decent, brother, while you have a guest in the house." I suppose she thinks that is a crushing rebuke, now. I said I would try, and told her she had better join Clarice and Hartman, who would probably be tired of each other by this time. Here again I have played into the Princess' hands. She doesn't want Jim to see too much of her at first, but to get used to the blinding glare by degrees, and take his physic in small doses, until he can bear it in larger. At least I hope so: if I've made a mistake and spoiled the procession, I'll learn it soon enough. But Jane wouldn't go unless it was right: that's the good of being a woman. You don't catch me interrupting them, or going near the Princess when she has any of her procedures on foot, unless I am called.

I could not tell you all that occurred that week; but it went exactly as Clarice intended and had foretold. She was gracious and equable and gentle, a model young lady of the social-domestic type; but Hartman did not see much of her. I on my part was kept steadily occupied, what with boats, and horses, and parasols, and fans, and wools, and wide hats, and more things than you could think of. It was, "Robert, come out on the cliffs," or "Robert, get my garden gloves, please; they are in the sitting-room, or somewhere else;" or "Robert, take me to town; I must telegraph to Constance;" or "Bob dear, would you mind running over to Miss Bliffson's, and telling her that I can't go to the Society this afternoon; and on your way back, stop at the milliner's and see if my hat is done." I usually attended to these commissions promptly; when you have women about, your generous heart will rejoice to protect and indulge their helplessness. They are the clinging vine, you are the sturdy oak; and then, as I said, Clarice is an orphan. Hartman at first showed an inclination to relieve me of the lighter part of these useful avocations, such as taking her about over the rocks and in the bay; but she very quietly, and without the least discourtesy, made him understand that no foreigners need apply for that situation. Other men were coming after her every day, but she avoided them or sent them to the right about: she can do that in a way to make you feel that you have received a favor. She kept reminding me that it was my business to wait on her: if these things were paid for in cash, I should want high wages, for the duties are far from light. But I can stand it: within the bosom of Robert T. glows a spark of warm and pure philanthropy. When I see my fellow-creatures in need, and this good right arm refuses to extend its friendly aid, may my hand cleave to the roof of my mouth – O well, you know what I mean. I used to retire to my meagre and philosophic cot-bedstead with aching limbs and an approving conscience: I never was worked so hard before. Some of these errands were perfectly needless, I knew. She can't want to get me out of the way for an hour or two, for I am never in